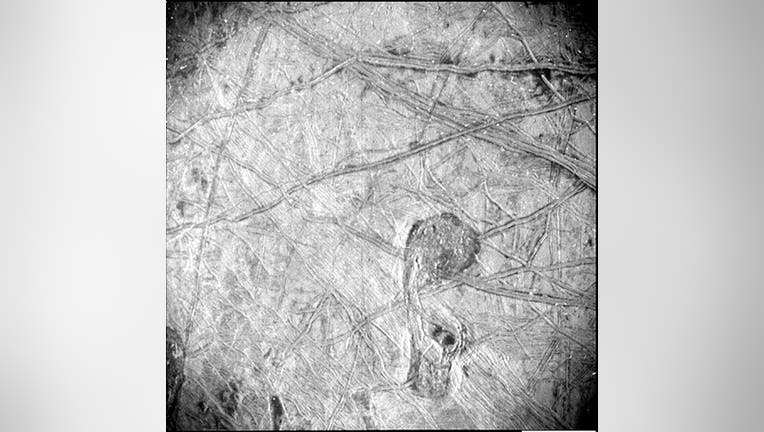 NASA’s Juno spacecraft has captured the highest resolution photo yet of Jupiter’s moon Europa, giving scientists an up-close view of "a puzzling region of the moon’s heavily fractured icy crust."

According to NASA, the image covers about 93 miles by 125 miles of Europa’s surface. The region, NASA says, includes a network of fine grooves and double ridges, as well as dark stains that could indicate something from below erupting on the surface. The white dots in the picture are features of penetrating high-energy particles from the severe radiation surrounding the moon.

"This image is unlocking an incredible level of detail in a region not previously imaged at such resolution and under such revealing illumination conditions," said Heidi Becker, the lead co-investigator for the SRU. "The team’s use of a star-tracker camera for science is a great example of Juno’s groundbreaking capabilities. These features are so intriguing. Understanding how they formed – and how they connect to Europa’s history – informs us about internal and external processes shaping the icy crust."

On Sept. 29, Juno zipped within approximately 219 miles (352 kilometers) of Europa, thought to have an ocean flowing beneath its thick frozen crust, raising the possibility of underwater life. Scientists hailed the flyby as a success, with four pictures beamed down and released within several hours.

Europa is the solar system’s sixth-largest moon with about 90% the equatorial diameter of Earth’s moon.

The galactic slam occurred at a harmless asteroid 7 million miles (9.6 million kilometers) away, with the spacecraft named DART plowing into the space rock at 14,000 mph (22,500 kph). Scientists expected the impact to carve out a crater, hurl streams of rocks and dirt into space and, most importantly, alter the asteroid’s orbit.

The latest observations will help NASA plan for its Europa Clipper mission, due to launch in 2024 and arrive at the Jovian system in 2030. The European Space Agency also plans close encounters with its Jupiter Icy Moons Explorer, or Juice, lifting off next year.