LOS ANGELES - As a new year fast approaches, many Americans are looking to advance or change their careers, a new survey shows.

According to Workhuman, which polled 1,000 full-time U.S. employees in December, the majority of respondents (60%) felt somewhat valued or not at all valued at work.

The company said employers shouldn’t take this notion lightly, especially when they looked at the participant’s regrets from the past year.

Among the top regrets: one-third regretted working too much and one-quarter regretted not setting stricter boundaries at work.

On top of that, only 4.3% of survey respondents regretted quitting a job that didn’t end up being better, suggesting that those who partook in the "Great Resignation" during the COVID-19 pandemic aren’t currently having great regrets.

When Workhuman asked employees about their 2023 resolutions for themselves at work, nearly 48% of respondents hope to get promoted or a raise. Another 32.1% hope to find a new or higher-paying job. 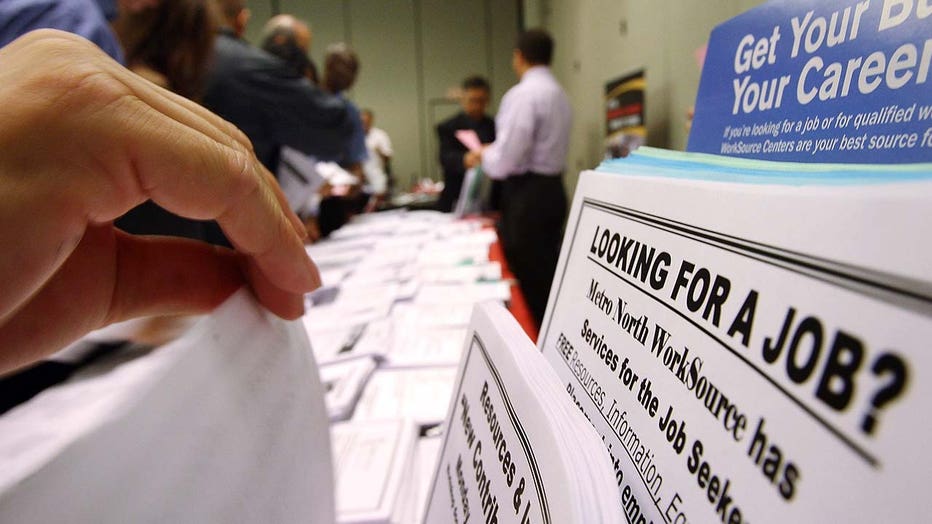 Job seekers look over job opening fliers at the WorkSource exhibit, a collaborative effort by governmental agencies to offer jobs and job training resources at the Greater Los Angeles Career Expo at the Pasadena Convention. (Photo by David McNew/Gett

Earlier this year, Pew Research looked into the driving factors behind Americans leaving their jobs and found that low-wage workers were most likely to have quit.

There's been broad speculation that older workers, who were close to retirement, drove the resignation wave by opting to retire early, but Pew found young workers were more likely to have walked away.

The top motive in that survey was a tie. Among people surveyed who'd left a job in 2021, 63% said low pay was a driving factor. Another 63% also cited a lack of advancement opportunities.

Meanwhile, desperation to fill those empty spots that workers deemed to be too dead-end has contributed to the average wage increase of 4.5% last year; the biggest bump in years.

The Bureau of Labor Statistics reported that the American economy added 263,000 jobs in the month of November.

"Since the start of this administration, our economy has added 10.5 million jobs and there are now over one million more jobs in America than before the pandemic began," the department said.

Despite workers’ regrets, many survey participants have positive career expectations for 2023.

Survey respondents were 3 times as likely to believe employees will be more vocal about their needs in the workplace in 2023, and when Workhuman asked employees to describe 2023 in one word or phrase, many positive words topped the list including, "new beginnings," "success," "comeback" and "work-life balance."