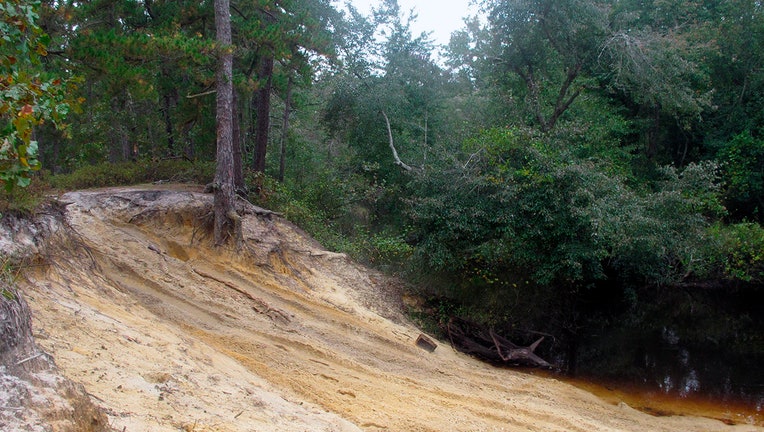 Tire tracks cut into an area near a river in Wharton State Forest in Shamong, N.J., Oct. 13, 2021. Hikers and environmentalists who use New Jersey's Pinelands say the state is not doing enough to protect the fragile woodlands from damage from illegal

The state Department of Environmental Protection says it is planning two significant initiatives to address illegal vehicle use in the Pinelands: requiring vehicle users to register with the state later this year and obtain a permit to operate in the district, and the creation of an interactive map showing where off-road vehicle use would be approved or prohibited.

Interested parties can comment on the map, including circling areas of concern. The tool could be ready by April, the department said, and will be used to help create final maps for vehicle use.

Many people who hike the Pinelands point out giant mud holes carved by those vehicles. They say they come across barriers that were run over or chain-sawed to allow vehicles into forbidden areas and find tire tracks cutting gashes through otherwise pristine forests.

"When seeking something beautiful, you find instead a hilltop ripped to shreds, or you don't even get there because the road is bombed out with monster truck ruts," said Jared Flesher, who spent four years on a documentary film about damage to the Pinelands caused by recreational vehicles.

Lee Yeash, a Pinelands conservationist, says she no longer wants to hike in the woods.

"No matter where I have gone, I have been run off the trails by ATVs and motorbikes," she said. "I can't walk on the Batona Trail and not be run off by motorized vehicles. I can't walk on trails I used to hike because they have been washed away due to (off-road vehicle) destruction."

"I have done what I can to tolerate and share the Pines with other groups, but they have won," she said. "I will not go back. The DEP has done nothing to help me despite calls, letters, emails and activism."

Shawn LaTourette, the DEP commissioner, said the state is obligated to balance the competing demands of users.

"It's not as though there's one group that's noble and one group that isn't," he said. "It's far too easy to idealize one party and villainize another. It's not the case that every off-road vehicle user is a bad guy, and not every environmentalist is automatically virtuous." 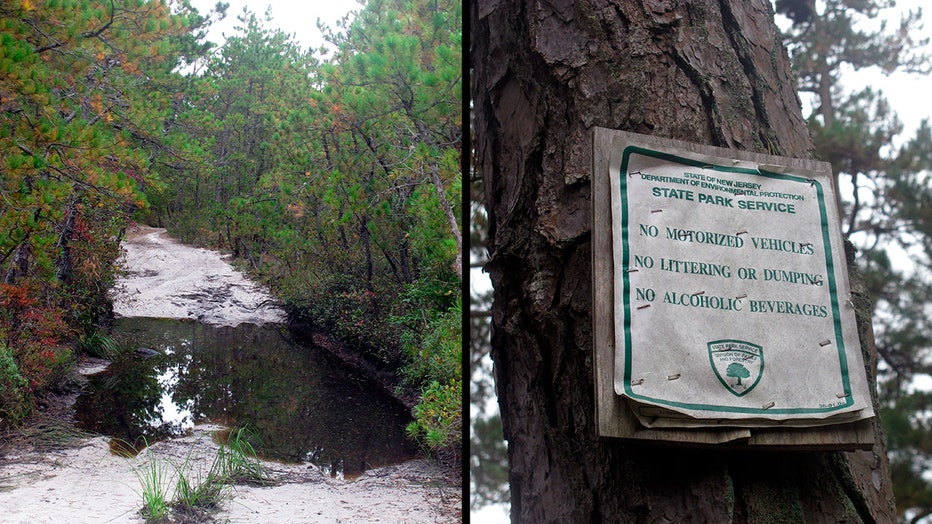 A giant flooded hole made by vehicle tires on a dirt road (left) and a sign tacked to a tree in Wharton State Forest in Shamong, N.J., Oct. 13, 2021. (AP Photo/Wayne Parry)

Albert Horner, a Pinelands nature photographer and advocate, said the state has shown itself incapable of protecting the Pinelands by failing to make difficult choices.

"If you are trying to appease all the stakeholders, it is a no-win situation," Horner said. "If there was a group called the New Jersey Bulldozer Association or the New Jersey Tree Axing Association and they wanted to use our public lands, would you give them permits? The only way to get around the multiple stakeholder issues is for the DEP to determine what are proper uses for our public lands."

Created by an act of Congress in 1978, the Pinelands district is overseen by a joint federal and state commission. It occupies 22% of New Jersey's land area and it is the largest body of open space on the mid-Atlantic seaboard between Richmond, Virginia, and Boston. It also includes an aquifer that is the source of 17 trillion gallons of drinking water.

New Jersey employees patrol the state forests within the Pinelands to enforce rules against illegal vehicle use. Amanda Smith, chief of the State Park Police, said there are 80 park officers statewide, adding the department hopes to add staff this year. They use extra patrols, targeted operations and drones to identify illegal vehicle use, she said.

Sometimes, she said, drivers "go off the road into areas that are very sensitive with an intent to do damage." But other times, she added, it can be a matter of a rider not knowing they are in a prohibited area.

An association for a type of motorcycle riding course called "enduro" in which riders traverse a narrow track through the woods and pass checkpoints at specified times, said a small minority of riders stray from permitted areas or otherwise break the rules.

"We are not here to defend scofflaws, people doing illegal activities in the woods," Thomas Hedden, an official with the East Coast Enduro Association, said. "We're not the monster truck guys, the ones ripping up the water holes on roads. We own our mistakes and we've been sanctioned for our mistakes. We self-police, and we're doing all the steps we've been asked to do."

Public forests around the country are dealing with similar issues. Noise from all-terrain vehicle traffic in Moab, Utah, recently led the local government to pass a temporary moratorium on new rental businesses, and to lower speed limits for them.

Tennessee stepped up enforcement this year of illegal off-road vehicle use. Marble, Colorado, agreed to pay part of the cost of a forest ranger to keep an eye on a heavily used trail that has been the source of numerous complaints.

Confrontations have turned violent. In March, a mountain biker in Bellingham, Washington, was stabbed after a right-of-way dispute with hikers on a popular trail.

In New Jersey's Pinelands, Richard Lewis has hiked deep into Wharton State Forest for years to photograph a stand of old-growth Atlantic White Cedar trees, but was shocked by what he saw on a recent visit.

"The trail had tire tracks from what looked like a dozen ATVs," he said. "The tire tracks tore through the area creating a path that cut through young stands of cedar trees and other undergrowth in what was a beautiful piece of pristine forest."