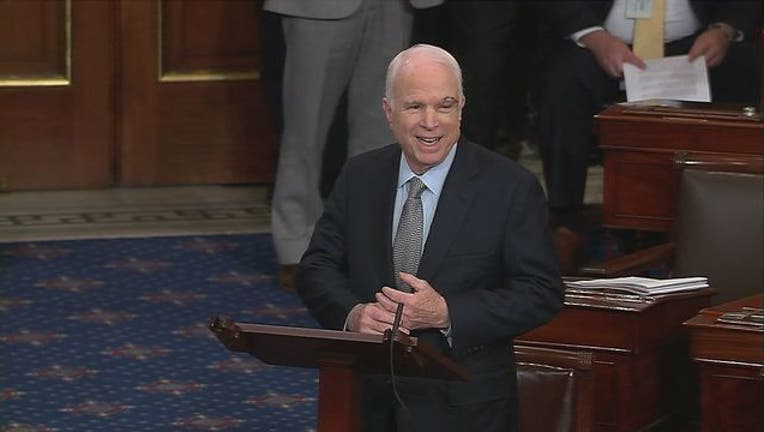 Sen. John McCain returned to the U.S. Senate after being diagnosed with brain cancer on Tuesday, July 25, 2017.

PHOENIX (KSAZ) - Figures from a new Rasmussen Poll shows likely GOP voters believe McCain should resign from the Senate before May 30.

On July 19, 2017, Sen. McCain's office announced the longtime Senator has a form of brain cancer known as a glioblastoma.

Recently, a White House staff member sparked controversy after reports surfaced that she mocked McCain's brain cancer diagnosis by saying "he's dying anyway". The comments reportedly came about, due to McCain's announcement of his opposition to President Trump's pick to lead the CIA. The statement was met with a rebuke by Cindy McCain, via a tweet made on her verified Twitter account.

According to a statement released Thursday by Rasmussen Reports, figures from a national telephone and online survey that was conducted on May 10 and 13 shows 62% of likely GOP voters believe McCain should resign, in order for a replacement to be selected in the November election.

In contrast, figures show 27% of GOP voters believe Sen. McCain should hang on past May 30, and 11% are undecided.

According to the statement, figures also show 52% of Republicans now have an unfavorable opinion of McCain. The survey of 1,000 likely voters was reportedly conducted on May 10 and 13, and the margin of sampling error is plus or minus (+/-) 3.3 percentage points, with a 95% level of confidence.

FOX 10 Phoenix is reaching out to the Senator's office for comment.

Meanwhile, the Associated Press is reporting that the staff member's remarks about McCain (see above) has not yielded widespread White House soul searching, but instead produced a push to fire those responsible for the leaks that have bedeviled President Donald Trump's administration.

The administration has dug in its heels and repeatedly declined to publicly apologize, but the fallout has shaken the West Wing, where the focus remains on who leaked it to the media, and staffers have braced themselves for a possible firing in the coming days.