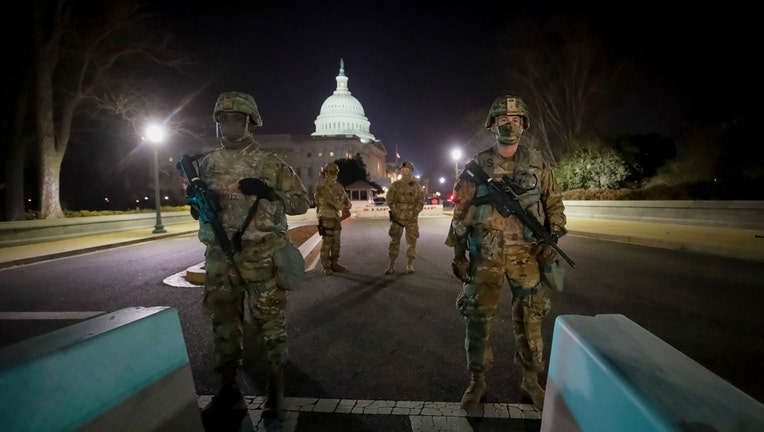 NEW YORK - National Guard troops from units around the country have been pouring into Washington, D.C., ahead of Inauguration Day to help safeguard the city during the presidential transition.

The governors of New York, New Jersey, and Connecticut were among those who answered the call from the Pentagon to send citizen-soldiers and citizen-airmen to help local and federal law enforcement agencies protect the U.S. Capitol, the National Mall, and other areas around the nation's capital as President Donald Trump leaves after a tumultuous term and Joe Biden is sworn in as president.

The U.S. Secret Service, which is in charge of all inauguration-related security, the U.S. Park Police, and the U.S. Capitol Police requested support from the National Guard. About 25,000 troops have been deployed.

The calls reflect fears that violent extremist groups are targeting the city in the wake of the deadly insurrection at the U.S. Capitol on Jan. 6. The threats range from armed insurgents to possible attempts to plant explosive devices at so-called soft targets.

Thousands of National Guard troops are in Washington, D.C., to help with security.

New York deployed 1,000 National Guard troops to Washington in the wake of the Capitol insurrection. Then on Friday, Gov. Andrew Cuomo agreed to send another 250 soldiers and airmen at the request of Secretary of the Army Ryan McCarthy.

"The peaceful transfer of power is central to our Democracy, and New York State will do everything in our power to help protect that basic American right," Cuomo said in a statement. "On behalf of the family of New York, I am grateful to the brave men and women in uniform who keep us safe."

Gov. Phil Murphy signed off on the deployment of 500 members of the New Jersey National Guard to Washington the day after the riots.

"Our republic is built on the principles of democracy, peace, and the right of the American people to freely choose their leaders," Murphy said in a statement on Jan. 7. The brave men and women of our National Guard will be deployed in order to preserve these sacred principles."

The appeals for more of America's citizen-soldiers also underscore the Pentagon's limits on the use of active-duty troops. Under the law, they can't be used for law enforcement, and officials are intent on avoiding the appearance of armed active-duty forces being used against U.S. citizens on American soil.

Military officials have removed 12 U.S. Army National Guard members from inauguration security duties. U.S. officials said that two guard members were found to have ties with right-wing militia groups or posted extremist views online and the other 10 showed "questionable behavior" unrelated to extremism but were flagged by the FBI.

Thousands of National Guard troops, federal agents, and police officers are working to secure Washington ahead of and on Inauguration Day. The NYPD is sending about 200 cops to DC to help.

Some guardsmen will be deputized as special police officers to assist the U.S. Capitol Police, U.S. Park Police, and D.C.'s Metropolitan Police Department for specialized assignments, such as protecting members of Congress, congressional staffers, and the grounds of the U.S. Capitol.

The Pentagon has authorized troops from the National Guard to be armed with deadly weapons during the deployment in D.C., depending on their specific missions.

Answers to your questions about Inauguration Day 2021

FOX 5 NY requested comment from the National Guard Bureau, the New York State Division of Military and Naval Affairs, and the Department of Military and Veterans Affairs why many troops in Washington could be seen in photos and videos armed with rifles that didn't appear to be loaded with ammunition clips.

In an email, a National Guard Bureau spokesperson could not comment on specific "security procedures and arming for individuals."

"We are here to support law enforcement agencies and are armed or unarmed at their request," spokesperson Nahaku McFadden said. "This is a law enforcement event led by Secret Service and supported by DoD. The National Guard remains flexible and will adjust as directed." 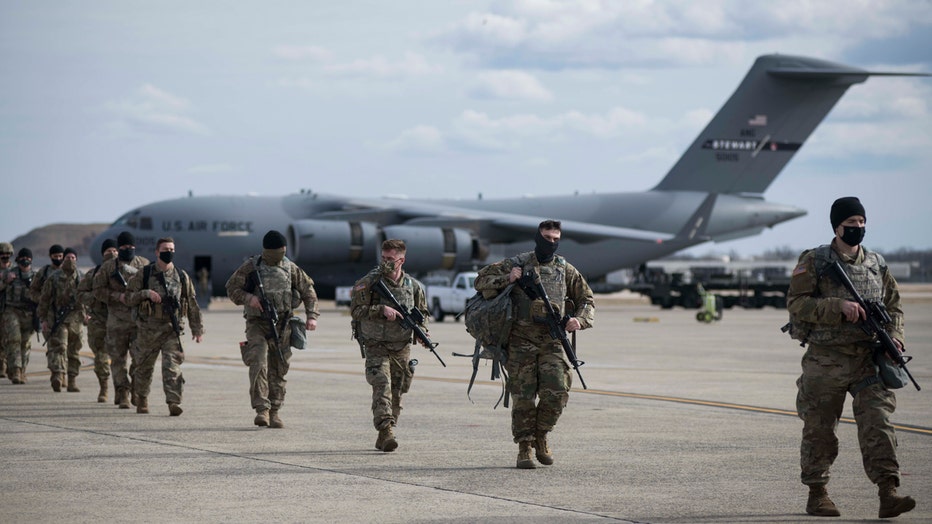 A spokesperson for New York's Division of Military and Naval Affairs emailed FOX 5 NY a statement from Army Gen. Daniel Hokanson, the chief of the National Guard Bureau and a member of the Joint Chiefs of Staff.

"National Guard members are postured to meet the requirements of the supported civil authorities, up to and including protective equipment and being armed if necessary," Hokanson said in the statement. "The public's safety is our top priority."

The general said that federal law enforcement requested that the National Guard be armed for this mission.

"For the safety of all involved, and in close coordination with the agencies we are supporting, our Guard members are armed and equipped commensurate with the missions they have been asked to do," Hokanson said. "This is what we do. We are trained and ready."