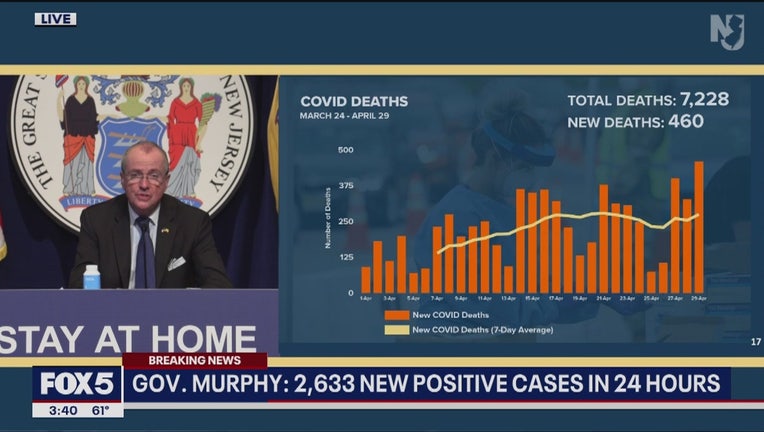 NEW JERSEY - While New York has been the epicenter of the coronavirus outbreak in the United States, New Jersey is now starting to report more daily deaths than New York.

On Thursday New Jersey reported a new daily high of 460 deaths. New York's number had dropped to 306 for the previous 24 hours.

For the past three days, New Jersey has reported 1,191 deaths statewide while New York has recorded 971 deaths.

While the numbers in New Jersey are trending higher, New York has seen a much larger number of cases and deaths overall.

New Jersey Gov. Phil Murphy met with President Donald Trump in the Oval Office to discuss the billions of dollars in federal aid that Murphy said his state will need because of the coronavirus pandemic.

New Jersey Gov. Phil Murphy said Thursday during a friendly Oval Office meeting with President Donald Trump that the state could need $20 billion to $30 billion in assistance to deal with COVID-19 fallout.

The state has been working toward doubling its testing capacity for weeks, Murphy has said previously. It's unclear how the increase will be achieved, but boosting testing is one of the preconditions Murphy has set for reopening the state.

On Monday, Murphy announced that a stay-at-home order would stay in place indefinitely in New Jersey because of the coronavirus outbreak.

"Maintaining our social distancing isn’t just about getting us to the point where we can begin our restart – it’s about saving lives," the governor said. "That's our end goal – to save lives."