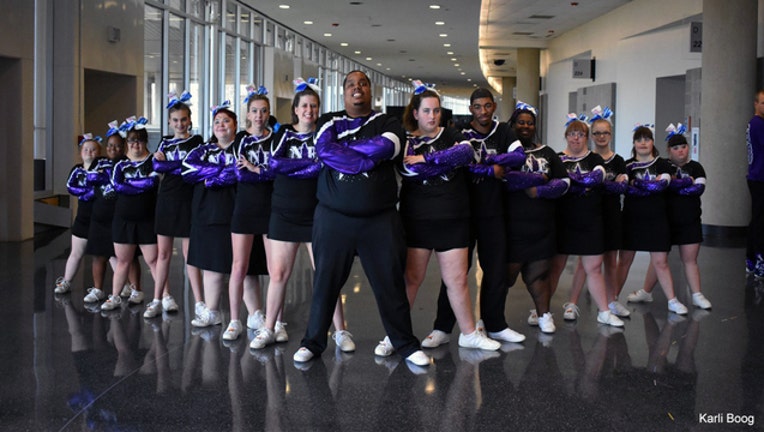 The Nor' Eastern Storm Shooting Stars from Salisbury, Maryland (photo via Karli Boog).

SALISBURY, Md. - (AP) — In 2010, a group of local cheerleading enthusiasts came together to determine whether Salisbury was a viable place to create a special needs cheer team.

Deciding the squad would be beneficial to people with disabilities throughout the region, Lauri Andrews, Katya Andrews and Karli Boog, led by Pam Duke, decided to get the ball rolling and establish the Nor' Eastern Storm Shooting Stars.

Months later, the squad was official as 10 members joined the inaugural team, with Duke, the owner of a small gym, providing the appropriate setting for practices.

The program was designed to enhance cheerleading skills, provide motivation and give the members a space to learn a new sport they may never have had the chance to experience.

But seven years later, the Shooting Stars are the best in the country, winning the top prize at the National Cheerleading Association All-Star National Championship in Dallas, Texas.

The squad competed against 10 other teams throughout the country in the cheer abilities division, putting on their routine in front of a crowd of 4,000 people.

"The environment just made them feel so welcomed," Boog said. "The way we see them, everyone else finally saw them in the same way. What they were doing was extraordinary, and it was just a lot of fun."

The team traveled to Texas on Feb. 20 and competed the following weekend. Walking into the Kay Bailey Hutchison Convention Center, the members of the squad were blown away by the number of teams that had made the trip to compete.

Cheerleaders from around the country and world would display their strongest routines to a panel of judges.

In their first day of competition, the Shooting Stars entered the warmup area, went through their morning stretches and prepared for their routine.

But little did they know, their road to the national stage had yet to be completed.

Due to the enormous size of the arena, the Salisbury team had to walk an extremely long distance just to get to their competition spot. With an excessive amount of movement difficult for some of the cheerleaders, the journey itself was enough to exhaust several of the athletes.

"It was a mile walk from warmups to where we competed," Boog said. "It took everything they had (to get there). We were trying to do whatever we could to pump them up."

When they finally reached their destination, Boog and the other coaches were surprised by what they heard. Other members of the squads they would soon compete against were cheering for the Shooting Stars.

One member of an opposing team came over and comforted one of the team's cheerleaders who had become emotional prior to the competition.

With a new support system backing them up, the 15 members of Salisbury's cheerleading team ran out onto the mat with a new sense of determination and motivation.

"I think it was a huge boost for their confidence, and I think it made them feel very special," Katya Andrews said. "For them, it's just another competition. We had a lot of confidence going into it."

No longer feeling the nerves, the Shooting Stars took the mat at the biggest cheer event in the nation.

Running a routine that featured tumbling, stunts and jumps, the squad earned nearly a perfect score from the judges.

As the results were tallied, it was announced the Nor' Eastern Storm All-Star Cheer team finished at the top of the division.

The Shooting Stars were national champions.

"It was pretty amazing," Boog said. "All of our kids cried at the end. When they announced our names, the entire place went crazy. It was a once-in-a-lifetime moment."

Though it is the team's first title competing at such a big venue, the Shooting Stars have seen their share of success over the past year.

In January 2017, the team won its first national championship at the Maryland Cup Nationals in Upper Marlboro, Maryland. It has also received first place awards at four additional competitions in state and national events.

While they were given a week off after arriving back to the Shore, the Shooting Stars were right back at work come March, preparing for their final competition of the season.

In April, the team will compete in an Ocean City competition, but with a national championship under its belt, equipped with stylish jackets that were handed out to the squad, the team is even more confident than it was before.

"We just want to keep growing and see what we can get them to do, especially on their own," Katya Andrews said. "That was one of the biggest things the judges talked to us about. What's the next step? What can they do on their own without our help?"

However, past the cheers and awards, the mission has always remained the same — helping special needs athletes discover their potential.

"We always knew we were pretty good," Katya Andrews said. "To know seven years of hard work has finally come to fruition and we showed that we're one of the best, it's just a great feeling."