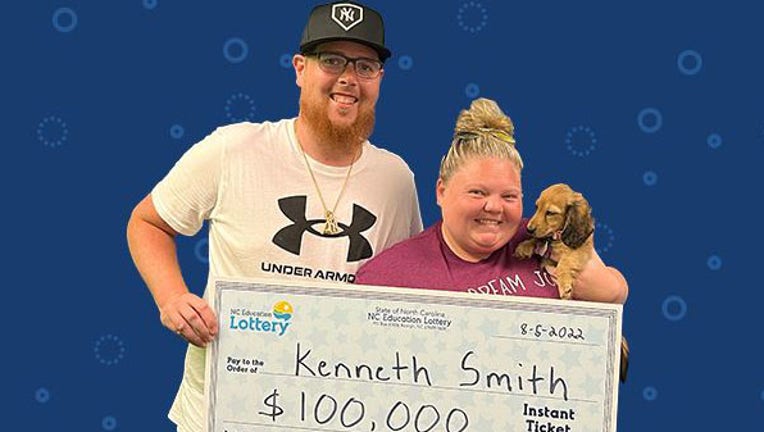 Kenneth Smith, of Greensboro, North Carolina, won a $100,000 lottery prize while he and his wife were celebrating their second wedding anniversary at the beach. They are pictured with their 9-week-old puppy. (Credit: NC Education Lottery)

A man in North Carolina won $100,000 in the lottery while he and his wife were celebrating their anniversary at the beach.

Kenneth Smith, 33, of Greensboro, North Carolina, bought a $100 Million Mega Cash scratch-off lottery ticket at a gas station in Calabash, according to the NC Education Lottery.

Smith told the NC Education Lottery that he went to that particular store and bought a lottery ticket based on a friend’s recommendation, a press release said.

"I’ve always fantasized about winning a big prize in the lottery," Smith said.

Smith told the lottery group that he plans to use his winnings – which ended up being $71,016 after taxes – for home improvements and a fence for his family’s new puppy, a 9-week-old dachshund.

In the press release, the NC Education Lottery said that two $2 million prizes and four $100,000 prizes remain to be claimed from the $100 Million Mega Cash game.