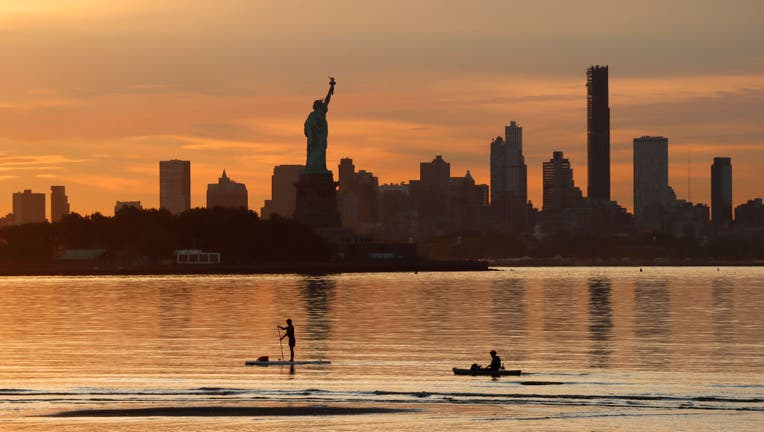 Two people paddle past the Statue of Liberty and the skyline of Brooklyn as the sun rises in New York City on August 15, 2022, as seen from Jersey City, New Jersey. (Photo by Gary Hershorn/Getty Images)

According to a new report. New York and New Jersey are among the five best states to live in the United States. But which one is the best?

Personal finance website WalletHub took a look at all 50 states in the union, ranking them based on various key indicators of livability, like affordability, education, quality of life, safety and more.

Massachusetts took the #1 spot, with the nation's best education and health. New York and New Jersey followed closely behind, but which one ranked the highest?

The answer would be the Garden State. New Jersey was ranked #2 on WalletHub's list, ranked as the safest state in the nation, also earning high marks for education and health (5th) and qualify of life (7th).

New York followed right behind at #3, taking the top spot for quality of life and finishing second in safety.

It will not come as a surprise to anyone living in either state that both scored poor marks for affordability (New Jersey ranked 48th, while NY ranked 46th). Both states also scored poorly for economic considerations.

Idaho and Virginia rounded out the rest of the top 5, while New Hampshire, Florida, Wyoming, Minnesota, and Wisconsin filled out the top 10.

Connecticut finished well off the pace in 25th place,