Six adults were shot and injured Wednesday afternoon on the King Estates campus in Oakland. Police say all of the victims are affiliated with the schools, but did not say to what extent. No arrests have been made and police have not shared any suspect information as of yet.

OAKLAND, Calif. - Six people were injured in a shooting on an Oakland school campus – the worst Bay Area school shooting in recent history and one that drew condemnation from local and state leaders.

Oakland police said the shooting happened on the King Estate campus, which is comprised of a cluster of schools — Rudsdale Continuation School, Newcomer high schools, BayTech Charter School, and the headquarters of Sojourner Truth Independent Study.

Authorities said two of the victims were found inside Rudsdale Continuation School.

According to a spokesman for Highland Hospital, three of the shooting victims were brought to the trauma center. The other three victims were taken to other local hospitals.

All six victims are adults, Oakland Mayor Libby Schaaf tweeted. Police said all six victims have some affiliation with the campus where the shooting occurred, but it's unclear in what capacity.

Officials responded to a 12:45 p.m. report of a shooting on Wednesday. Oakland police said they were investigating a shooting in the 8200 block of Fontaine Street in East Oakland. Police said they are looking for one shooter, but that more people may have been involved.

A parent told KTVU that she witnessed five potential shooters.

Another parent said that he was speaking to his 13-year-old daughter on FaceTime when he heard gunshots in the background. She was huddling under a desk when she called her dad.

"I didn't have too much information, but I just rushed over," said the father. "I was about to rush the police. I was first in line, and they wouldn't let me through I asked them, ‘What if it was your daughter?'"

Six people were injured in a shooting at an Oakland school on Wednesday. Officials say they're looking for one shooting suspect who is still on the run. 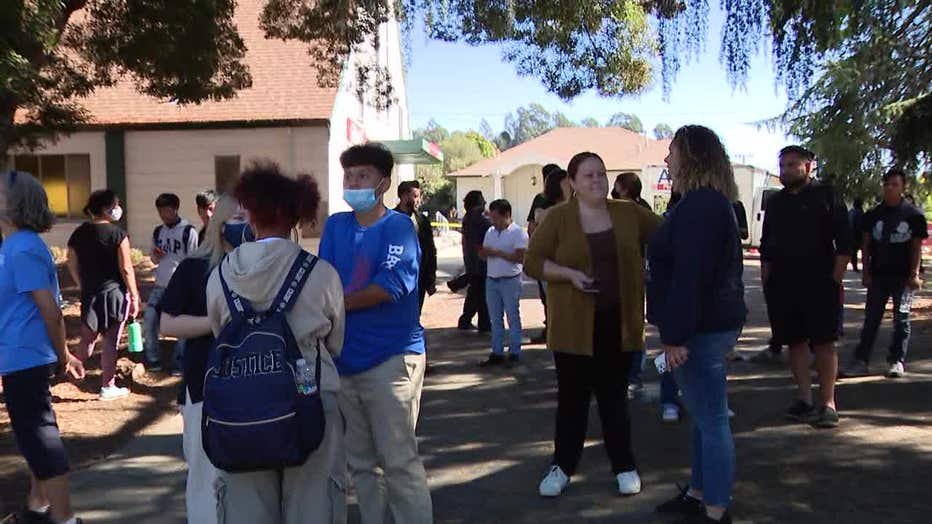 Parents and students congregate outside church where they are reuniting after Oakland school shooting. Sept. 28, 2022

The campus was deemed to be cleared of danger a little after 3 p.m., according to Schaaf.

Video shared with KTVU showed students hiding under desks earlier in the afternoon.

A few hours after the incident unfolded, the Oakland Unified School District released a statement that said "there was an incident today at the King Estate campus" but did not provide specifics.

"Please understand this is still an active situation, and ​information is still forthcoming," OUSD said.

Authorities said all students at the affected campuses were reunited with their parents or guardians. Parents were directed to a reunification center at a church on Mountain Boulevard and Fontaine Street to pick up their children.

Several parents were seen hugging their children and feeling relieved at the scene. Parents expressed their sense of panic when they received robocalls from the school district about the incident and to head to the off-campus location to see if their child was OK. 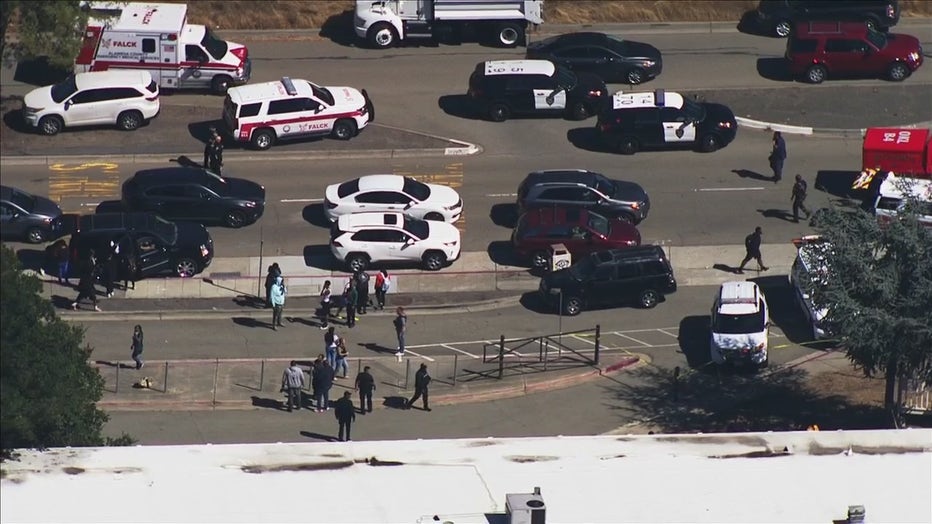 "Just fear for our children's safety and thinking maybe I should take her out of school," said one parent we spoke with. She said she's now considering homeschooling her daughter because of an overall fear for her child's safety. "It's sad," she said with an exasperated sigh. "It's sad and I feel like there has to be something done about it. You know, people need to be held accountable. It's not OK. These are children." She added that she'd like to see more security at the schools.

School officials said counselors are already available to students and staff who need them.

Oakland Education Association President Keith Brown issued a statement. He acknowledged how in August, a 12-year-old shot a 13-year-old classmate at Madison Park Academy in Oakland. Parents criticized the school district for not quickly notifying them about that shooting.

"We've been through this just a few weeks ago, and we can't wait any longer to come together to invest in real solutions. Educators are committed to doing whatever it takes to keep our schools safe. We have major concerns over the resources that are readily available to support the needs of our students. Our schools should be safe havens for students, free from the fear of gun violence," Brown wrote.

OUSD issued an updated statement on Wednesday to say that there would be no school on King Estates Campus on Thursday.

"What I know is guns are on our campuses where our babies are supposed to be protected and that is out of control," said Taylor. "We need to do more to protect the lives of our kids that means bringing in the resources, keeping the guns off the streets."

In a tweet, California Governor Gavin Newsom called the shooting a horrifying act of violence.

"Today’s shooting at an Oakland school was a horrifying act of violence that has grown too familiar," said Newsom. "Yet again, our kids were in the crossfire. This cannot continue — gun violence has taken too much from our communities."

At an afternoon news conference from Highland Hospital James Jackson, CEO from Alameda Health System spoke partly out of frustration over the situation.

"We’ve seen almost a doubling of the violent crimes victims that we’re seeing here at our facility. So something has changed. I’m a son of Oakland. I grew up in Oakland. This is not the Oakland that I grew up in," Jackson said. "I’m calling on community leaders…and I’m prepared to lean in myself…we’ve got to do differently. We’ve got to do something better."

Officials are asking anyone with information into contact Oakland police. 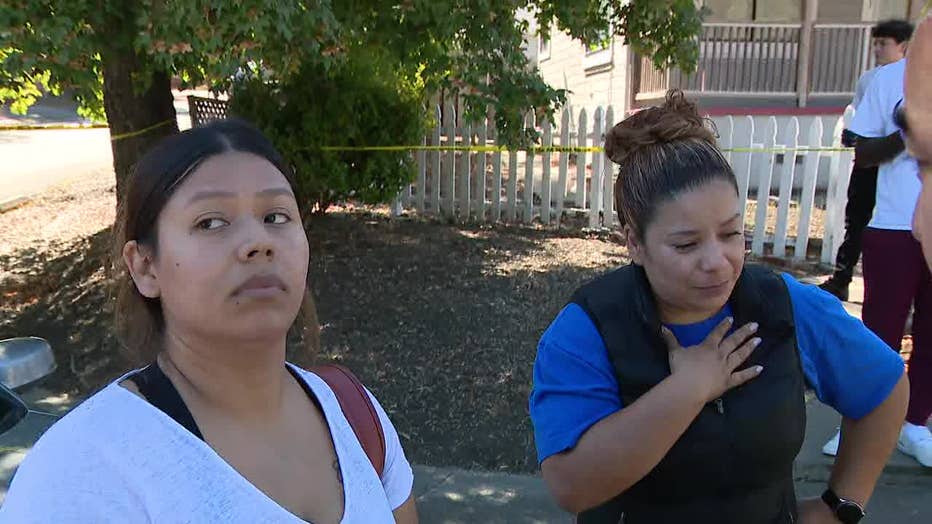 Parents are relieved to reunite with their children after an Oakland school shooting. Sept. 28, 2022 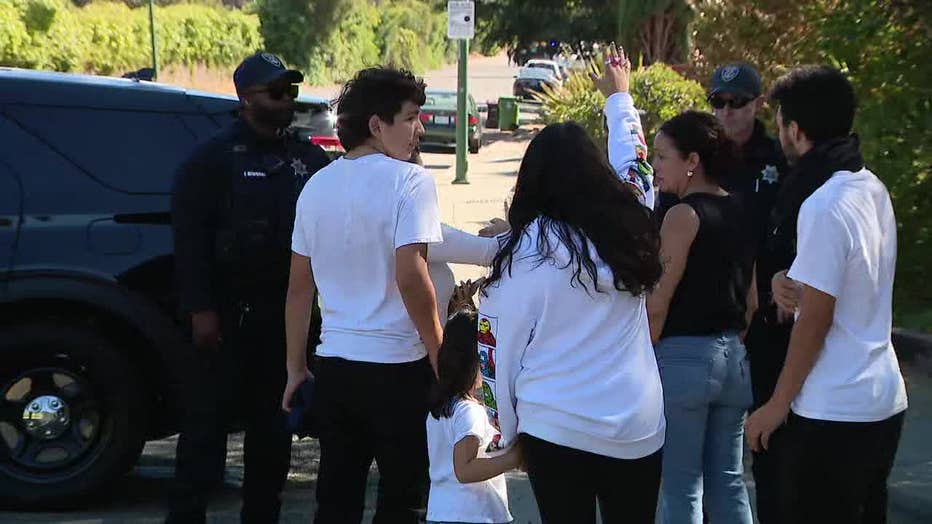 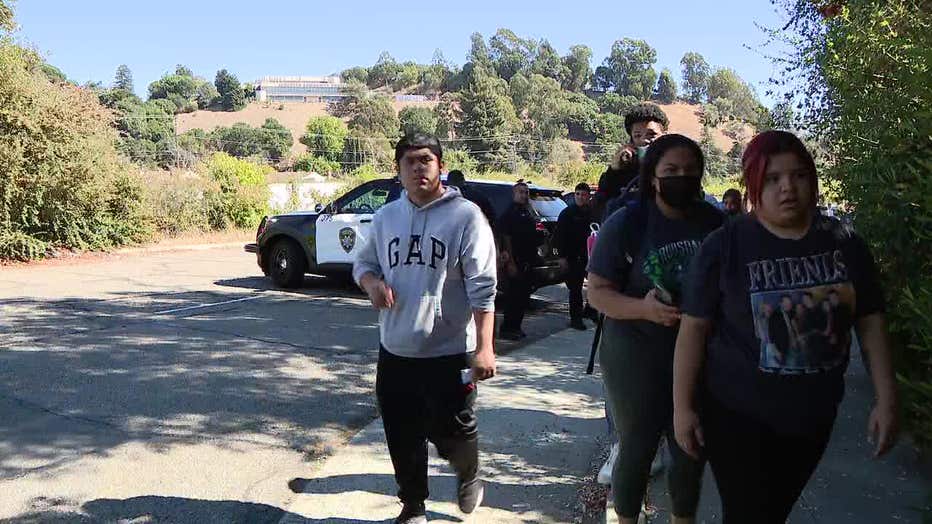