Prosecutors will start to present their case Monday against members of a far-right militia facing charges in connection to the Jan. 6 attack on the U.S. Capitol. The founder of the group is from Granbury.

WASHINGTON - The founder of the Oath Keepers extremist group and four associates planned for an "armed rebellion" to stop the transfer of presidential power on Jan. 6, 2021, prosecutors told jurors Monday at the opening of the most serious case to reach trial yet in the attack on the U.S. Capitol.

Assistant U.S. Attorney Jeffrey Nestler delivered his opening statement in Washington's federal court in the trial of Stewart Rhodes and others charged with seditious conspiracy. They are accused of a weekslong plot to stop the transfer of power from Republican Donald Trump to Democrat Joe Biden.

"Their goal was to stop by whatever means necessary the lawful transfer of presidential power, including by taking up arms against the United States government," he said. "They concocted a plan for armed rebellion to shatter a bedrock of American democracy."

The Oath Keepers planned their conspiracy "in plain sight," Nestler said, noting open letters Rhodes published on the group's website. They also used encrypted apps, like Signal, to message in secret and sometimes met in person, he said.

"They did not go to the Capitol to defend or help; they went to attack," he said.

An attorney for Rhodes, though, argued that prosecutors built their case on cherry-picked evidence like messages and videos and Oath Keepers were not involved with violence during the riot.

"The story the government is trying to tell you today is completely wrong," said Rhodes's lawyer, Phillip Linder. "Even though it may look inflammatory, they did nothing illegal."

The stakes are high for the Justice Department, which last secured a seditious conspiracy conviction at trial nearly 30 years ago.

About 900 people have been charged and hundreds convicted in the Capitol attack. Rioters stormed past police barriers, engaged in hand-to-hand combat with officers, smashed windows and temporarily halted the certification of Biden's electoral victory.

But the Oath Keepers are the first to stand trial on seditious conspiracy, a rare Civil War-era charge that carries up to 20 years behind bars. The trial is expected to last several weeks.

Prosecutors told jurors that the insurrection for the antigovernment group was not a spontaneous outpouring of election-fueled rage but part of a drawn-out plot to stop Biden from entering the White House. 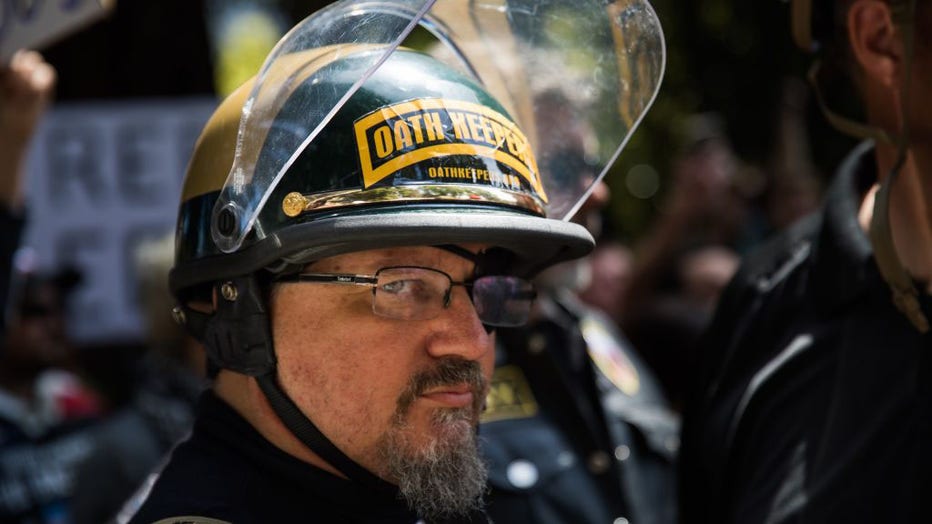 On trial with Rhodes, of Granbury, Texas, are Kelly Meggs, leader of the Florida chapter of the Oath Keepers; Kenneth Harrelson, another Florida Oath Keeper; Thomas Caldwell, a retired U.S. Navy intelligence officer from Virginia; and Jessica Watkins, who led an Ohio militia group. They face several other charges as well.

He provided the group in November with a step-by-step plan based on a popular uprising that brought down Yugoslavia's president two decades earlier, Nestler said.

By December, authorities say, Rhodes and the Oath Keepers had set their sights on Congress' certification of the Electoral College vote on Jan. 6.

Nestler read a host of messages, saying they showed the group becoming became increasingly desperate for action as the date approached. On Christmas Day, Meggs wrote they would have to make senators very "uncomfortable." Rhodes said in one message that Trump "needs to know that if he fails to act, then we will." When asked about a possible civil war, Caldwell responded: "I'm starting it the night of the 6th, if necessary."

The Oath Keepers organized training, including one session that was recorded on video and set to rock music, and stashed "weapons of war" at a Virginia hotel so they could get them into the capital quickly if necessary, prosecutors said.

Jan. 6 videos and photos were shown in court of Oath Keepers dressed in helmets, protective vests and other military gear marching toward the Capitol and pushing into the building.

When Watkins declared on the walkie-talkie app Zello that they were in the building, someone responded: "Get it, Jess. ... Everything we (expletive) trained for."

The air was heavy with pepper spray and smoke as Watkins tried to push toward the Senate chamber, Nestler said. "Simply entering the building was not enough," he said. They "needed to do more, they needed to actually get to the senators."

Some Oath Keepers went toward the House of Representatives to look for House Speaker Nancy Pelosi but couldn't find her, prosecutors allege.

Rhodes remained outside, "like a general surveying his troops on a battlefield," Nestler said.

After the attack, the Oath Keepers were "elated," the prosecutor said. "They were boastful, they were proud. They were prepared to continue their efforts, even escalating their use of force, to accomplish their goal."

In the days between the riot and Biden's inauguration, Rhodes spent more than $17,000 on firearm parts, ammunition and other items, prosecutors say. Around the time of the inauguration, Rhodes told others to organize local militias to oppose the Democratic administration, authorities say.

"Patriots entering their own Capitol to send a message to the traitors is NOTHING compared to what's coming," Rhodes wrote in a message the evening of Jan. 6.

But that bravado quickly turned to worry as the Oath Keepers realized how much trouble they could be in, Neslter said.

Rhodes sped out of a restaurant while having dinner that evening and drove through the night back to Texas when he got word that police were looking for people involved in the riot, he said. He urged the Oath Keepers not to talk about what happened at the Capitol, saying in one message: "Let me put it in infantry speak: SHUT THE (EXPLETIVE) UP!"

Defense attorneys have said the Oath Keepers came to Washington only to provide security at events for figures such as Trump ally Roger Stone before the president's big outdoor rally behind the White House. Rhodes has said there was no plan to attack the Capitol and that the members who did acted on their own.

Defense lawyers are poised to argue that jurors cannot find him guilty of seditious conspiracy because all the actions he took before Jan. 6 were in preparation for orders he anticipated from Trump -- orders that never came.

Rhodes' attorney has said that his client will eventually take the stand to argue that he believed Trump was going to invoke the Insurrection Act and call up a militia, which Rhodes had been calling on him to do to stop Biden from becoming president. He was merely lobbying the president to use a U.S. law.

"They're not a violent group," Linder said during an opening statement that was far shorter than the prosecutor's remarks. "Rhodes is extremely patriotic ... he loves this country."

Nestler took aim at the Insurrection Act claim, saying it was only an attempt to cover up Rhodes' illegal scheme. "Rhodes, with a law degree was careful with his own words. Rather than say out loud their plan, they used a code - or shorthand - the Insurrection Act," he said.

In one message from December 2020, Rhodes wrote that Trump "needs to know that if he fails to act, then we will."