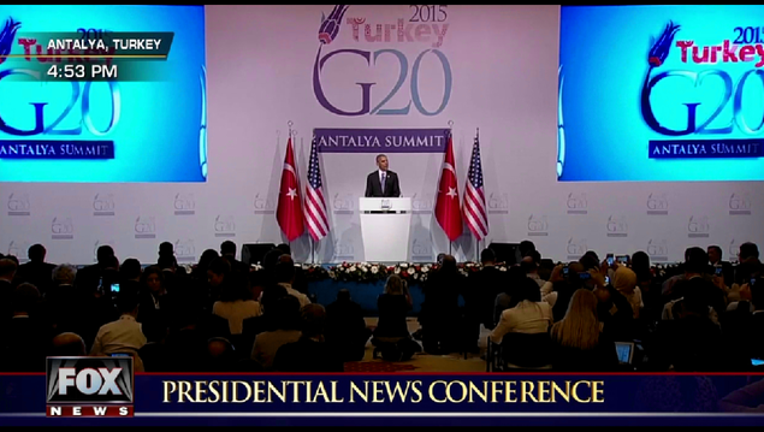 Antalya, Turkey - President Barack Obama says putting large numbers of U.S. troops on the ground to combat the threat from the Islamic State would be "a mistake." Speaking Monday from the G20 summit in Turkey, Obama said that is not just his view, but the view of some of his closest military and civilian advisers.

Obama spoke Monday at a news conference in Antalya, Turkey, at the close of a summit of 20 nations. The talks have been overshadowed by Friday's attacks in Paris that killed at least 129 people.

The president says the fight against the Islamic State terrorist threat requires participation of the people in Iraq and Syria to push back against ideological extremes.

French president Francois Hollande says he will meet with Obama and Russian Vladimir Putin in coming days `to join our forces.'

President Barack Obama is rejecting the notion that the United States has underestimated the ability of the Islamic State group in the wake of the deadly terror attacks in Paris.

Obama says the danger of the group is the reason the U.S. is operating in Iraq and Syria, and why it has mobilized 65 countries to go after IS.

Obama says one of the challenges of terrorism is to understand that a handful of people who don't mind dying can kill a lot of people.

The president says reducing the territory controlled by the group in Iraq and Syria will reduce the flow of fighters and lessen the threat it poses.  He says disrupting the threat requires constant vigilance and communication.
The Associated Press contributed to this report