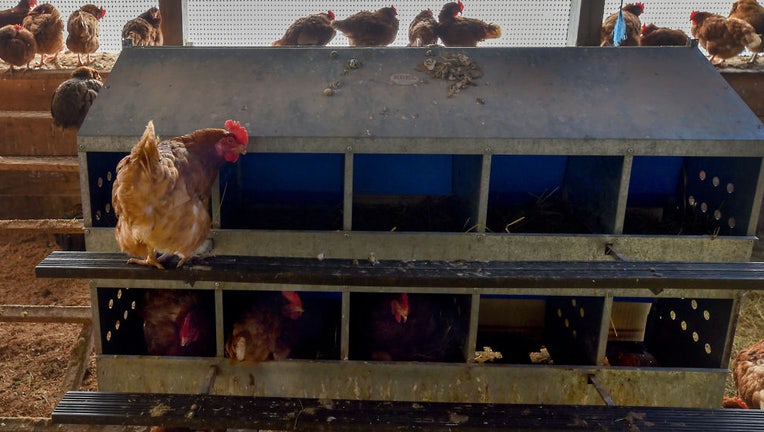 FILE-Hens lay eggs in nesting boxes while others seen near the windows inside a chicken coop. (Aimee Dilger/SOPA Images/LightRocket via Getty Images)

SHAKER HEIGHTS, Ohio - Strange calls for service are not uncommon for fire departments, but one Ohio agency may have experienced one of the weirdest ones to date.

The Shaker Heights Fire Department in Ohio got an unusual call for service on Sept. 22 when first responders arrived at a home to find a man locked in a chicken coop, WJW-TV in Ohio reported last week.

It turns out the father was accidentally locked in the space by his 3-year-old son.

Michael Scalise, a former U.S. Army paratrooper, and medic with the 82nd Airborne told WJW-TV that he was helping to get eight hens back into the family’s chicken coop when he left keys in the door.

He went on to share with the news outlet that he saw his son Sam from outside the coop turn the keys in the lock to the door and removed them from the lock.

The father explained to the TV station that he tried to get his son to use the keys to open the door but it didn’t work.

After that plan didn’t work, Scalise told WJW-TV that he contacted the Shaker Heights Fire Department non-emergency number for help.

He told the fire department that he was locked in the chicken coop and his son was struggling to unlock the door, WJW-TV reported.

Scalise explained to the news outlet that he told his son to put the keys in his pocket until the fire rescue crews arrived, but his son told his dad that the keys fell out of his pocket and between two rocks, according to WJW-TV.

Fortunately, first responders arrived at the scene and found the keys, and they were able to get Scalise out of the coop.