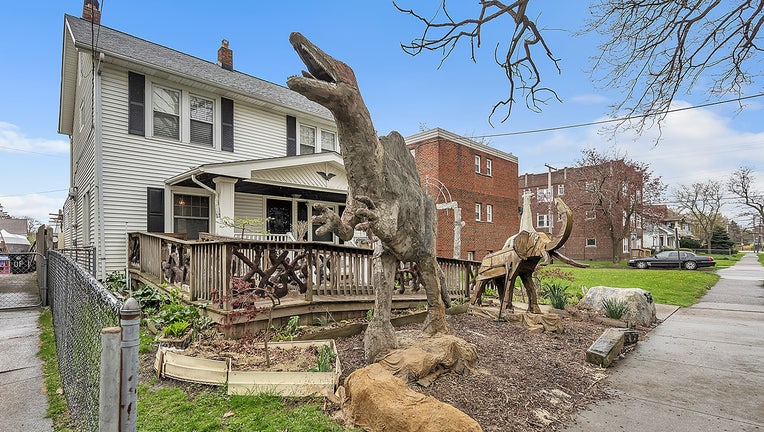 The house has been listed for $162,000 and features three bedrooms and three bathrooms. (Credit: Nicholas Reyes/Randee Pollarine from WindowStill)

CLEVELAND, Ohio - A home for sale in Cleveland is garnering national attention, with some even calling the property "dino-mite" and "rawr-some."

According to local news affiliate FOX8, Harry Larweh has been creating and displaying his art at his home for nearly a decade, with various sculptures sitting in his front yard.

"I have seen it in person and the artwork is truly unbelievable," Nicholas Reyes, the listing agent for the property, told FOX Television Stations Group. " Hearing the stories and time it has taken for Harry to complete some of the pieces is astounding." 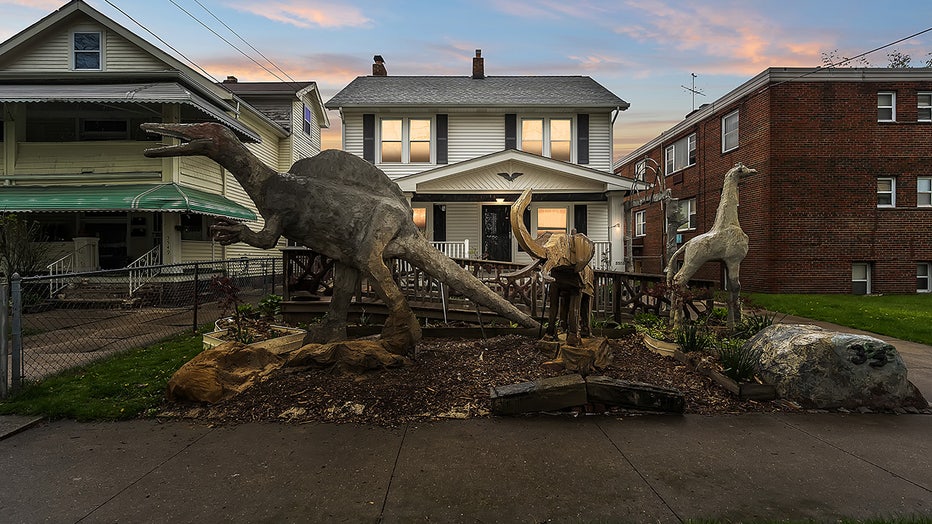 Now, Larweh has decided to sell his property and move to Ghana in West Africa.

"I need to take a break. There’s too much stress on me right now," Larweh told FOX8.

The photos of the home showcase a life-size dinosaur sculpture overtaking his front yard. Giant elephant and giraffe sculptures are also displayed outside. 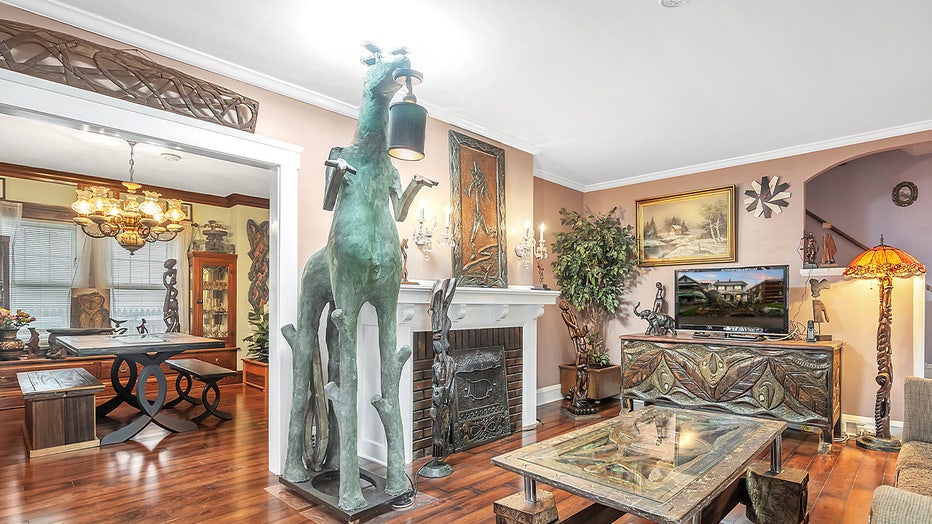 Owner Harry Larweh has been creating and displaying his art at his home for nearly a decade. (Credit: Nicholas Reyes/Randee Pollarine from WindowStill)

"I made the mistake of finishing it inside. And it was no fun bringing it out. And I learned a big lesson from that," Larweh told FOX8 of the giraffe sitting out front.

Photos of the property also show other art inside, including a large giraffe lamp.

Zillow Gone Wild is a popular page with 1.5 million followers on Instagram and more than 209,000 followers on Twitter. It highlights the weirdest and craziest homes spotted on Zillow.

According to Zillow, the house has been listed for $162,000 and features three bedrooms and three bathrooms.

Do you ever want to just get away? Well, maybe this house on a remote Florida island in the middle of a state park is the place for you. (Credit: McMurray and Members of Royal Shell Real Estate)

"Harry has also taken great care of the home itself; the floors, custom light fixtures, and pristine wood trim really show the home's character. High-end finishes in the kitchen and bathroom really put the home over the top," Reyes continued. "Cleveland will miss him dearly!"

Last month, one Wisconsin couple selling their home went beyond the cliche "Live, Laugh, Love" sign and hung a "Welcome to Poundtown" sign directly above their bed.

The family home in Onalaska, Wisconsin, is listed at $420,000 and has four bedrooms, three bathrooms, and is on 1.53 acres. The 3,600-square-foot home is filled with a variety of signs, including ones that read "the kitchen is made for dancing," "brush your teeth" and, above the toilet, "please seat yourself."

RELATED: House for sale goes viral thanks to bedroom sign

"I have a sense of humor this is 50% sarcasm and 50% raunchy and my husband is the exact same way," Lauren Hegenbarth told FOX News Digital.

This story was reported from Los Angeles. FOX News contributed.