Orlando FreeFall drop tower ride at ICON Park will be torn down after Tyre Sampson's death, the family responds to the news

ORLANDO, Fla. - The Orlando FreeFall drop tower ride at ICON Park will be torn down following the tragic death of 14-year-old Tyre Sampson, the attraction's operators announced on Thursday. Tyre fell out of the ride's restraints in while visiting Florida for Spring Break back in March.

"I’m like a little kid in a candy store. I don’t know really know what to do. I’m so filled with emotions, like finally respect. You know," said Tyre's father, Yarnell Sampson after finding out Orlando’s FreeFall ride will be coming down. "I’m just finally glad they’re coming to their senses and said you know what, let’s get rid of this thing. Let’s start over, come up with a better plan."

In a statement, CEO of Orlando Slingshot Ritchie Armstrong said the company decided to take down the 430-foot drop tower ride to respect Sampson's family's wishes, as well as public outcry over the boy's death.

"We have listened to the wishes of Tyre’s family and the community, and have made the decision to take down the FreeFall" - Orlando Slingshot CEO Ritchie Armstrong

"We are devastated by Tyre’s death. We have listened to the wishes of Tyre’s family and the community, and have made the decision to take down the FreeFall," Armstrong's statement read. "In addition, Orlando Slingshot will honor Tyre and his legacy in the classroom and on the football field by creating a scholarship in his name."

The timeline for taking down the FreeFall ride has not been determined yet.

"Tyre’s death is a tragedy that we will never forget. As the landlord, ICON Park welcomes and appreciates Orlando Slingshot’s decision to take down the ride," ICON Park said in a statement. While Orlando Slingshot owned the Orlando FreeFall ride, it was housed at ICON Park, an entertainment complex in Orlando.

Armstrong's company also owns Orlando Slingshot, a slingshot-style ride at ICON Park, and other attractions in the area.

Cellphone video shows the moments before a 14-year-old boy fell from an Orlando drop tower ride. Ride safety experts say his seat locked but was not pulled down far enough.

"I left it in God’s hands. It’s not a victory for me, it’s a victory for him because he used me as a vessel. "A vessel to keep other children safe and prevent a tragic death like Tyre’s. "Should no kid have to die trying to have fun period. Should no parent have to bury their child."

WHAT HAPPENED TO TYRE SAMPSON?

Sampson died on March 24 after plunging to his death while riding the Orlando FreeFall drop tower ride. Video of the incident was shared widely on social media.

The teen was visiting Orlando on spring break with another family from St. Louis, Missouri.

The ride – which was relatively new at the time – was billed as the world's tallest drop tower. It has been closed ever since Tyre's death.

An autopsy said Tyre was almost 100 pounds over the rides weight limit and a state investigation found ride operators made manual adjustments to seat him. The autopsy, which was conducted by the Orange County Medical Examiner, concluded that the boy's cause of death was the result of blunt force trauma and the manner of death was "accident."

"Tyre was too big to have been on the ride. There is no doubt about that," the family's attorney Ben Crump said. "The weight limit was 286 pounds, but they did not follow their own restrictions."

Those changes allowed the ride's restraint opening to be more than double what it was supposed to be, said Commissioner Nikki Fried during a press conference. It was also determined that the ride itself did not experience a mechanical or electrical failure, according to a report, though there were other contributing factors to Sampson's death. It did not elaborate on what those contributing factors were. 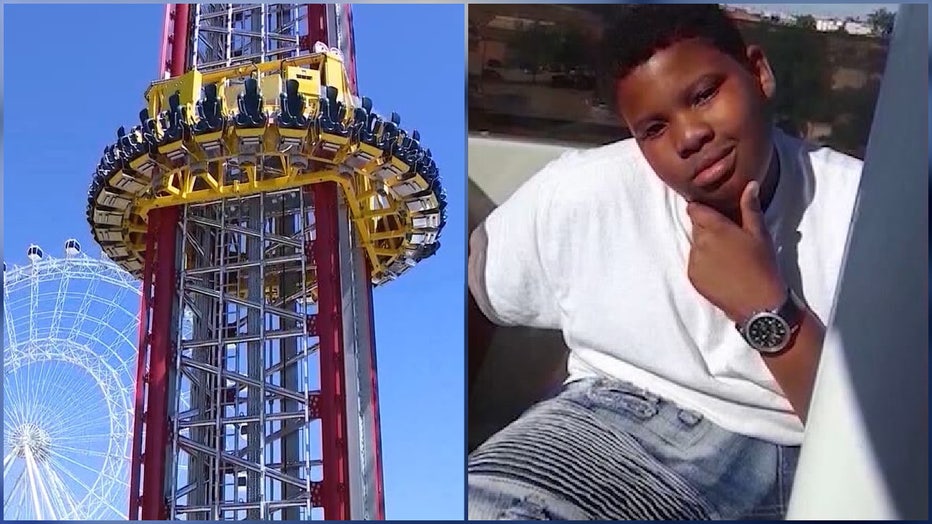 Following Tyre's death, the Slingshot Group suspended the operations of its two rides at ICON Park, including its Slingshot ride.

RELATED: How did 14-year-old Tyre Sampson fall from Orlando FreeFall?

In May, a petition was launched to turn the site into a memorial for Sampson, which garnered thousands of signatures.

Tyre Sampson would have turned 15 years old on Wednesday. His father and local leaders gathered outside the Orlando FreeFall ride at ICON Park where he fell to his death with balloons and a message.

Following his tragic death, the family of Tyre filed a wrongful death lawsuit. His mother, Nekia Dodd, says that everyone – the manufacturer, park operators, and ride operators – is equally at fault in her son's death.

In August, Tyre's family came together at ICON Park to celebrate his life on what would have been his 15th birthday.

Yarnell Sampson, along with Attorney Ben Crump, sang happy birthday and released balloons in the sky, while chanting, "take it down," before gathering to say a prayer.

During the news conference, State Rep. Geraldine Thompson told reporters she plans to file the 'Tyre Sampson Law' on the first day of the legislative session, which is currently scheduled for March 2023. She said it would be the very first bill she drafts as a member of the Florida Senate.