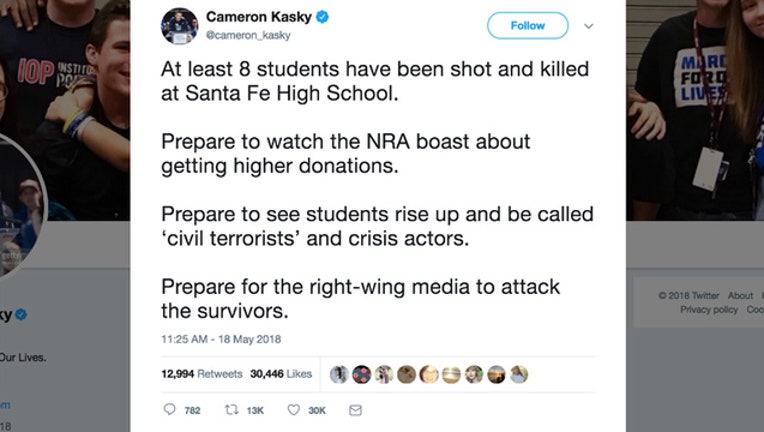 FORT LAUDERDALE, Fla. (AP) - Survivors of the school shooting in Parkland, Florida, took to social media to express outrage and heartbreak in the aftermath of the Friday school shooting in Texas, where authorities say a gunman opened fire, killing eight to 10 people.

"My heart is so heavy for the students of Santa Fe High School. It's an all too familiar feeling no one should have to experience. I am so sorry this epidemic touched your town - Parkland will stand with you now and forever," Marjory Stoneman Douglas students Jaclyn Corin said in a tweet.

She also directed her frustration at President Donald Trump, writing "Our children are being MURDERED and you're treating this like a game. This is the 22nd school shooting just this year. DO SOMETHING."

Classmate David Hogg, who was also part of a grassroots movement with Corin who started #NeverAgain and helped mobilize hundreds of thousands in for gun reform rallies across the world, warned that politicians would soon descend on the Texas school acting like they care but are only looking to boost approval ratings.

Cameron Kasky echoed those warnings on Twitter: "Prepare to watch the NRA boast about getting higher donations. Prepare to see students rise up and be called 'civil terrorists' and crisis actors. Prepare for the right-wing media to attack the survivors."

Most of those killed Friday when at least one gunman opened fire at a Houston-area high school Friday were students, authorities said. Harris County Sheriff Ed Gonzalez said he could not be precise about the number of deaths at Santa Fe High School, which went on lockdown around 8 a.m. One person was in custody, and a second person had been detained, he said.

Monday marked the three month anniversary since a former student allegedly opened fire on the Parkland, Florida, school in a Valentine's Day massacre that killed 17 people. The shooting fueled a massive student movement that led to gun reform legislation being passed in Florida and a national debate on stricter gun laws.