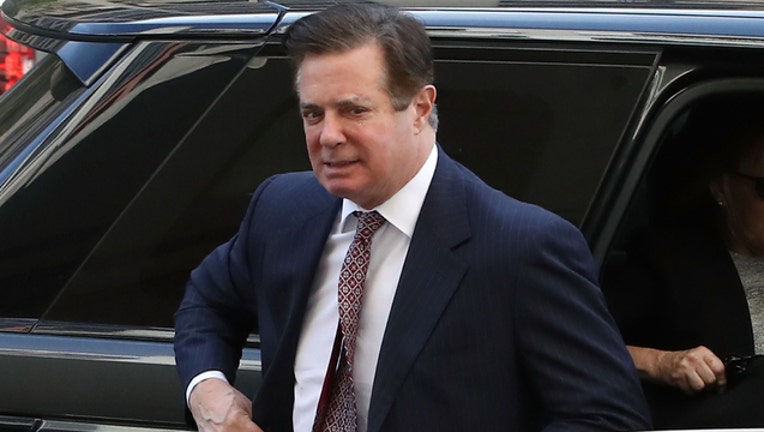 The order by U.S. District Judge Amy Berman Jackson adds to the already intense pressure on President Donald Trump's former top campaign aide in the special counsel's probe of Russian interference in the 2016 election campaign and the possible coordination with Trump aides.

Manafort, who is 69, now loses the relative freedom he enjoyed while preparing for two criminal trials, and he faces the possibility, if tried and convicted, of spending the rest of his life in prison. Still, it's unclear if the move will push Manafort to cooperate with prosecutors.

Manafort witnessed several key episodes under investigation by Mueller's team. But he has not shown a willingness to help investigators, instead vigorously maintaining his innocence and attacking his prosecution as illegitimate. Prosecutors have also given no indication they are pursuing a plea deal or consider his testimony essential to the probe given the amount of evidence — and other cooperators — they've amassed in the last year.

No one on the campaign, including Manafort, has been charged with a crime directly related to Russian attempts to sway the election.

On Friday, Trump criticized Jackson's decision, even as he sought to distance himself from Manafort by saying the former chairman worked for other prominent Republicans and worked for his campaign for only "49 days or something? A very short period of time." In fact, Manafort served there for nearly five months.

Trump also tweeted with sarcasm that he "didn't know Manafort was the head of the Mob" and asked: "What about Comey and Crooked Hillary and all of the others? Very unfair!" The president referred incorrectly to Manafort's pre-trial detention as a "tough sentence." Manafort hasn't been convicted of any crimes or sentenced.

In issuing her ruling, Jackson said she had struggled with the decision to jail Manafort while he awaits trial and considered alternatives.

But she couldn't "turn a blind eye" to his conduct or ensure he would abide by her orders if he remained on house arrest.

"You have abused the trust placed in you six months ago," she said.

Jackson's ruling came in response to an indictment handed up last week charging Manafort, and longtime associate Konstantin Kilimnik, with obstruction of justice and conspiracy to obstruct justice, adding to the multiple felony counts he already faced.

Manafort pleaded not guilty to the latest indictment on Friday. Kilimnik, who prosecutors say lives in Russia, did not appear in court or respond to an email seeking comment Friday. Mueller's team has said that Kilimnik has ties to Russian intelligence agencies, a claim he has denied.

Prosecutors say the two men tried to get two witnesses to say that lobbying work on behalf of Ukraine and carried out by clandestinely paid former politicians occurred only in Europe and not the U.S., a contention the witnesses said they knew was false.

The distinction matters because unregistered foreign lobbying in the U.S. is a crime, while lobbying solely in Europe would be outside the special counsel's jurisdiction.

Manafort's attorneys have accused prosecutors of conjuring a "sinister plot" out of "innocuous" contacts. They filed a memo written by one of the witnesses for Manafort that his attorneys say shows the work of the group, known as the Hapsburg group, was European-focused.

In response, prosecutors filed additional documents showing extensive lobbying contacts by the group in the U.S., which they said showed "the falsity of his representation." One document was a 2013 memo from Manafort to former Ukrainian President Viktor Yanukovych. It described how Manafort had designed a program that used the Hapsburg members to lobby U.S. lawmakers and influence American public opinion including meetings on Capitol Hill.

On Friday, Manafort lawyer Richard Westling said his client had "largely" complied with Jackson's orders. And he argued that Manafort could not have known the men he contacted were witnesses.

Westling did not propose adding any conditions to Manafort's house arrest, only asking that the judge clarify whom he was or wasn't allowed to contact. He also asked the judge to consider the burden it would place on Manafort to prepare for two criminal trials from jail.

Prosecutor Greg Andres said it was "inconceivable" that Manafort didn't know the men were potential witnesses, noting that he had specifically reached out to them to discuss allegations made in an indictment against him.

Andres said Manafort had carried out a "sustained campaign" over five weeks to influence the witnesses' testimony, which he said was part of Manafort's "history of deception in this case."

For example, he said, the government had discovered Manafort was trying to hide his communications by using a technique called "foldering" in which multiple people have access to the same email account and communicate by saving messages in a drafts folder rather than sending them.

Jackson said she was "very troubled" by Manafort's contacts with witnesses. She also refused to lay out which witnesses were off-limits.

"This is not middle school. I can't take his cellphone," she said, noting that if she listed 56 witnesses, she couldn't be certain he wouldn't contact the 57th.

Manafort will remain in jail while he awaits trial in both Washington and Virginia over the next few months. He faces several felony charges — including tax evasion, bank fraud, money-laundering conspiracy and acting as an unregistered foreign agent — related to his Ukrainian political work, money he funneled through offshore accounts and loans he took out on property in the U.S.