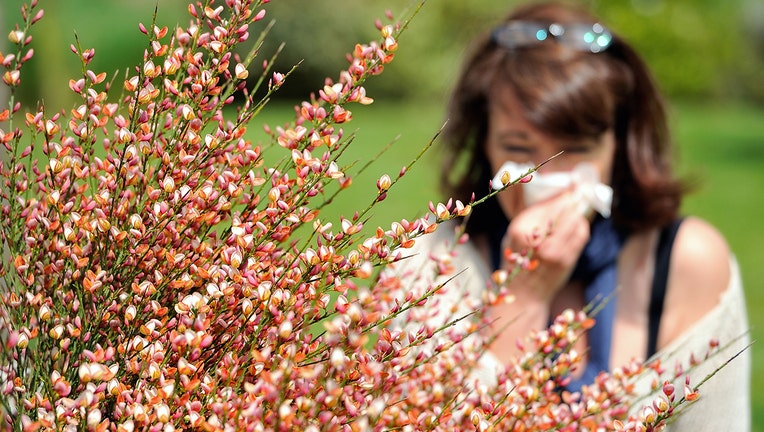 A woman blows her nose in Godewaersvelde, northern France on May 18, 2013, as the return of pleasant weather marks the arrival of allergenic pollen. AFP PHOTO / PHILIPPE HUGUEN (Photo by Philippe HUGUEN / AFP) (Photo by PHILIPPE HUGUEN/AFP via Getty

WASHINGTON - A new study finds that people with food allergies may be less likely to become infected with COVID-19 than people without them.

According to the study, funded by the National Institutes of Health and published Tuesday in the "Journal of Allergy and Clinical Immunology," biweekly nasal swabs and weekly surveys were conducted for six months with more than 4,100 participants from nearly 1,400 households.

The goal was to identify coronavirus infections between May 2020 and February 2021 — prior to the widespread rollout of COVID-19 vaccines among non-healthcare workers in the United States and before the widespread emergence of variants of concern.

If a member of the household developed symptoms consistent with COVID-19, additional nasal swabs were taken. Blood samples also were collected periodically and after a family’s first reported illness, if there was one.

Researchers found that self-reported doctor-diagnosed asthma was not a risk factor for infection, nor was upper respiratory allergies or eczema. In addition, food allergies were associated with a lower infection risk.

The study, also known as the Human Epidemiology and Response to SARS-CoV-2 (HEROS) study, also found that children 12 years old or younger are just as likely to become infected with the virus as teenagers and adults, but 75% of infections in children are asymptomatic. The study also confirmed that COVID-19 transmission in households with children is high.

RELATED: Allergy sufferers, you might be cleaning your house all wrong

"The HEROS study findings underscore the importance of vaccinating children and implementing other public health measures to prevent them from becoming infected with SARS-CoV-2, thus protecting both children and vulnerable members of their household from the virus," said Anthony S. Fauci, director of the National Institute of Allergy and Infectious Diseases (NIAID), part of NIH. "Furthermore, the observed association between food allergy and the risk of infection with SARS-CoV-2, as well as between body-mass index and this risk, merit further investigation."

Tina V. Hartert, who co-led the research, speculates that type 2 inflammation, a characteristic of allergic conditions, may reduce levels of a protein called the ACE2 receptor on the surface of airway cells.

"SARS-CoV-2 uses this receptor to enter cells, so its scarcity could limit the virus’s ability to infect them. Differences in risk behaviors among people with food allergy, such as eating out at restaurants less often, also could explain the lower infection risk for this group," the NIH wrote in its press release.

Previous research has identified obesity and a high body mass index as risk factors for COVID-19. In the HEROS study, investigators found a strong, linear relationship between BMI and the risk of SARS-CoV-2 infection.

This study was reported from Los Angeles.