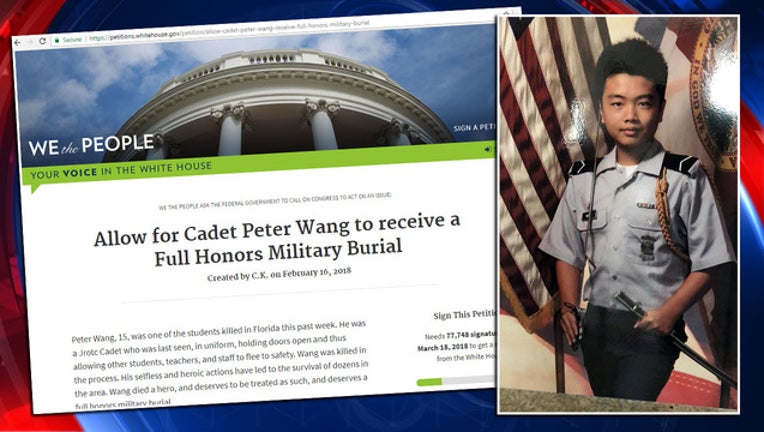 FORT LAUDERDALE (FOX 13) - The Parkland community wants to make sure one of the heroes -- a 15-year-old -- gets the honor he deserves.

Peter Wang stayed behind and held the door open so that his fellow Marjory Stoneman Douglas High School classmates could escape from the gunman.  He died holding that door, wearing his Junior ROTC uniform.

His goal was to one day go to West Point.

Lin Chen, Wang’s cousin, told the Sun-Sentinel that she was not surprised to learn of his actions.

“He is so brave. He is the person who is genuinely kind to everyone,” she told the newspaper. “He doesn’t care about popularity. He always liked to cheer people up. He is like the big brother everyone wished they had.”

Now, his community is asking the government to give a full-honors military funeral to Wang for his bravery.  An online petition started on Friday urges Congress to honor him with a burial fit for a military hero.

“His selfless and heroic actions have led to the survival of dozens in the area,” the petition states.  “Wang died a hero, and deserves to be treated as such, and deserves a full honors military burial.

Information from FOX News was used in this report.