A bizarre police chase turned into a standoff with officers just as dramatic in Los Angeles County Friday night.

SkyFOX was first over the chase scene on the 10 Freeway as the California Highway Patrol is in pursuit of a possible stolen SUV. The suspect drove through parts of East LA, South Gate and San Gabriel Valley. At one point during the chase, officers tried to do a PIT maneuver against the Dodge Durango, but the suspect got away in the South Gate area.

A driver wanted in a wild hour-long police chase slams on the gas pedal, sending smoke all across a southwest San Gabriel Valley neighborhood.

The driver of a stolen vehicle is leading officers on a police chase on the 10 Freeway in the San Gabriel Valley.

A little before 6:15 p.m., the suspect SUV's tire blew out and flew off the car. Yet, the suspect hopped on the 710 Freeway, extending the bizarre pursuit.

The driver of a stolen vehicle kept driving after the front tire of the car popped out. 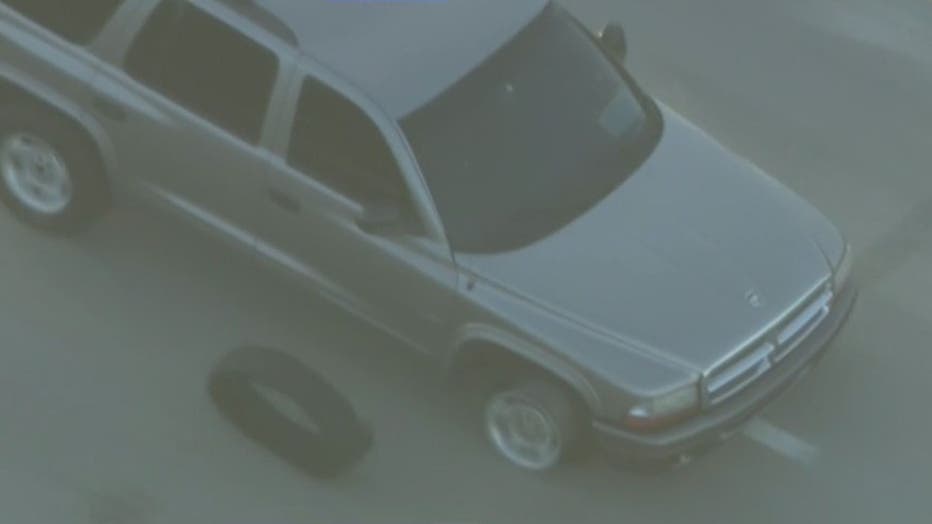 The chase eventually ended in a residential neighborhood in the southwest part of the San Gabriel Valley. The suspect refused to get out of the SUV so a standoff ensued.

During the standoff, the suspect started slamming the gas pedal, sending smoke all across the residential area.

Around 6:45 p.m., CHP officers appeared they had enough. The officers forced open the driver's side of the SUV and dragged the suspect out of the car and then placed him in custody.