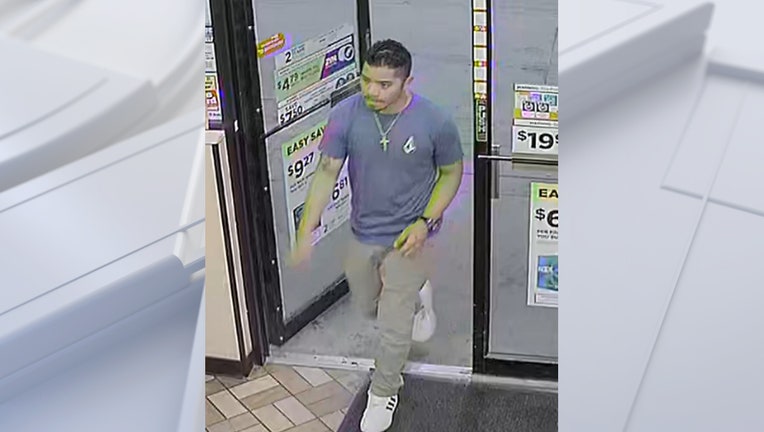 Police in Aurora, CO, released this image of a suspect believed to have tried to set victims on fire. (Credit: Aurora Police Dept)

AURORA, Colo. - Police in Aurora, Colorado, are looking for a man believed to have doused a group of people with gasoline and then tried to set them on fire in a possible hate crime.

Authorities say on July 23 around 11 p.m. local time, a man confronted other customers at the Rocket Gas Station located on 1100 S. Havana Street.

The customers were speaking Spanish, according to police. "He told them they don't belong here and followed them to their car," police posted on Facebook.

Authorities said the man sprayed the victims with gasoline and then looked for a lighter to set them on fire. He then threw a rock through the back window and stole their keys.

"Detectives are investigating this as a bias-motivated crime and need your help to identify the suspect," police added. "He is about 20-25 y/o, 5'06" to 5'09" and described as Hispanic or Asian."

Police have released photos of the suspect and his suspected car.

There were nearly 1,000 more hate crimes committed in 2020 and over 2,800 more victims compared to 2019, with 63% of last year’s hate crime offenses related to race, ethnicity or ancestry biases, according to the latest statistics released by the FBI in 2021.

RELATED: FBI says hate crimes are on the rise, but numbers may not tell the whole story

In 2020, there were 8,263 hate crime offenses with the majority having links to racial biases or those related to a victim’s ethnicity or ancestral background.

FBI statistics also showed 6,929 offenders were behind the hate crime attacks in 2020. Fifty-five percent of the offenders were White, while 21% were Black or African American, the FBI found.

FOX News contributed to this report. This story was reported from Los Angeles.