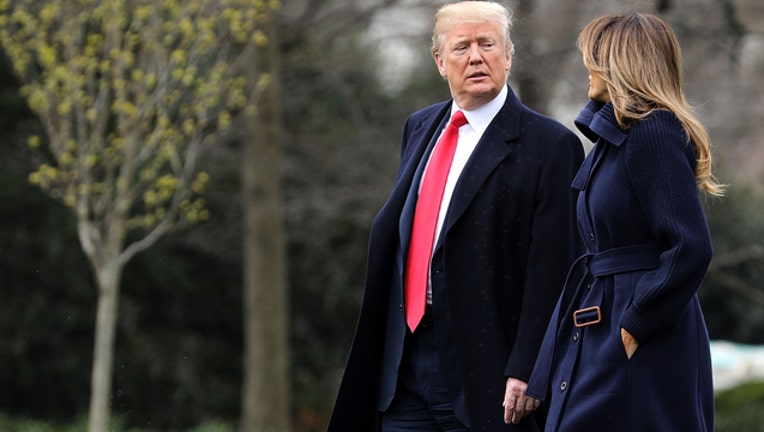 MANCHESTER, N.H. - (AP) — President Donald Trump's plan to combat opioid drug addiction calls for stiffer penalties for drug traffickers, including the death penalty where appropriate under current law, a top administration official said. It's a fate for drug dealers that Trump has been highlighting publicly in recent weeks.

Trump also wants Congress to pass legislation reducing the amount of drugs needed to trigger mandatory minimum sentences for traffickers who knowingly distribute certain illicit opioids, said Andrew Bremberg, Trump's domestic policy director, who briefed reporters Sunday on the plan Trump is scheduled to unveil Monday in New Hampshire, a state hard-hit by the crisis and that he once referred to as "drug infested."

The president will be joined by first lady Melania Trump, who has shown an interest in the issue as it pertains to children.

Trump drew criticism last year after leaked transcripts of his telephone conversation with Mexico's president showed he had described New Hampshire as a "drug-infested den." The Washington Post published the transcripts.

Death for drug traffickers and mandatory minimum penalties for distributing certain opioids are just two elements under the part of Trump's plan that deals with law enforcement and interdiction to break the international and domestic flow of drugs into and across the U.S.

Other parts of the plan include broadening education and awareness, and expanding access to proven treatment and recovery efforts.

Trump has mused openly in recent weeks about subjecting drug dealers to the "ultimate penalty."

The president told the audience at a Pennsylvania campaign rally this month that countries like Singapore have fewer issues with drug addiction because they harshly punish their dealers. He argued that a person in the U.S. can get the death penalty or life in prison for shooting one person, but that a drug dealer who potentially kills thousands can spend little or no time in jail.

"The only way to solve the drug problem is through toughness," Trump said in Moon Township.

He made similar comments at a recent White House summit on opioids. "Some countries have a very, very tough penalty — the ultimate penalty. And, by the way, they have much less of a drug problem than we do," Trump said. "So we're going to have to be very strong on penalties."

White House officials referred questions about the death penalty and drug traffickers to the Justice Department, which said the federal death penalty is available for several limited drug-related offenses, including violations of the "drug kingpin" provisions in federal law.

Doug Berman, a law professor at Ohio State University, said it was not clear that death sentences for drug dealers, even for those whose product causes multiple deaths, would be constitutional. Berman said the issue would be litigated extensively and would have to be definitively decided by the U.S. Supreme Court.

Opioids, including prescription opioids, heroin and synthetic drugs such as fentanyl, killed more than 42,000 people in the U.S. in 2016, more than any year on record, according to the Centers for Disease Control and Prevention. Trump has declared that fighting the epidemic is a priority for the administration but critics say the effort has fallen short.

Last October, Trump declared the crisis a national public health emergency, short of the national state of emergency sought by a presidential commission he put together to study the issue.

Trump will also discuss how his plans for a U.S.-Mexico border wall and punishing "sanctuary" cities that refuse to cooperate with federal immigration authorities will help combat the opioid crisis, Conway told reporters traveling with the president.

Other elements of the plan Trump call for a nationwide public awareness campaign, which Trump announced last October, and increased research and development through public-private partnerships between the federal National Institutes of Health and pharmaceutical companies.

Bremberg said the administration also has a plan to cut the number of filled opioid prescriptions by one-third within three years.

The stop in New Hampshire will be Trump's first as president. He won the state's 2016 Republican presidential primary but narrowly lost in the general election to Hillary Clinton. It follows a visit to the state last week by retiring Sen. Jeff Flake, R-Ariz., a persistent Trump critic. Flake told New Hampshire Republicans that someone needs to stop Trump — and it could be him if no one else steps up.