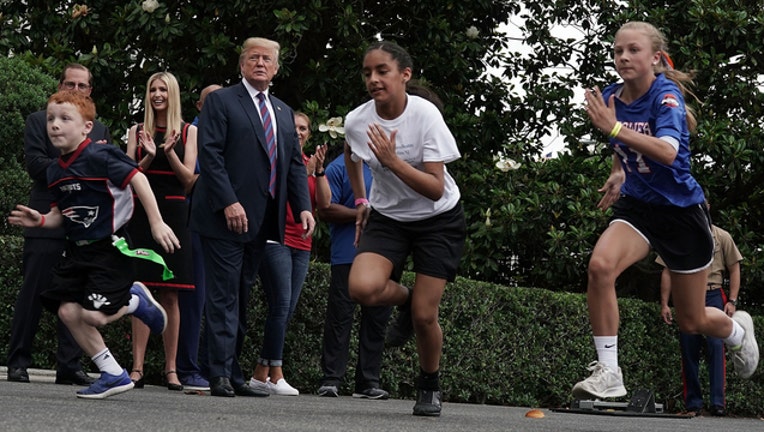 President Donald Trump and Ivanka Trump watch children participating in a run during a White House Sports and Fitness Day at the South Lawn of the White House May 30, 2018 in Washington, DC. (Photo by Alex Wong/Getty Images)

WASHINGTON - (AP) — President Donald Trump joined a group of renowned athletes for a field day with kids at the White House on Wednesday as he kicked off an effort to increase youth participation in sports.

"Work hard, get in the game, play to win and most of all, have a good time," the president told the youngsters.

His administration wants to reverse a trend of declining participating in athletic activity and to make youth sports more accessible to economically disadvantaged students.

After addressing participants, Trump joined athletes at stations that included flag football, baseball, volleyball, golf, soccer and track and field. He asked kids to name their favorite players and posed for photos.

Trump issued an executive order in February refocusing the council on youth sports as opposed to President Barack Obama's emphasis on fitness and healthy eating. Trump, who played high school sports and is a competitive golfer, has tried to work with public and private groups to address declining participation in youth sports.

Ivanka Trump, the president's daughter and senior adviser, told reporters in a conference call before the event that sports participation lags disproportionately among young girls and children who live in economically distressed areas. Many high schools have "pay to play" policies requiring students to pay a fee to join a school sports team, making it difficult for families to afford after-school sports.

"We must break down barriers to youth sports participation and empower each child to reach his or her full potential through sport and play," Ivanka Trump said. She said that by the time girls reach age 14, they drop out of athletics at two times the rate of boys.

The council was established in 1956 by President Dwight Eisenhower to promote youth fitness and sports. Each president has often placed his own stamp on the council and its priorities.

During Obama's presidency, first lady Michelle Obama launched the sports council in 2010 in conjunction with her "Let's Move!" initiative and took part in hula-hooping and jumping rope as ways to fight childhood obesity.

Trump's administration plans to create a national strategy to promote youth participation in sports and set the stage for a series of events that will culminate around the 2020 Summer Olympics.

Trump has bragged about his athletic abilities, telling The Wall Street Journal in a January interview: "I was always the best athlete. People don't know that." Trump once owned the USFL's New Jersey Generals, led by Heisman Trophy-winner Walker, and he frequently plays golf with members of Congress and world leaders.

White House doctor said earlier this year that Trump acknowledged he'd be healthier if he lost a few pounds by exercising more and eating better. Dr. Ronny Jackson, who has since left that post, told reporters that he would arrange for a dietitian to consult with the White House chef to cut calories and recommend a low-impact, aerobic exercise program for Trump with the aim of shedding 10 pounds to 15 pounds this year.