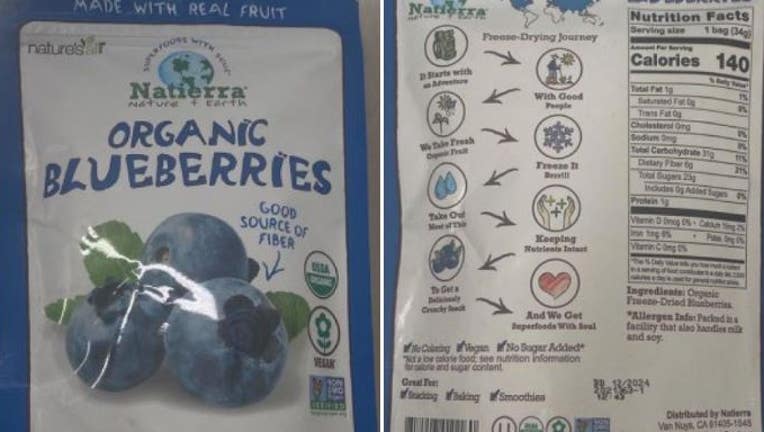 The impacted Organic Freeze-Dried Blueberry pouches are pictured in provided images. BrandStorm Inc. issued the voluntary recall for two lots of product "because of the presence or potential presence of lead above the FDA's recommended limits; per th

Blueberries are being recalled due to potentially elevated levels of lead, according to a notice posted by the U.S. Food and Drug Administration (FDA).

BrandStorm Inc. issued a voluntary recall this week for two lots of its Natierra Organic Freeze-Dried Blueberry pouches "because of the presence or potential presence of lead above the FDA's recommended limits; per the serving size specified on the nutritional facts panel," according to the recall.

The affected blueberries were distributed in 1.2-ounce packages through retail and online stores in the U.S. with "Best By" dates of December 2024 and January 2025.

Lead is toxic to everyone but young children are especially at risk, according to the CDC.

According to the recall, a packing site began an investigation following a test by a lab in Maryland.

"The original heavy metal reports received for the crop year showed no presence of lead and-or cause for batch testing," the recall notice. "After further investigation it was found that the products county of origin is Lithuania and aggressive monitoring of heavy metals may be deemed necessary. As an immediate action the packing site is actively working to enhance food safety system by implementing mandatory batch testing for heavy metal."

Lead is "a toxic substance present in our environment in small amounts and everyone is exposed to some lead from daily actions such as inhaling dust, eating food, or drinking water," according to the recall.

However, exposure to larger amounts can cause lead poisoning.

"While lead can affect nearly every bodily system, its effects depend upon the amount of, and duration of lead exposure and age of the person exposed," according to the recall.

To date, the company has not received any reports of illnesses related to the recalled blueberries.

"First and foremost, we remain focused on the health and welfare of our employees, customers, and partners," the company said in a statement. "We are committed to taking the appropriate steps to ensure our network and services continue to operate seamlessly for our customers."

People that have high levels of lead in their blood may not show any symptoms "but the condition may cause damage to the nervous system and internal organs," according to the recall posted by the FDA.

Children, in particular, are "vulnerable to lead poisoning," according to the recall.

If they are exposed "to enough lead for a protracted period of time" they could be at risk for "permanent damage to the central nervous system," according to the notice.