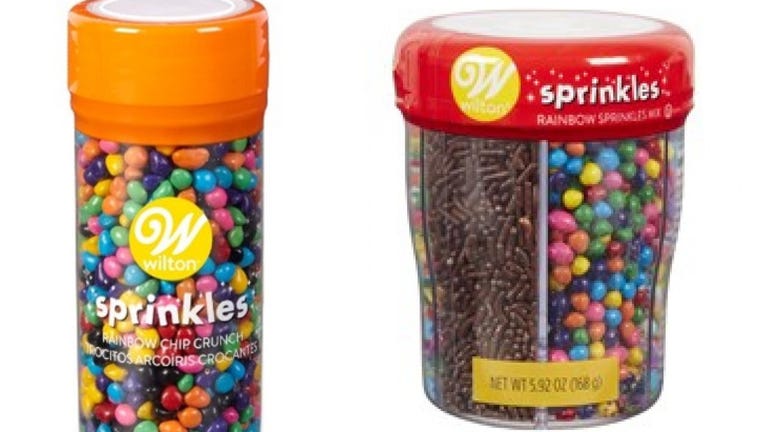 NAPERVILLE, Ill. - Certain dessert sprinkles have been recalled because the products may contain milk without clear labeling, company officials said.

The impacted products, Rainbow Chip Crunch Sprinkles And Rainbow Sprinkles Mix, were made by Wilton Industries Inc., of Naperville, Illinois, and distributed to retail stores across the U.S.

"Although the product label does indicate that it may contain milk, this recall is being conducted because some samples of the product were found to contain milk," an announcement from the company reads, dated June 2.

"People who have an allergy or severe sensitivity to milk run the risk of serious or life-threatening allergic reaction if they consume these products," the statement adds.

The recall is specific to certain lot codes, which can be found on the bottom of the container:

RAINBOW SPRINKLES MIX (710-0-0627) is distributed nationally through retail stores and e-commerce including www.wilton.com in the U.S. This voluntary recall impacts lots 21005Z and 21111Z.

Customers who purchased these products can return them where they were purchased for a full refund, the company said. It added that the impacted sprinkles were being removed from shelves at stores nationwide.

What is salmonella infection?

People with salmonella infection often suffer diarrhea, fever, and stomach cramps after getting in contact with infected animals, their feces, or their environment or eating contaminated food or drinking contaminated water.

Meanwhile, a recall of Jif peanut butter products sold in the U.S. due to potential salmonella contamination was also making headlines. Officials last month announced a multistate outbreak of salmonella infections linked to certain products. The CDC said 14 illnesses had been reported across a dozen states, with two people needing hospitalization.

The J.M. Smucker Co. warned Tuesday that the company stands to lose $125 million because of its nationwide recall, citing the "impact of manufacturing downtime, customer returns, and unsaleable inventory, as well as other recall-related costs" for the fiscal year 2023.