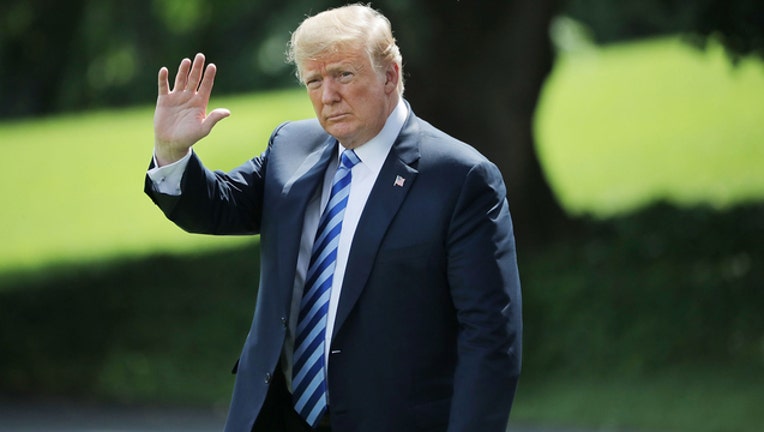 President Donald Trump waves to journalists as he walks across the South Lawn before boarding Marine One and departing the White House June 1, 2018 in Washington, DC. Trump is traveling to Camp David. (Photo by Chip Somodevilla/Getty Images)

WASHINGTON - President Donald Trump's lawyers composed a secret 20-page letter to special counsel Robert Mueller to assert that he cannot be forced to testify while arguing that he could not have committed obstruction because he has absolute authority over all federal investigations.

The existence of the letter, which was first reported and posted by The New York Times on Saturday, was a bold assertion of presidential power and another front on which Trump's lawyers have argued that the president can't be subpoenaed in the special counsel's ongoing investigation into Russian meddling in the 2016 election.

The letter is dated January 29 and addressed to Mueller from John Dowd, one of Trump's lawyers at the time who has since resigned from the legal team. In the letter, the Trump's lawyers argue that a charge of illegal obstruction is moot because the Constitution empowers the president to, "if he wished, terminate the inquiry, or even exercise his power to pardon."

Trump weighed in on Saturday on Twitter, asking "Is the Special Counsel/Justice Department leaking my lawyers letters to the Fake News Media?" He added: "When will this very expensive Witch Hunt Hoax ever end? So bad for our Country."

Mueller has requested an interview with the president to determine whether he had criminal intent to obstruct the investigation into his associates' possible links to Russia's election interference. Trump had previously signaled that he would be willing to sit for an interview, but his legal team, including head lawyer Rudy Giuliani, have privately and publicly expressed concern that the president could risk charges of perjury.

If Trump does not consent to an interview, Mueller will have to decide whether to forge forward with a historic grand jury subpoena. His team raised the possibility in March of subpoenaing the president but it is not clear if it is still under active consideration. Giuliani has told The Associated Press that the president's legal team believes the special counsel does not have the authority to do so.

Topics of Mueller's obstruction investigation include the firings of both Comey and former National Security Adviser Michael Flynn, as well Trump's reaction to Attorney General Jeff Sessions' recusal from the Russia investigation.

In addition to the legal battles, Trump's team and allies have waged a public relations campaign against Mueller to discredit the investigation and soften the impact of the special counsel's potential findings. Giuliani said last week that the special counsel probe may be an "entirely illegitimate investigation" and need to be curtailed because, in his estimation, it was based on inappropriately obtained information from an informant and former FBI director James Comey's memos.

In reality, the FBI began a counterintelligence investigation in July 2016 to determine if Trump campaign associates were coordinating with Russia to tip the election. The investigation was opened after the hacking of Democratic emails that intelligence officials later formally attributed to Russia.

Giuliani has said a decision will not be made about a possible presidential interview with the special counsel until after Trump's summit with North Korean leader Kim Jong Un on June 12 in Singapore.