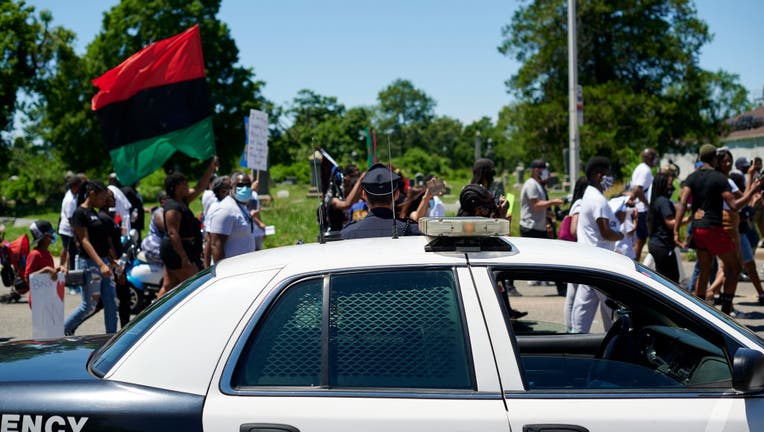 Police officers of the Camden County Police Department keep an eye out as demonstrators take part in a Black Lives Matter protest march in Camden, NJ on June 13, 2020. Organized by Black Men Rising the event drew hundreds from nearby communities from

CAMDEN, N.J. (AP) — To Scott Thomson, changing the culture of policing in America is a relatively simple process.

It’s just not an easy one.

Thomson led a tumultuous police department makeover in Camden, New Jersey — a poor city of mostly brown and black residents just across the river from Philadelphia — in 2013.

After state officials disbanded the old department and started anew, Thomson transformed policing in Camden from the law-and-order, lock-‘em-up approach of the 1990s to a holistic, do-no-harm philosophy that’s put the long-maligned city in the spotlight during the national reckoning over race and police brutality.

While police elsewhere clashed with Black Lives Matter protesters outraged by the latest death of a black man detained by police, Camden officers marched calmly with residents and activists.

“Our actions can accelerate situations. What we should be trying to do is de-escalate them,” said Thomson, a past president of the Police Executive Research Forum who retired from the Camden job last year. “The last thing we want is for the temperature to rise, and for situations to go from bad to worse because of our failed tactics.”

But if the recent protest was peaceful, the county takeover of the Camden Police Department was cataclysmic. More than 300 officers lost their jobs. Only half joined the new force.

Along with the switch to community policing came a reliance on high-tech, city-wide surveillance, more patrols, and younger, cheaper, less diverse officers who often aren’t from Camden. Their average age today is 26.

“That is a very different vision of what a new police force looks like than we’re hearing from protesters, who want less policing,” said Stephen Danley, a professor of public policy at Rutgers University-Camden.

Ashly Estevez-Perez, 21, has spent most of her life in Camden, which is now about half Hispanic and 40 percent black. She remembers when children were rarely allowed to leave their front stoops given the threat of gunfire.

“The new police force came in, and you saw cars everywhere. ... Everyone was kind of taken aback,” she said of what some would call “over-policing."

"Growing up in the city, I don’t see what other alternative works,” said Estevez-Perez, a recent Rutgers-Camden graduate.

Activist and entrepreneur Sean Brown, 37, who is black, said the surveillance solves the wrong problem.

“If we had economic justice in our community, where anybody who needed a job could get a job, we would be in a different space,” said Brown, who is raising two young sons in the city.

Once a busy manufacturing town, Camden in the past few years has added enviable luster to its commercial corridor as generous state tax breaks lured Subaru, American Water, and the Philadelphia 76ers (who built a practice facility) to town.

They join earlier development that transformed Camden's downtown and southern waterfront, including a concert venue. The estimated $3 billion in development attracts suburbanites and employs some Camden residents. But locals debate just how many.

“I don't know one person who works in any 76er job, any Holtec (International) job, any Subaru job,” said teachers' union president Keith Eric Benson. ”Neighborhoods have looked really similar today as they did 10 years ago."

The police changeover followed state budget cuts that had forced Camden to slash municipal services in 2011. Nearly half of its 360 officers were laid off. Crime surged.

Thomson remained at the helm.

Over time, his philosophy evolved from a “broken window” approach that famously saw the department cite people for failing to have bicycle horns to a friendlier approach that sends officers into the community to host barbecues, hand out ice cream and shoot hoops.

“I think we’re received a lot better than we used to be,” said Sgt. Dekel Levy, 41, as he helped distribute diapers to a steady stream of young mothers Thursday afternoon at Guadalupe Family Services in North Camden.

The neighborhood, long one of the city's poorest and most dangerous, shows signs of progress. The state prison that dominated the nearby waterfront has been replaced with a park. Aging schools have been spruced up.

Crime rates have fallen — whether due to the police engagement, the increased investment, the booming Philadelphia economy or the national decline in violent crime.

“There is no doubt that Camden is safer than it was in the austerity era. There’s a lot of doubt about whether that’s directly due to the new police force,” Danley said.

As Estevez-Perez marched in Camden's Black Lives Matter protest May 30, Police Chief Joe Wysocki helped carry the banner at the front of the pack.

“I just felt I had to do it. George Floyd’s death was very difficult to watch, and it was horrifying what he went through,” Wysocki, who is white, told The Associated Press on Thursday. “I think every cop that watched that — every good cop — had a knot in their stomach.”

Across the bridge, Philadelphia police in riot gear that day clashed with protesters as police cruisers were set on fire and storefronts vandalized.

“It’s a huge sigh of relief that the city of Camden was not devastated over the past couple of weeks,” said Sister Helen Cole, a Roman Catholic nun who runs Guadalupe Family Services.

Cole, the daughter of a Philadelphia police officer, has seen tensions erupt and the city set ablaze during nearly 30 years in Camden.

Today, she cheers officers who work with troubled teens and department figures that show a sharp drop in excessive force complaints — in the wake of a strict use of force policy — from 65 in 2014 to three last year.

“It’s not like officers are the enemy anymore,” Cole said.

Still, Brown, the activist and entrepreneur, laments that too few Camden residents make it onto the new force, which is 54 percent minority. Wysocki concurred, saying state civil service rules thwart his efforts. He hopes a recent salary boost, to $51,000 annually after training, will help with retention.

“The same political will that went to dismantling and rebuilding the police department has to go into these other issues — job development and housing, as well,” Brown said. “The momentum has to continue for us to get where we need to go.”