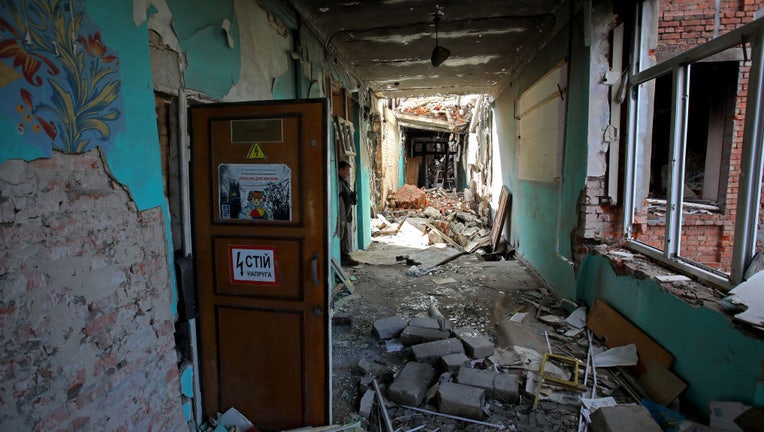 A corridor is pictured inside a school destroyed as a result of shelling by Russian troops in Izium which was liberated from Russian invaders, Kharkiv Region. (Vyacheslav Madiyevskyy/ Ukrinform/Future Publishing via Getty Images)

IZIUM, Ukraine - The Russian occupation radio and newspaper ads promoted the camps as a summer break from the war for Ukrainian children under their control, free of charge. Hundreds of families agreed in the occupied east and the south, Ukrainian officials and parents say.

One bus convoy left Izium at the end of August, with the promise that the children would return home in time for the school year. Instead, Ukrainian forces swept though in early September, driving the Russians into a disorganized retreat and liberating territory that had been in enemy hands for months.

Fifty-two children from Izium and around 250 more from other towns in the Kharkiv region, all between the ages of 9 and 16, are now scattered in camps, according to a Ukrainian intelligence official and a mother who hitchhiked into Russia to retrieve her daughter. Both, like nearly everyone involved in the issue, spoke on condition of anonymity to describe a sensitive and fraught situation.

"Our main goal was to give the children a break from everything that was happening here, from all the horrors that were here," said Valeriya Kolesnyk, an Izium teacher whose 9-year-old is now in Russia. "The problem is that the Russian side does not plan to return the children to us."

That doesn’t seem to have been the initial expectation.

Kolesnyk said she had sent her elder daughter to a camp in July and the girl returned home with no complications. The shifting front lines changed everything.

About two dozen parents gathered Wednesday outside a closed café in Izium overlooking one of the town’s countless bombed out buildings. Desperate, angry and almost crazed with worry, they say they need more help to retrieve their kids.

They are afraid they are seen as collaborators, willing participants in handing their children over to the enemy.

"We are simple people. We could never afford a seaside holiday for our children and we saw this as a chance," said one Izium father who has a 9-year-old child among the group.

No town official was present at Wednesday’s gathering.

The Washington Post first reported on the stranded children last week, but AP was able to learn the magnitude of the issue after speaking with 20 parents and officials in both Russia and Ukraine.

RELATED: Officials: 98,000 Russians cross into Kazakhstan to avoid call-up to fight in Ukraine

Families of the missing children said the Izium couple who organized the trip now tell them Ukraine is too dangerous for children. The couple are planning a permanent future in Russia.

"I’m not going back," said the husband, Valeriy Polyvoda, reached by phone in Russia. Polyvoda blamed the children’s plight on local authorities in Russia. He refused to say how many children were with him.

One mother managed to hitchhike to Zaporizhzhia, got permission from Ukrainian authorities to cross into Russian-controlled territories, hitchhiked her way to Crimea and across to Russia all the way to Gelendzhik, the seaside resort town where many of the children remain to this day.

There she found her daughter, but camp authorities refused to give her permission to take her daughter away. They told her: "We will not allow you to take your child to Ukraine."

She signed a document promising to stay in Russia, picked up the girl and managed to get both of them out the same way she came, through the occupied territories, the war zone and back to Ukraine.

Russian soldiers spoke harshly at the checkpoints, but let them through, said the woman.

"We will burn your country to ash," the woman said the Russians told her. But she managed to get herself and her teenage daughter back to Izium. Her daughter told her 300 children from territories recently reclaimed by Ukraine remained behind.

The local Kuban 24 news site, citing the regional governor Venyamin Kondratyev, said a total of 323 children were at the two sites.

The families who gathered Wednesday wrote out a list of their names and contact information. But phone service has been down for six months in Izium and communications are hit-or-miss. Most families speak periodically to their children using some of the satellite internet hotspots that the Ukrainian government has set up, but it’s difficult for the younger ones, said the father of the 9-year-old.

As far as they can tell, the children are basically fine, their needs provided for. They are following the Russian school curriculum. They have food, clothes, shelter.

But they are without their families.

Jason Straziuso a spokesman for the International Committee of the Red Cross, encouraged the families to register their children as missing.

"Reuniting families is as important of a humanitarian goal as providing food or shelter or water. It is about reconnecting people with their loved ones, and in situations of armed conflicts family reunification is a right under international law," he said.

The southern Kherson region, near the annexed Crimean Peninsula, has cases as well, according to Mykhailo Podoliak, a presidential adviser. He did not know how many but said the government is trying to resolve the situation.

A Ukrainian official, speaking on condition of anonymity to discuss the sensitive topic, said it’s complicated to open a criminal case because the parents agreed to let the children leave, including signing paperwork relinquishing legal authority to make decisions for them.

Either the children need to cross back through the front lines, which are shifting every day, or they need to travel north and exit Russia via the Baltics, going thousands of kilometers (miles) and crossing multiple international borders to get home.

Margaryta Tkachenko, the mother of three young children, was among those in Izium who refused an offer she said sounded too good to be true. She rejected the Russian soldiers who came to her roofless home to press the issue.

"They will be able to rest. The conditions are good," the soldiers told her. "They’ll go away and then they’ll return."
Her answer was still no.

A few days later more soldiers came and threatened to take the entire family to Belgorad, a Russian city near the border. They said Izium wasn’t safe for small children.

"What right do you have?" Tkachenko demanded. "These are my children, not yours."