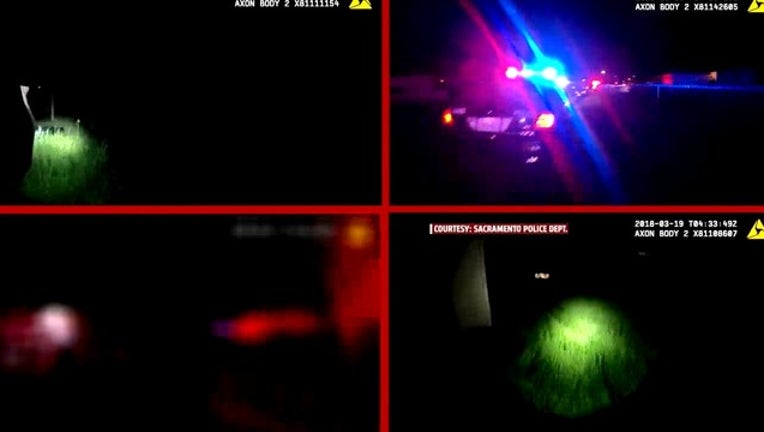 The March shooting of Stephon Clark, 22, sparked an outcry in California's capital city and became the latest flashpoint in a national conversation about police shootings of young black men.

The police were responding to calls of someone breaking car windows. They said they thought Clark had a gun, but he was unarmed.

WATCH: Release of 53 videos related to the fatal shooting of Stephon Clark

The new clips show several officers muting their microphones when they begin speaking with others and two officers administering CPR on Clark's motionless body more than five minutes after the shooting. They include dashboard and body camera footage from officers arriving after the shooting, audio from two 911 calls and more video from a Sacramento County Sheriff's Department helicopter.

One of the newly released 911 calls appears to come from Clark's grandfather. Earlier released video footage showed Clark jumping over a fence into his grandparents' side yard then being chased by police into the backyard, where he was shot.

The male caller tells the dispatcher that someone is in his backyard "beating on my window and I don't know what's going on." He says he can't get out of bed to see, and a woman in the background says he has "no legs."

Clark's grandfather, Tommy Thompson, has lost his legs to complications from diabetes, according to Clark's uncle, Curtis Gordon. Family members said it was typical for relatives to knock on the rear window so Thompson could use a remote garage door opener to let them into the house.

The dispatcher advises the man to stay inside until he is contacted by police. The police confirmed Monday that the call came from within the Thompson's home.

Clark's grandmother, Sequita Thompson, earlier said she was watching a video of a granddaughter dancing when she heard booms. She said she crawled to where her granddaughter was sleeping on the couch, pulled her to the floor, then crawled to her husband and told him to call 911. She said the family believes in hindsight that Clark had been asking to be let into the house.

Another clip shows two responding officers performing CPR on Clark after handcuffing him.

"Come on buddy, wake up, breathe for me," one says, before a medic arrives and says "he's gone."

A spokesman who assisted Clark's family with the funeral, Adam Keigwin, was not able to immediately provide comment from the family on the new materials including the 911 call. Clark's brother, Stevante Clark, did not answer his cellphone and the voice mailbox was full.