Police Chief William McManus said a city worker at the scene was alerted to the situation by a cry for help shortly before 6 p.m. Monday.

SAN ANTONIO (AP) - Victims have been found with no identification documents at all and in one case a stolen ID. Remote villages lack phone service to reach family members and determine the whereabouts of missing migrants. Fingerprint data has to be shared and matched by different governments.

More than a day after the discovery of a stifling trailer in San Antonio where dozens of migrants died after being abandoned in the sweltering heat, few identities of the victims have been made public, illustrating the challenges authorities face in tracing people who cross borders clandestinely.

The number of dead rose to 53 on Wednesday after two more migrants died, according to the Bexar County Medical Examiner’s Office. Forty of the victims were male and 13 were female, it said.

Officials had potential identifications on 37 of the victims as of Wednesday morning, pending verification with authorities in other countries.

The bodies were discovered Monday afternoon on the outskirts of San Antonio in what is believed to be the nation's deadliest smuggling episode on the U.S.-Mexico border. More than a dozen people were taken to hospitals, including four children. Three people have been arrested.

The truck, which was registered in Alamo, Texas, but had fake plates and logos, was carrying 67 migrants, Francisco Garduño, chief of Mexico’s National Immigration Institute, said Wednesday.

The driver was apprehended after trying to pretend he was one of the migrants, Garduño said. Two other Mexican men also have been detained, he said.

Among the dead were 27 people from Mexico, 14 from Honduras, seven from Guatemala and two from El Salvador, he said. One of the victims had no identification, Garduño said. 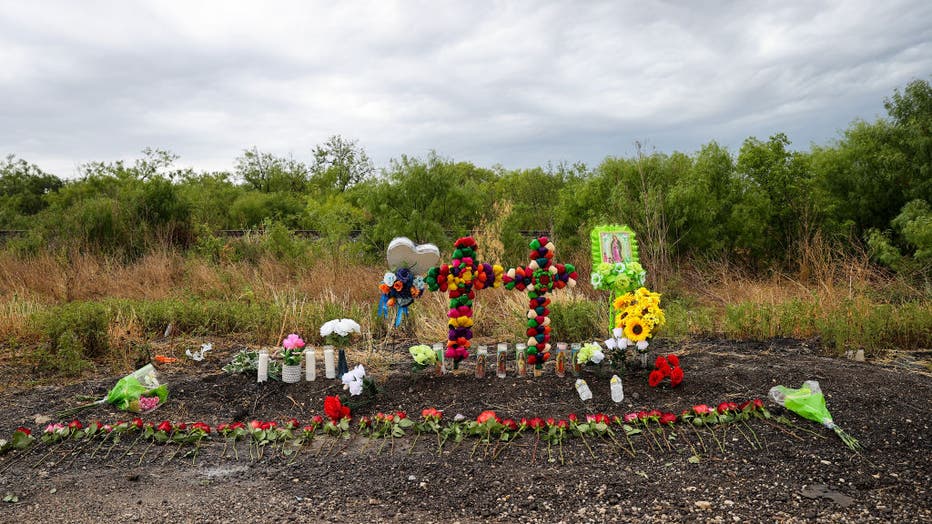 Flowers and candles are placed the area where an abounded truck was found with 46 dead migrants and several more died after hospitalized in San Antonio, Texas, United States on June 28, 2022. (Photo by Tayfun Coskun/Anadolu Agency via Getty Images)

The tragedy occurred at a time when huge numbers of migrants have been coming to the U.S., many of them taking perilous risks to cross swift rivers and canals and scorching desert landscapes. Migrants were stopped nearly 240,000 times in May, up by one-third from a year ago.

With little information about the victims, desperate families of migrants from Mexico and Central America frantically sought word of their loved ones.

Several survivors were in critical condition with injuries such as brain damage and internal bleeding, according to Rubén Minutti, the Mexico consul general in San Antonio.

RELATED: A global look at suffocation deaths of trafficked migrants

Guatemala’s foreign ministry said late Tuesday that it had confirmed two hospitalized Guatemalans and was working to identify three possible Guatemalans among the dead. Honduras’ foreign relations ministry said it was trying to confirm the identities of four of the dead who were carrying Honduran papers.

Eva Ferrufino, a spokesperson for Honduras’ foreign ministry, said her agency was working with the Honduras Consulate in south Texas to match names and fingerprints and complete identifications.

The process is painstaking because among the pitfalls are fake or stolen documents.

Mexico’s foreign affairs secretary identified two people Tuesday who were hospitalized in San Antonio. But it turned out that one of the identification cards he shared on Twitter had been stolen last year in the southern state of Chiapas.

Haneydi Antonio Guzman, 23, was safe in a mountain community more than 1,300 miles (2,092 kilometers) away from San Antonio when she began receiving messages from family and friends. There is no phone signal there, but she has internet access.

Journalists started showing up at her parents’ home in Escuintla -- the address on her ID that was stolen and found in the truck — expecting to find her worried relatives.

"That’s me on the ID, but I am not the person that was in the trailer and they say is hospitalized," Antonio Guzman said.

"My relatives were contacting me worried, asking where I was," she said. "I told them I was fine, that I was in my house and I clarified it on my" Facebook page.

Foreign Affairs Secretary Marcelo Ebrard deleted his tweet identifying her without comment. The other victim Ebrard identified turned out to be accurate.

In the southern Mexican state of Oaxaca, municipal officials in San Miguel Huautla were traveling to the community of 32-year-old José Luis Vásquez Guzmán late Tuesday to find out if his mother wanted to travel to San Antonio to be with him in the hospital.

Manuel Velasco López, San Miguel Huautla’s municipal secretary, said that a cousin had been traveling with Vásquez Guzmán and was now considered missing.

Another cousin, Alejandro López, told Mexico's Milenio television that their family worked in farming and construction and that they migrated because "we don’t have anything but weaving hats, palms and handicrafts."

"Growing corn, wheat and beans is what we do in this region and that leads to a lot of our people emigrating and going to the United States," he said.

Miguel Barbosa, the governor of neighboring Puebla state, set off a scramble for information in the town of Izucar de Matamoros on Tuesday when he said two of the dead were from there although that was not confirmed.

In the heavily migrant town, everyone was asking if their friends or neighbors were among the dead found in Texas. Attempting to cross into the United States is such a tradition that most youths in the town at least consider it.

"All of the young people start to think about going (to the U.S.) as soon as they turn 18," said migrant activist Carmelo Castañeda, who works with the nonprofit Casa del Migrante. "If there aren’t more visas, our people are going to keep dying."

Migrants typically pay $8,000 to $10,000 to be taken across the border and loaded into a tractor-trailer and driven to San Antonio, where they transfer to smaller vehicles for their final destinations across the United States, said Craig Larrabee, acting special agent in charge of Homeland Security Investigations in San Antonio.

U.S. Rep. Henry Cuellar told The Associated Press Wednesday that Homeland Security investigators believe the migrants boarded the truck in or around Laredo, on U.S. soil, but have not confirmed that. He said the truck went through a Border Patrol checkpoint northeast of Laredo on Interstate 35 on Monday.

Before leaving on the more than two-hour trip to San Antonio, the truck had been parked Monday in South Texas just north of the border, Garduño said.

Authorities think the truck had mechanical problems when it was left next to a railroad track in an area of San Antonio surrounded by auto scrapyards that brush up against a busy freeway, said Bexar County Judge Nelson Wolff.

San Antonio has been a recurring scene of tragedy and desperation in recent years involving migrants in semitrailers.

Ten migrants died in 2017 after being trapped inside a truck parked at a San Antonio Walmart. In 2003, the bodies of 19 migrants were found in a sweltering truck southeast of the city.

Other tragedies have occurred before migrants reached the U.S. In December, more than 50 died when a semitrailer rolled over on a highway in southern Mexico.

During a vigil Tuesday at a San Antonio park, many of the more than 50 people who attended expressed sadness and anger at the deaths and what they described as a broken immigration system.

Back in Puebla, farmer Juan Sánchez Carrillo, 45, was sickened when he heard of the deaths in Texas.

He narrowly escaped death when he and his friends ran away from dozing migrant rustlers in the mountains near Otay Mesa near San Diego.

"For the smugglers, we the migrants are not human," Sánchez Carrillo said. "For them we are no more than merchandise."