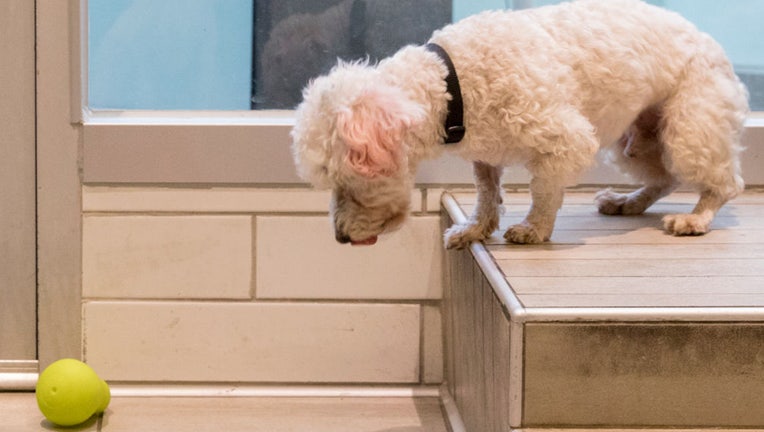 FILE - A dog stares down a chew toy while in her room at the San Francisco SPCA Adoption Center in San Francisco, Calif. Thursday, July 18, 2019. (Jessica Christian/San Francisco Chronicle via Getty Images)

A recent study out of Budapest, Hungary, found that dogs interchange their senses to recognize and remember familiar objects such as a favorite toy, whether it’s through smell, sight or even associating a word with a corresponding object.

It was also hypothesized that some gifted dogs are able to visualize their favorite toys before even seeing them, giving scientists a further glimpse into the minds of man’s best friend.

Apart from being able to recognize a toy or object by smell and sight alone, some particularly gifted dogs are able to hear the word associated with their favorite toy and can start imagining it in their minds before going to retrieve it, researchers from Eötvös Loránd (ELTE) University, hypothesized.

Researchers tested three dogs that were specifically trained and "gifted word learner" dogs and tested another 10 typical family dogs, according to the study.

The family dogs, however, "were motivated to retrieve toys but did not have knowledge of object names or experience in scent detection," according to the study authors.

The family dogs consisted of five border collies, one pinscher, one Labradoodle mix, one mutt, one Australian shepherd, and one border terrier and the three gifted dogs were all border collies that have been used in previous studies at the university.

All of the dogs were trained to retrieve a specific toy during experimentation, according to the study.

Unsurprisingly, all of the dogs were able to retrieve said toy more efficiently and quickly in a well-lit room as opposed to a dark one.

"Dogs have a good sense of smell, but we found that dogs preferred to rely on vision and used their noses only a few times, and almost only when the lights were off," Prof. Adam Miklósi, head of the Department of Ethology at ELTE University and co-author of the study, said. "Dogs sniffed more often and for longer in the dark. They spent 90% more time sniffing when the lights were off, but this was still only 20% of the searching time."

Scientists hypothesized that dogs have a multi-modal mental image of their familiar objects, meaning they are able to go back and forth between different senses to recognize and remember something such as a favorite toy.

In a second experiment, using only the gifted dogs, scientists found that the dogs were able to find and retrieve a specific toy after hearing the word associated with it.

When dogs were told which toy to retrieve, scientists hypothesized these gifted dogs were able to start visualizing the toy in their minds before being commanded to get it from a separate room.

"Revealing the senses used by the dogs to search for the named toys gave us the possibility to infer what these dogs imagine when they hear, for example, 'teddy bear,'" Dr. Claudia Fugazza, co-author of the study, explained.