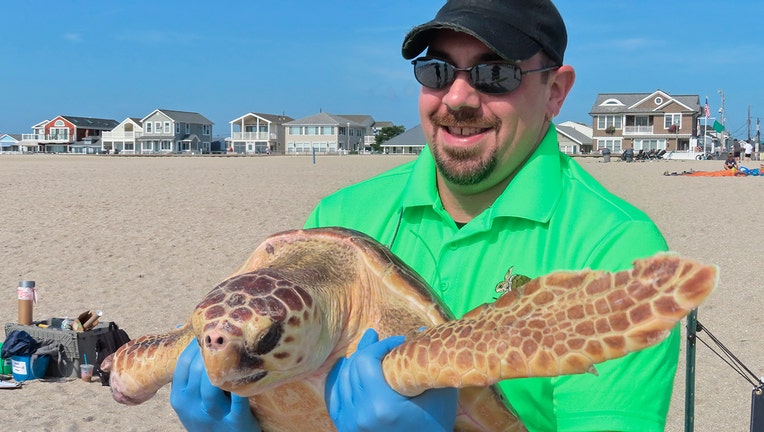 POINT PLEASANT BEACH, N.J. (AP) - If what doesn't kill you truly makes you stronger, then Titan is the strongest turtle in the ocean.

The juvenile loggerhead turtle has been gashed by a boat propeller, had part of his front flipper bitten off by a shark, and was being attacked by a different shark when two New Jersey fishermen intervened, saved him and called Sea Turtle Recovery, a group that rescues and rehabilitates turtles before returning them to the ocean in Point Pleasant Beach.

Tuesday morning, Titan was among eight turtles returned to the sea after being nursed back to health over the winter and spring.

"To see Titan go back into the ocean after being hit by a boat, bitten by a shark and fighting off another shark is just amazing," said Brandi Biehl, co-executive officer of the group. "There truly is no tougher turtle in the world than him."

Based in the aptly named Turtle Back Zoo in South Orange, New Jersey, the group began taking in and treating sick or injured turtles in Dec. 2016. Including Tuesday's releases, they have now healed and returned 85 turtles to the ocean.

"To see Titan go back into the ocean after being hit by a boat, bitten by a shark and fighting off another shark is just amazing. There truly is no tougher turtle in the world than him."

Most of the turtles fell victim to what is called "cold stunning," the near-shutdown of their organs due to lingering in waters that become too cold for them instead of migrating to warmer waters in the winter. November and December are particularly busy months for the group.

Others were injured by boats or sharks, or developed other illnesses. Six of the eight are Kemp's Ridley turtles, an endangered species. Titan and another turtle, Petunia, are loggerheads.

One of the rescued turtles, Princess, was found stranded on the beach in Sandy Hook just after Thanksgiving, barely alive. A sea turtle's body temperature should be above 65 degrees; hers was 37 when she was found. 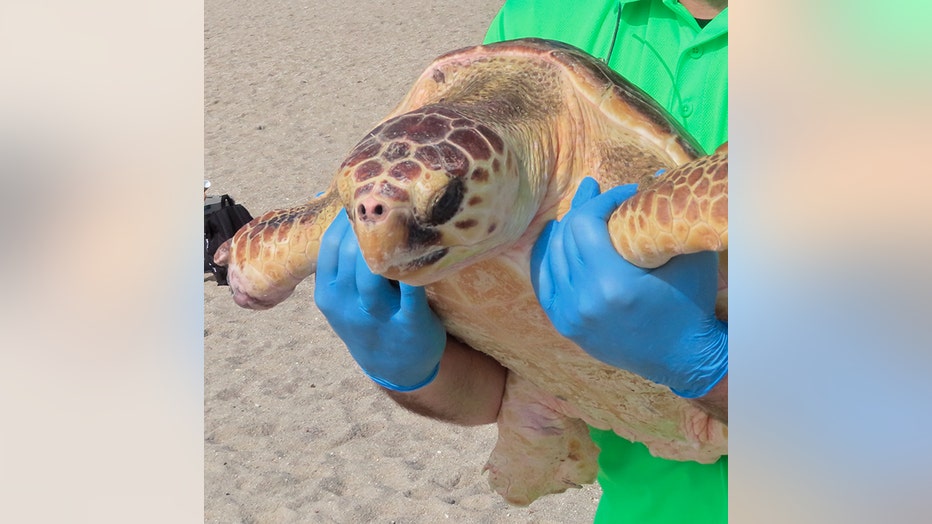 Other rescuees include Donashello, who stranded in Dec. 2020 after large lung lesions caused him to float, and he failed to migrate south before the water became too cold. He was in critical condition for months, but eventually recovered.

Willow also was cold stunned and emaciated when she foundered on the shore. She refused food for over a month, but eventually resumed eating and recovered.

Slater was found on the beach at Sandy Hook with a front flipper that had to be amputated after being mangled by a boat propeller. But he is expected to do fine in the ocean with just three flippers, as others in his condition have been studied and found to do well despite their limitations, the group said.

Petunia stranded with eye damage that has since healed. She is one of a few turtles outfitted with a radio tracking device that will be used to monitor her movements in the ocean.

Cortez stranded in critical condition last December and also had a torn ligament in his front flipper that has since healed.

Sea Turtle Recovery still has four turtles remaining in its northern New Jersey recovery facility that are not yet ready to be returned to the sea.