WASHINGTON - Online searches around the topic of vasectomies have skyrocketed following the leak of a draft opinion that would overturn Roe v. Wade and sharply curtail abortion rights in many U.S. states.

In fact, daily searches for vasectomies have increased 99% since the leaked draft opinion was published early last week, according to an analysis of Google Trends and search volume data shared by Innerbody Research, a home health product research firm.

"Roe was egregiously wrong from the start," the draft opinion states, which was signed by Justice Samuel Alito, a member of the court’s 6-3 conservative majority.

While abortion remains legal in all 50 states, such a decision would lead to automatic abortion bans or severely restrict access to abortions in roughly half the states.

An investigation is underway to determine who leaked the draft, and the opinion could change before the ruling is finalized in the coming weeks.

Still, news of the potential ruling appears to have heightened the interest in vasectomies. Searches for "how much is a vasectomy" also jumped by 250%, the research company said, noting how most major health insurance companies typically cover the procedure.

It listed Michigan, Kentucky, Indiana, Ohio and Florida as the states where searches for "vasectomy near me" were most popular.

The data also showed a 250% increase in searches asking if vasectomies are reversible.

"With searches relating to this procedure continuing to rise daily, we likely will start hearing more about males taking the leap to protect themselves and their partners from unwanted pregnancies," Innerbody Research Co-Founder Eric Rodriguez said in a statement. 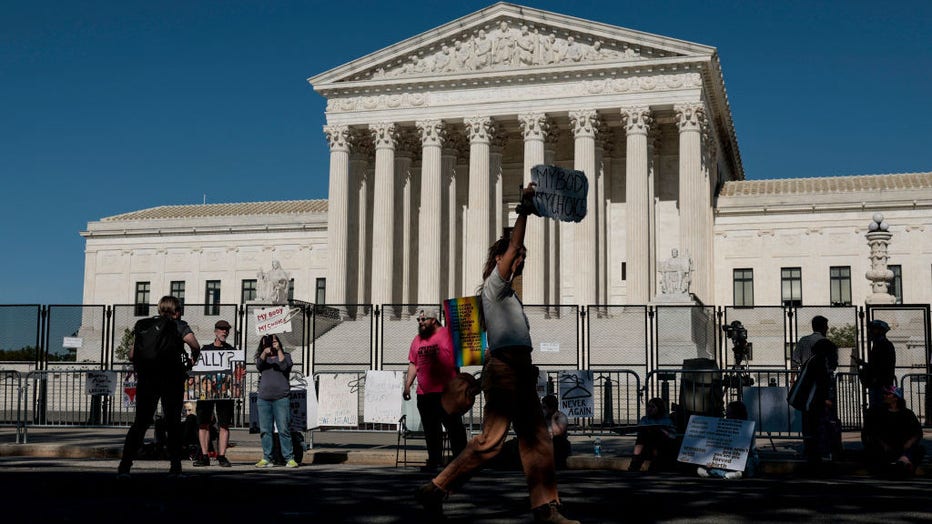 FILE IMAGE - Abortion-rights demonstrators stand in front of the U.S. Supreme Court Building on May 9, 2022, in Washington, D.C. (Photo by Anna Moneymaker/Getty Images)

What is a vasectomy?

A vasectomy is a permanent form of male birth control that men can receive if they decide they don’t want to father any more children. The surgical procedure stops sperm from leaving the body by closing off the ends of the vas deferens, which are the tubes that carry sperm.

More than 500,000 men elect to have vasectomies each year in the U.S., according to the Cleveland Clinic.

The failure rate of a vasectomy "is very low," the Cleveland Clinic states, noting how semen samples are routinely checked after surgery to confirm a successful procedure.

The procedure can be outpatient and most people can resume everyday activities within 48 to 72 hours "unless the activities are unusually vigorous," the clinic states. Most report a full recovery in an average of just over a week.

Some risks of a vasectomy can include residual pain, swelling, bleeding or infection, which are relatively uncommon, the clinic says.

Vasectomies are reversible, but the procedure may be more expensive and isn’t usually covered by insurance, according to the Cleveland Clinic.

A vasectomy reversal, called a vasovasostomy, involves a small incision in the scrotum to allow the surgeon to find the vas deferens and identify the site of the vasectomy.

Men seeking a vasectomy reversal do so for various reasons, according to the clinic. Some may be in a new relationship and wish to have children with a new partner, while others may want children after making an initial decision not to have a family.

"You should consider vasectomy a permanent means of birth control," the Cleveland Clinic says. "If you’re married or in a serious relationship, you should talk about vasectomy with your partner. If you’re thinking about a reversal now, you might need more time to decide if a vasectomy is right for you."