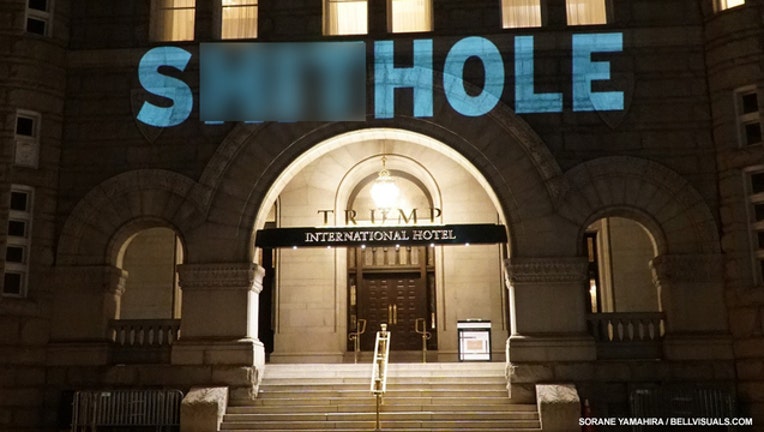 An artist projected the word "s***hole" onto the front of the Trump International Hotel in Washington D.C. on Saturday, Jan. 13, 2018.

WASHINGTON - A D.C. artist's video has gone viral, after projecting the word "s***hole" on the front of the Trump International Hotel in Washington, D.C. Saturday.

This comes after President Donald Trump received criticism this past week, after reports circulated that he allegedly referred to immigrants from Haiti and "s***hole countries" in Africa when speaking on immigration reform during an Oval Office conversation.

Multimedia artist Robin Bell, of Bell Visuals, projected the phrase, appearing with "poop" emojis and then live-streamed it on social media.

Bell's video has received hundreds of comments, with over 13,000 retweets.

The AP reports the White House did not deny his remark but issued a statement saying Trump supports immigration policies that welcome "those who can contribute to our society."

On Twitter, the President denied making derogatory remarks and said he has a "wonderful relationship with Haitians."

Bell has done similar work in the past, projecting various phrases critical of the Trump Administration on the front of the hotel owned by the Trump family.

On September 24, 2017, Bell posted a video of "Trump is a bomb threat" projected on the hotel.

Bell has also done projection work at the Environmental Protection Agency, after Scott Pruitt was named the head of the EPA, with "#PollutingPruitt" on the building. Prior to his appointment, Pruitt was a lawyer from Oklahoma, known for his criticism of climate change policy.