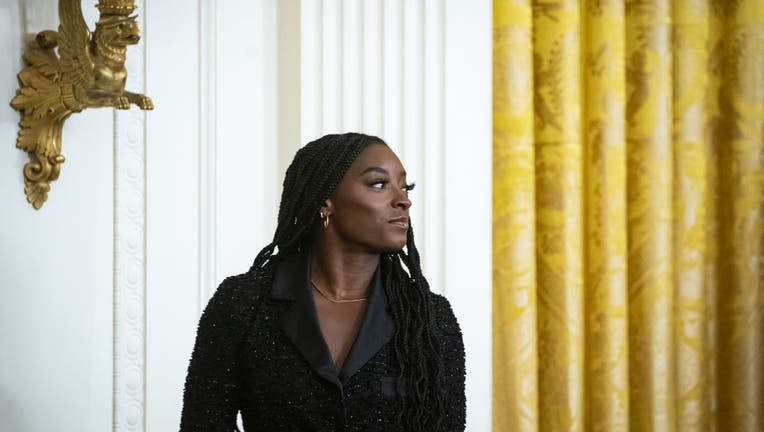 Simone Biles, Olympic gymnast, during a Presidential Medal of Freedom ceremony with US President Joe Biden, not pictured, in the East Room of the White House in Washington, D.C., US, on Thursday, July 7, 2022. (Photographer: Al Drago/Bloomberg via Ge

NEW YORK - A flight attendant apparently mistook seven-time Olympic medalist Simone Biles for a child and offered her a coloring book on a recent flight.

"Not the flight attendant trying to give me a coloring book when I board….. I said ‘no I’m good I’m 25,'" wrote Biles in the caption which was shared on Twitter.

Biles, who stands at 4-foot-8 inches, made a face in disbelief.

The illustrious athlete was possibly on a departure flight from her visit to the White House Thursday where she received the Presidential Medal of Freedom.

"Today, she adds to her medal count," said President Joe Biden as he introduced Biles.

The former foster child won 32 Olympic and World Championship medals making her the most decorated U.S. gymnast in history.

Local heroes among recipients of Presidential Medal of Freedom

President Joe Biden awarded the Presidential Medal of Freedom to 17 new recipients on Thursday, including some local heroes from the NYC area.

"I don't know how you're going to find room," for another medal, Biden joked. The 25-year-old is an advocate for athletes' mental health, foster care children and sexual assault victims. She's also the youngest person to ever receive the medal," said Biden.

After the coloring book incident, another flight attendant offered Biles an alcoholic drink.

"The other flight attendant gave me a mimosa so we’re in the clear," she wrote.

Northwell Health critical care nurse Sandra Lindsay was awarded the Presidential Medal of Freedom on Thursday for becoming the first American not in a clinical trial to receive the COVID-19 vaccine.