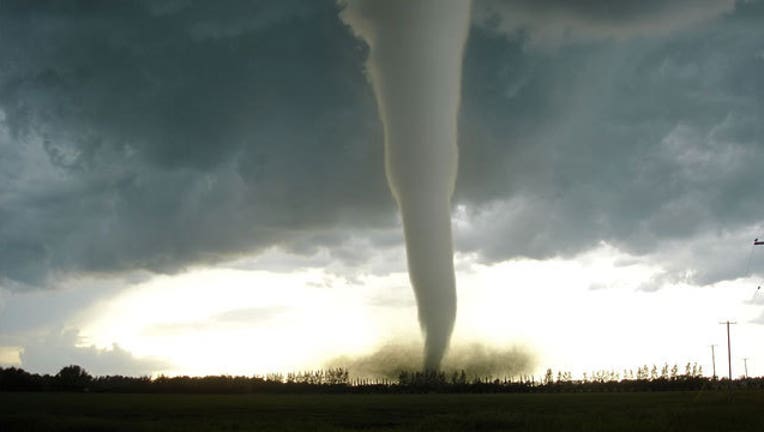 BREAUX BRIDGE, La. (AP) - A tornado flipped a mobile home Sunday in Louisiana, killing a mother and her 3-year-old daughter as a storm system with hurricane-force winds crawled across the Deep South, damaging homes and businesses.

Louisiana Gov. John Bel Edwards put the entire state on "high alert" and warned residents to stay off the roads. He urged people to keep their cellphones charged and close by so that they could get severe weather alerts through Monday.

"It is an extremely dangerous weather event," he said.

Parts of Arkansas and Mississippi were also under a threat of tornadoes, but the bullseye was on much of Louisiana. The system packed heavy rain, large hail and sparked flash flooding. Up to 6 inches of rain could fall in some areas.

A tornado with peak winds of 110 mph (180 kph) traveled for nearly 1 mile (1.6 kilometers) on the ground in the rural community of Breaux Bridge, about 50 miles (80 kilometers) west of Baton Rouge, the National Weather Service reported.

"Seconds later it hit," Higgins said. "It hit the trailer, flipped it and tore its side off. There was a mother and daughter inside and both were killed."

Higgins said 38-year-old Francine Gotch and 3-year-old Nevaeh Alexander were pronounced dead at the scene. Witnesses told KLFY-TV that the father was at the store when the storm hit and returned home to find the bodies amid the splintered debris.

Relatives described those killed as a fun-loving pair who smiled frequently.

Nevaeh "was the sweetest little girl," said Sheryle Rubin, who's engaged to the girl's uncle. "She was only 3 years old but was the smartest girl in the world. She would've started school in August."

The weather agency warned that it was a "particularly dangerous situation" in Louisiana, which the governor noted was a rare high-level warning. Straight line winds could reach upward of 80 mph (130 kph) winds. Hurricanes have at least 74 mph (120 kph) winds.

"This is a statewide weather event," the governor said. "It's likely to be an all-night event. We don't expect the weather system to leave the state of Louisiana until sometime tomorrow morning."

Another hard-hit area in Louisiana was the city of Alexandria, where winds blew off the roof of a gas station and knocked out power to thousands, KALB reported. Customers and storm employees sought shelter in a beer cooler.

National Weather Service meteorologist John Hart in Oklahoma said there was a significant risk of weather for Mississippi and Alabama as the system keeps moving east.

"There was one home with pretty heavy damage. The roof was completely removed. There was one resident there at the time, but she received no major injuries," Norman said.

This story corrects the 3-year-old girl's name to Nevaeh, not Neville.