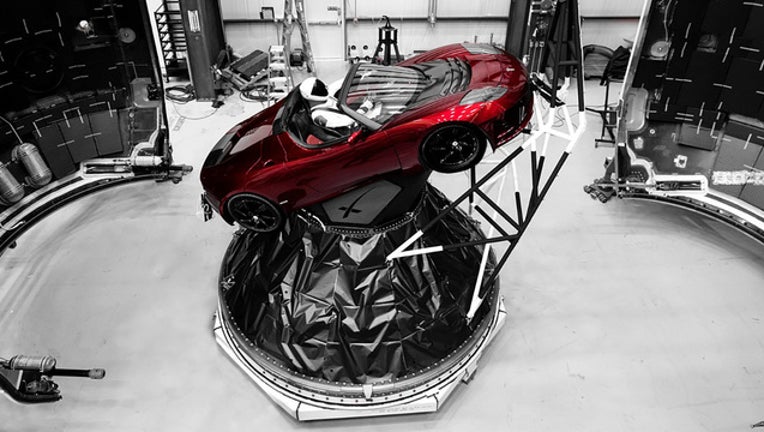 CAPE CANAVERAL, Fla. (AP) - A SpaceX "Starman" is aboard the company's new rocket that's set to make its launch debut from Florida.

SpaceX chief executive Elon Musk revealed pictures of the surprise passenger Monday. The figure is in the driver's seat of Musk's red Tesla Roadster, the cargo for Tuesday's first test flight of the Falcon Heavy. The right hand is on the wheel while the left arm rests on the convertible's door.

Starman, as Musk calls him, is wearing a white-and-black-trimmed spacesuit and helmet. It's the same outfit real astronauts will wear when riding SpaceX rockets from Florida a year or so from now, bound for the International Space Station.

Musk, who also runs the electric car company Tesla, is sending his Roadster into a long solar orbit stretching out to Mars.

Last week, the Federal Aviation Administration officially licensed the flight from Kennedy Space Center. The Falcon Heavy, at liftoff, will be the world's most powerful rocket currently in operation.

A David Bowie fan, Musk has promised via Twitter to have the car soundtrack playing "Space Oddity." during liftoff. "Starman," is the title of a Bowie song from 1972. That's three years after the late rocker penned "Ground Control to Major Tom" for "Space Oddity."

"There's a Starman waiting in the sky," goes Bowie's "Starman."

If the flight succeeds, Musk's Starman should cruise around the sun for a billion years.