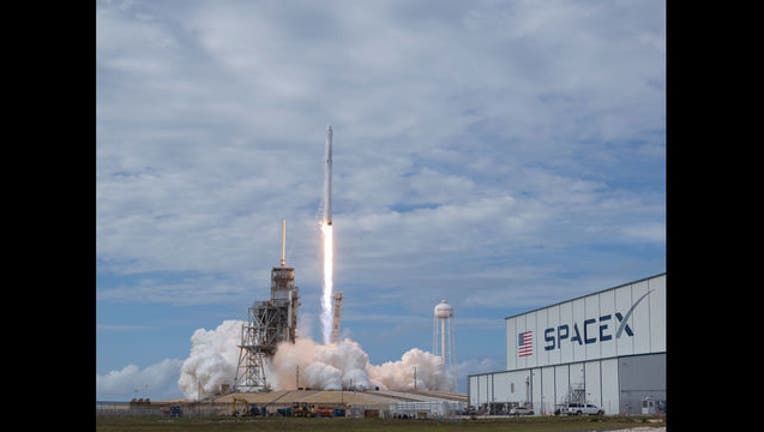 In this handout provided by NASA, the SpaceX Falcon 9 rocket, with the Dragon spacecraft onboard, launches from pad 39A at NASA's Kennedy Space Center on June 3, 2017 in Cape Canaveral, Florida. (Photo by Bill Ingalls/NASA via Getty Images)

HAWTHORNE (FOX 11 / CNS) - Hawthorne-based SpaceX on Thursday launched a trio of satellites aboard a rocket from Vandenberg Air Force Base.

The launch of the Falcon 9 rocket was originally set for last Saturday, but it was delayed until Sunday, then to Wednesday -- with Wednesday's postponement attributed to weather.

The Falcon 9 rocket's primary payload is a Spanish-government Paz satellite, but documents filed with the federal government indicate the rocket will also be deploying a pair of demonstration satellites that are part of Elon Musk's vision to create a space-based broadband network providing worldwide affordable internet access.

According to a communication between SpaceX and the Federal Communications Commission, the mission will deploy satellites known as Microsat-2a and Microsat-2b. Those satellites were described by the company in an earlier license application as part of a test of a "broadband antenna communications platform.''

Documents cited in media reports identify the satellites as part of a SpaceX program known as "Starlink,'' which envisions an array of nearly 12,000 satellites circling Earth within about six years, creating a worldwide internet system.

A December launch of a SpaceX Falcon 9 rocket from Vandenberg created an evening visual spectacle over the Southland, with hundreds of people snapping photos of the light show and posting them online, with some even suggesting it was an alien invasion.

The Falcon 9 rocket in Thursday's mission was previously used in an August launch, then successfully recovered for use in future missions. SpaceX, which has been perfecting the system of recovering rockets to reduce mission costs, will not attempt to recover the rocket again Thursday.