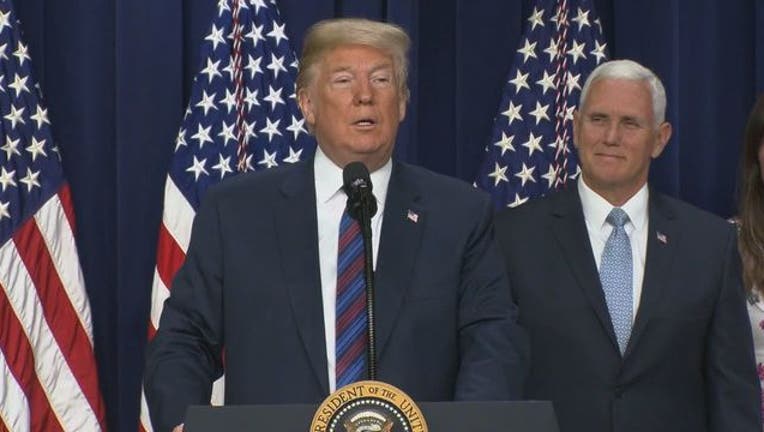 WASHINGTON - (AP) -- The Trump administration announced Thursday it will impose tariffs on steel and aluminum imports from Europe, Mexico and Canada after failing to win concessions from the American allies. Europe and Mexico pledged to retaliate quickly, exacerbating trans-Atlantic and North American trade tensions. Financial markets fell amid fears of a trade war.

Commerce Secretary Wilbur Ross said the tariffs would be 25 percent on steel and 10 percent on aluminum, and go into effect on Friday, as the administration followed through on the penalties after earlier granting exemptions to buy time for negotiations. President Donald Trump had announced the tariffs in March, citing national security concerns.

The U.S. action widens a rift with America's closest allies, threatens to drive up prices for companies and consumers that buy steel and aluminum, heightens uncertainty for businesses and is already alarming investors in global financial markets.

Financial markets dipped amid concerns about the disputes among trading partners, with the Dow Jones industrial average dropped more than 200 points.

The tariffs directed at some of the U.S.'s most ardent allies represented the latest move in Trump's "America First" agenda that has roiled financial markets and raised the specter of a trade war involving the U.S., China and some of the globe's most dominant economies.

The trade actions have opened the U.S. to criticism that it's burning bridges at a time when Trump is seeking to rid North Korea of nuclear weapons and help stabilize the Middle East.

"We are alienating all of our friends and partners at a time when we could really use their support," said Wendy Cutler, a former U.S. trade negotiator who is now vice president at the Asia Society Policy Institute.

Ross told reporters that talks with Canada and Mexico over revising the North American Free Trade Agreement were "taking longer than we had hoped." Talks with Europe had "made some progress" but not enough for additional exemptions, he said in a conference call from Paris.

"We continue to be quite willing and indeed eager to have further discussions," Ross said. He said he planned to travel to China on Friday for trade talks between the world's two biggest economies.

In terms of the NAFTA talks, the tariffs could hinder the negotiations among the North American neighbors. Ross said there was "no longer a very precise date when they may be concluded and therefore (Canada and Mexico) were added into the list of those who will bear tariffs."

Brazil, Argentina and Australia have agreed to limit steel shipments to the U.S. in exchange for being spared the tariffs, the Commerce Department said. Tariffs will remain on imports from Japan.

Fears of a global trade war are already weighing on investor confidence and could hinder the global economic upturn. European officials argue that tit-for-tat tariffs will hurt growth on both sides of the Atlantic and Canada said before the announcement that it would respond in kind.

"Canada considers it frankly absurd that we would in any way be considered to be a national security threat to the United States," Canadian Foreign Minister Chrystia Freeland said before the tariffs were announced. "The government is absolutely prepared to and will defend Canadian industries and Canadian jobs. We will respond appropriately."

German Chancellor Angela Merkel stressed her opposition even before the U.S. announcement, saying the looming tariffs were incompatible with World Trade Organization rules. She said if there were no exemptions, "We will respond in an intelligent, decisive and joint way."

"This will only lead to the victory of those who want less growth, those who don't think we can develop our economies across the world. We think on the contrary that global trade must have rules in a context of multilateralism. We are ready to rebuild this multilateralism with our American friends," he said.

The EU trade commissioner, Cecilia Malmstrom, said the EU "did everything to avoid this outcome." Noting her discussions with U.S. officials, she said. "I have argued for the EU and the US to engage in a positive trans-Atlantic trade agenda, and for the EU to be fully, permanently and unconditionally exempted from these tariffs."

Even some Trump allies in Congress said the trade moves were misguided. "Tariffs on steel and aluminum imports are a tax hike on Americans and will have damaging consequences for consumers, manufacturers and workers," said Sen. Orrin Hatch, R-Utah.

Tariffs on steel and aluminum imports to the U.S. can help local producers of the metals by making foreign products more expensive. But they can increase costs more broadly for U.S. manufacturers that cannot source all their needs locally and have to import the materials. That hurts the companies and can lead to more expensive consumer prices, economists say.

"Unilateral responses and threats over trade war will solve nothing of the serious imbalances in world trade. Nothing," French President Emmanuel Macron said Wednesday.

In a clear reference to Trump, Macron added: "These solutions might bring symbolic satisfaction in the short term. ... One can think about making voters happy by saying, `I have a victory, I'll change the rules, you'll see."'

Besides the U.S. steel and aluminum tariffs, the U.S. is also investigating possible limits on foreign cars in the name of national security.