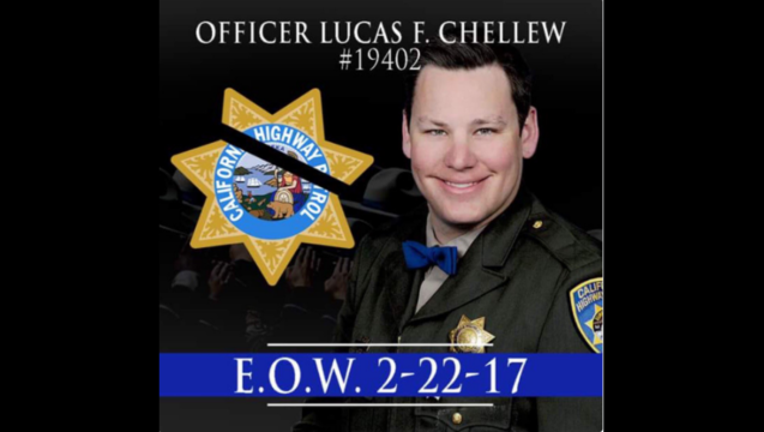 SACRAMENTO, Calif. (AP) - There's an outpouring of grief over the death of Officer Lucas Chellew, who followed his father's footsteps into the California Highway Patrol.

Authorities say Chellew was chasing a suspect on a motorcycle in South Sacramento on Wednesday when a collision occurred and he lost control of his motorcycle. Authorities are investigating the collision.

Chellew, who was a seven-year veteran of the CHP, was transported to University of California, Davis, Medical Center, where he later died.

"His service and sacrifice will forever be honored and never forgotten," said CHP Commissioner Joe Farrow in a statement.

The CHP will hold a tribute ceremony at noon Thursday with the ceremonial ringing of a memorial bell in honor of the fallen officer.

Chellew, 31, graduated from the CHP Academy in West Sacramento in May 2009 and was assigned to the South Sacramento Area office, according to a CHP spokesman.

His father, Charles Chellew, is a retired CHP captain and his sister, Hanna Chellew, is a CHP officer, according to the governor's statement.

Lucas Chellew is survived by a wife, Christina, a daughter and a son.

This story has been corrected to reflect that Officer Lucas Chellew had been with the CHP for seven years, not eight as authorities had previously said.