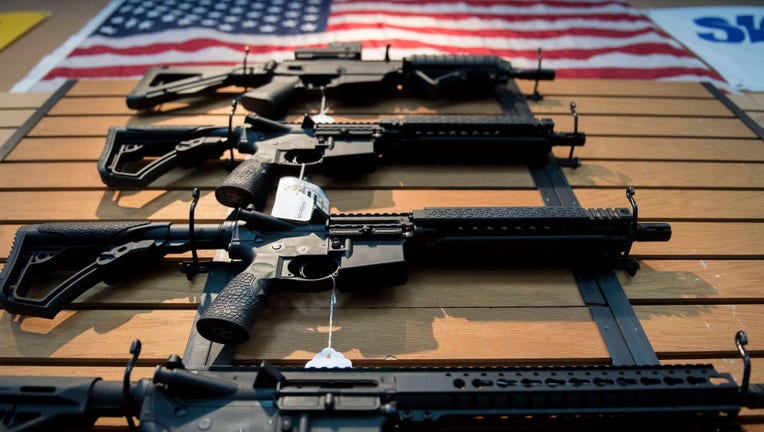 Assault rifles hang on the wall for sale at Blue Ridge Arsenal in Chantilly, Virginia, on October 6, 2017. (JIM WATSON/AFP via Getty Images)

PROVIDENCE, R.I. - The Supreme Court’s decision overturning a gun-permitting law in New York has states with robust firearms restrictions scrambling to respond on two fronts — to figure out what concealed-carry measures they might be allowed to impose
while also preparing to defend a wide range of other gun control policies.

The language in the court’s majority opinion heightened concern that other state laws, from setting an age limit on gun purchases to banning high-capacity ammunition magazines, may now be in jeopardy.

"The court has basically invited open season on our gun laws, and so I expect litigation across the board," said New Jersey acting Attorney General Matt Platkin, a Democrat. "We’re going to defend our gun laws tooth-and-nail because these gun laws save lives."

The court ruling issued Thursday specifically overturned a New York law that had been in place since 1913 and required that people applying for a concealed carry permit demonstrate a specific need to have a gun in public, such as showing an imminent threat to their safety. The court’s conservative majority said that violated the Second Amendment, which they interpreted as protecting people’s right to carry a gun for self-defense outside the home.

While the ruling does not address any other laws, the majority opinion opens the door for gun rights advocates to challenge them in the future, said Alex McCourt, the director of legal research for the Johns Hopkins Center for Gun Violence Solutions.

Pro-firearms groups in several states said they plan to do just that.

Attorney Chuck Michel, president of the California Rifle and Pistol Association, said the group is preparing to expand its legal challenges based on the high court changing the legal standard used to assess whether gun control laws are constitutional.

Courts must now consider only whether a gun control regulation is consistent with the Second Amendment’s actual text and its historical understanding, according to Thursday's ruling. Before that, judges also could consider a state's social justification for passing a gun control law.

Michel said the standard will affect three prominent California laws. Legal challenges to the state’s limits on assault weapons, its requirement for background checks for buying ammunition and its ban on online ammunition sales are pending before a federal appellate court.

"All of these laws should be struck down under this new Supreme Court standard," he said.

The Supreme Court also is considering whether to take up California’s law banning ammunition magazines that hold more than 10 bullets, as well as a similar law in New Jersey. He expects the court may consider those laws under the new standard.

The new restrictive landscape for gun laws outlined in Thursday's majority opinion is not without escape routes for states, especially those that may want to impose some limits on concealed carry permits.

Justice Brett Kavanaugh, joined by Chief Justice John Roberts, said states still can require people to get a license to carry a gun and condition that on such things as background checks and mental health records. They also can limit where guns are allowed, suggesting that states can prohibit firearms in "sensitive places" such as schools, courthouses or polling places.

That leaves an opening for governors and state lawmakers in New York and the six other states with similar concealed carry laws: California, Hawaii, Maryland, Massachusetts, New Jersey and Rhode Island.

In California, lawmakers are amending legislation to expand the qualifications people must have to obtain a concealed carry permit and to define the places where guns would be off-limits. The revised bill will get its first hearing Tuesday, and lawmakers hope to send it quickly to Gov. Gavin Newsom, who called Thursday's Supreme Court decision shameful.

Other Democratic governors, lawmakers and state attorneys general also vowed to defend or amend their gun laws.
Most state legislatures are finishing their sessions or have already ended for the year, so any response would likely have to wait until next year.

Rhode Island Democratic state Rep. Robert Craven, an attorney, said he would study the opinion in the New York case to determine whether or not it creates a concern that Rhode Island’s requirements could be challenged, and whether that can be remedied by legislation.

He questioned whether the high court will now employ a strict interpretation of the Second Amendment — that the right to bear arms is absolute — and apply it to other laws, such as those banning military-style weapons.

"I see the court headed in that direction," Craven said.

In Hawaii, Democratic state Sen. Chris Lee said lawmakers will try to determine how else they can ensure public safety and will look at screening, training requirements and ways to keep guns out of certain public spaces — provisions the justices said would be permitted.

Gun rights groups in Hawaii and elsewhere applauded the ruling. In Maryland, Mark Pennak, president of a gun rights group challenging that state's concealed carry law, said he's "absolutely ecstatic" about the high court’s decision because there’s "simply no way" the law can be defended any longer.

The Democratic leaders of the Maryland General Assembly said that if necessary, they will pass legislation that complies with the new precedent but still protects residents.

New Jersey Gov. Phil Murphy, a Democrat, criticized the court's opinion for limiting how states can address the proliferation of firearms in public, but vowed to protect the state's gun control measures. He said his administration believes the state can still regulate who can carry concealed weapons and where they can take them.

He vowed that his administration "will do everything in our power to protect our residents."