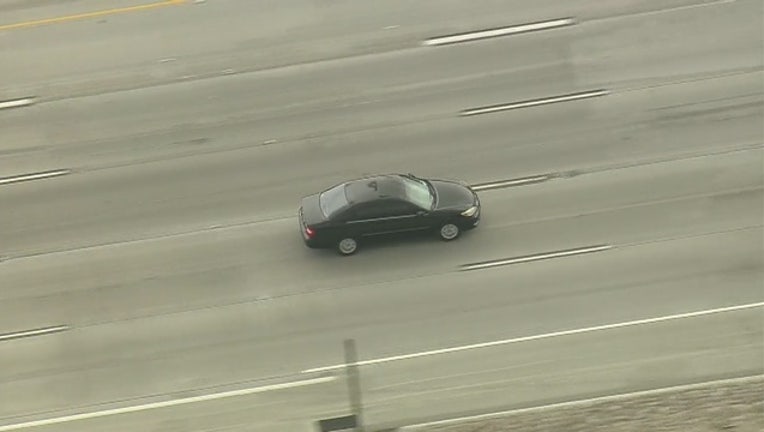 ANAHEIM, Calif. (FOX 11/CNS) - A pursuit that began in Anaheim and topped speeds of 100 mph as the suspect tried to elude authorities in three counties came to a bizarre end on Monday when the driver abandoned the vehicle and ran off, while the driver of a second vehicle sped away and was ultimately detained in Colton.

Police attempted to pull the driver over at 12:10 p.m. near Harbor Boulevard and the 91 Freeway, but the motorist kept going, Anaheim police Sgt. Daron Wyatt said.

It was still unclear by mid-afternoon if the original suspect in the chase was in custody.

According to Anaheim police Sgt. Daron Wyatt, an officer spotted a dark-colored Toyota Camry shortly after noon and determined that it had a stolen license plate -- leading police to speculate that the Camry itself had been stolen. The officer tried to pull over the driver, who responded by speeding away at speeds that topped 100 mph.

The driver got onto the eastbound 91 Freeway and sped into Riverside County and into the Cajon Pass in San Bernardino County, before he turned around and drove back into the Riverside area. At times the agitated driver --who may have had a passenger in the vehicle -- tossed items out of the window as he drove.

He occasionally drove on the wrong side of the street and maneuvered around traffic as he circled streets in Riverside County, ultimately winding up in Jurupa Valley, where he came to a stop and ran from the car and through the parking lot of an industrial building.

Officers did find an infant in the car, strapped into a car seat.

Police cordoned off the business where the original suspect abandoned the allegedly stolen vehicle.