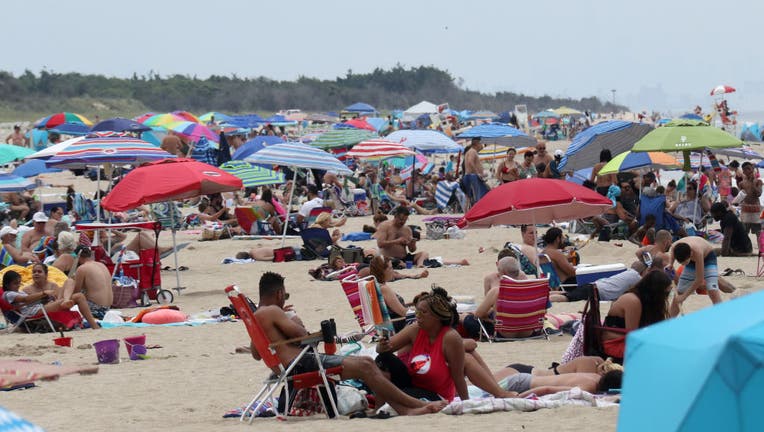 People sit on a beach at Sandy Hook park at the Jersey Shore on June 27, 2020 in Middletown, New Jersey. (Photo by Gary Hershorn/Getty Images)

The study by Environment New Jersey Research and Policy Center found that two beaches, Beachwood Beach West in Beachwood and the 25th Street Bay Front Beach in Barnegat Light, each had nine exceedances and had bacteria levels above the EPA safety threshold on more than 40% of the days tested.

In a statement, Beachwood Mayor Ron Roma said the town is “committed to finding and fixing the problems that cause our beach closings,” and plans to use trained dogs to sniff out underground sewer leaks.

Seventeen other New Jersey beaches were found to have been potentially unsafe for swimming at least twice.

Beaches were considered potentially unsafe if fecal bacteria levels exceeded the EPA’s standard associated with an estimated illness rate of 32 out of every 1,000 swimmers, according to the study.

Nationally, the study found that 386 coastal and Great Lakes beaches — or nearly one of eight surveyed — had potentially unsafe bacteria levels on at least 25% of the days tested.

Experts say the water quality at the New Jersey shore has improved from the 1980s but that it still is affected by polluted runoff from roads and parking lots, overflowing sewer systems and farms.