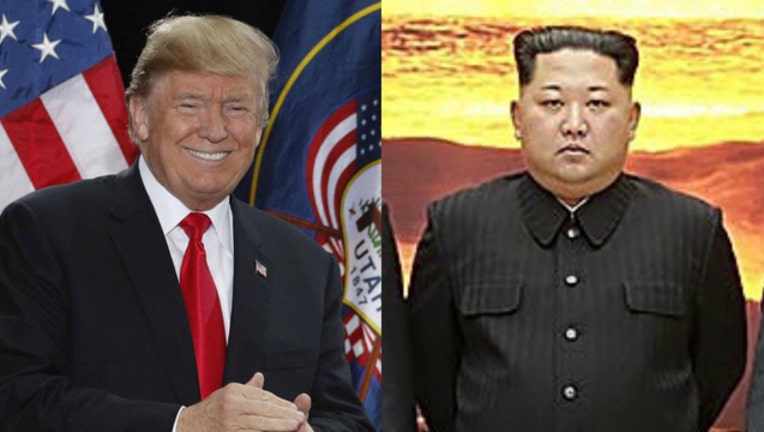 WASHINGTON - (AP) -- President Donald Trump on Friday warmly welcomed North Korea's promising response to his abrupt withdrawal from the potentially historic Singapore summit and said "we're talking to them now" about putting it back on track.

"Everybody plays games," said Trump, who often boasts about his own negotiating tactics and skill.

The president, commenting as he left the White House for a commencement speech, said it was even possible the summit could take place on the originally planned June 12 date.

Earlier Friday, in a tweet, he had called the North's reaction to his letter canceling the summit "warm and productive." That was far different from his letter Thursday to North Korea leader Kim Jong Un, blaming "tremendous anger and open hostility" by Pyongyang for the U.S. withdrawal.

The tone from both sides was warmer on Friday. First, North Korea issued a statement saying it was still "willing to give the U.S. time and opportunities" to reconsider talks "at any time, at any format."

Vice Foreign Minister Kim Kye Gwan called Trump's withdrawal "unexpected" and "very regrettable," and said the cancellation of the talks showed "how grave the status of historically deep-rooted hostile North Korea-U.S. relations is and how urgently a summit should be realized to improve ties."

Then Trump, in his response to that response, said it was "very good news," and "we will soon see where it will lead, hopefully to long and enduring prosperity and peace. Only time (and talent) will tell!"

At the Pentagon, Defense Secretary Jim Mattis called the recent back-and-forth between Trump and North Korea the "usual give and take."

The president's surprise exit from the planned talks on Thursday had capped weeks of high-stakes brinkmanship between the two unpredictable leaders over nuclear negotiating terms for their unprecedented sit-down. The U.S. announcement came not long after Kim appeared to make good on his promise to demolish his country's nuclear test site. But it also followed escalating frustration -- and newly antagonistic rhetoric -- from North Korea over comments from Trump aides about U.S. expectations for the North's "denuclearization."

The White House has repeatedly offered mixed messages. Hours after releasing his cancellation letter on Thursday, the president declared, "I really believe Kim Jong Un wants to do what's right."

After that, however, a senior White House official said the North had reneged on its promises ahead of the summit. Trump said from the White House that a "maximum pressure campaign" of economic sanctions and diplomatic isolation would continue against North Korea -- with which the U.S. is technically still at war -- though he added that it was possible the summit could still take place at some point.

The senior U.S. official said the North violated a pledge to allow international inspectors to monitor the supposed implosion of the test site. International journalists were present, but the U.S. government can't verify the site's destruction. The official spoke on the condition of anonymity to avoid overshadowing Trump's comments Thursday.

Russian President Vladimir Putin, a staunch ally of Kim Jong Un, said the North Korean leader had in fact done "everything that he had promised in advance, even blowing up the tunnels and shafts" of the site. Putin said of Trump's cancellation announcement, "In Russia we took this news with regret."

On Friday, North Korea's vice foreign minister said his country's "objective and resolve to do our best for the sake of peace and stability of the Korean Peninsula and all humankind remain unchanged."

Trump, in his letter to Kim, objected specifically to a statement from a top North Korean Foreign Ministry official. That statement referred to Vice President Mike Pence as a "political dummy" for his comments on the North and said it was up to the Americans whether they would "meet us at a meeting room or encounter us at nuclear-to-nuclear showdown."

Underscoring the high stakes, Trump said he had spoken with military leaders, as well as Japan and South Korea, and stressed that the United States was prepared for any threat.

Still, Trump's cancellation announcement had appeared to surprise South Korea, which had pushed to keep the summit on track as recently as Tuesday, when President Moon Jae-in met with Trump in the Oval Office and said the "fate and the future" of the Korean Peninsula hinged on the talks. The Blue House said Thursday that it was trying to figure out Trump's intentions in canceling the summit.

Trump, who considers himself a master dealmaker, has confounded aides and allies at every turn of the fateful flirtation with the North. He looked past the warnings of senior aides when he accepted Kim's invitation to meet back in March. He unveiled the date and the time with characteristic showmanship. And after initially projecting calm in the face of North Korea's escalating rhetoric, he made a sudden about face, though his letter also waxed poetic about the "wonderful dialogue" emerging between the two leaders.

Wrote Trump: "If you change your mind having to do with this most important summit, please do not hesitate to call me or write."

Trump's aides had warned that merely agreeing to the summit had provided Kim with long-sought international legitimacy and, if Trump ultimately backed out, risked fostering the perception that the president was insufficiently committed to diplomatic solutions to the nuclear question.

U.S. defense and intelligence officials have repeatedly assessed the North to be on the threshold of having the capability to strike anywhere in the continental U.S. with a nuclear-tipped missile -- a capacity that Trump and other U.S. officials have said they would not tolerate.

Secretary of State Mike Pompeo, testifying Thursday on Capitol Hill, said North Korea had not responded to repeated requests from U.S. officials to discuss logistics for the summit. He told the Senate Foreign Relations Committee the lack of response was an additional reason for Trump's decision.

"We got a lot of dial tones, Senator," he told committee chairman Bob Corker.

A White House team was set to fly to Singapore this weekend to continue logistical planning for the meeting.

Trump suggested this week that China was to blame for "a little change" in Kim's attitude. Kim paid a secret visit to his primary ally just before Pompeo's visit, and China is wary of any shift in the balance of power on the Korean peninsula.

White House officials have privately predicted for weeks that the summit could be canceled once or twice before actually taking place. Trump has seemed to welcome chatter of a Nobel Peace Prize, but that had yielded in recent weeks to the sobering prospect of ensuring a successful outcome with the Kim.