Police in Merced are trying to determine if a man who tired killing himself when confronted by law enforcement is connected to the abduction of a family in Merced. The family is still missing. The person of interest is alleged to have used an ATM card belonging to one of the kidnapping victims.

MERCED, Calif. - The suspect in the killing of a Merced family had worked for the victims at one point, according to a relative.

The relative told KTVU that Jesus Manuel Salgado, 48, once drove a truck for the family's company, but wasn't asked to stay on. The relative said Salgado harbored anger over that.

Relatives told investigators that Salgado had sent angry text messages or emails about a year ago after working with trucking business, Warnke said.

The bodies of 8-month-old Aroohi Dheri, her parents Jasleen Kaur, 27, and Jasdeep Singh, 36; and her uncle Amandeep Singh, 39., were found at an orchard in Merced County two days after they were kidnapped at gunpoint from their business, police said.

"Our worst fears have been confirmed," Warnke said at a Wednesday night news conference.

Warnke said the victims were close to each other when found by a farmworker tending to an almond orchard in a remote area near the town of Dos Palos, a town about 30 miles south of Merced where the family was kidnapped on Monday. 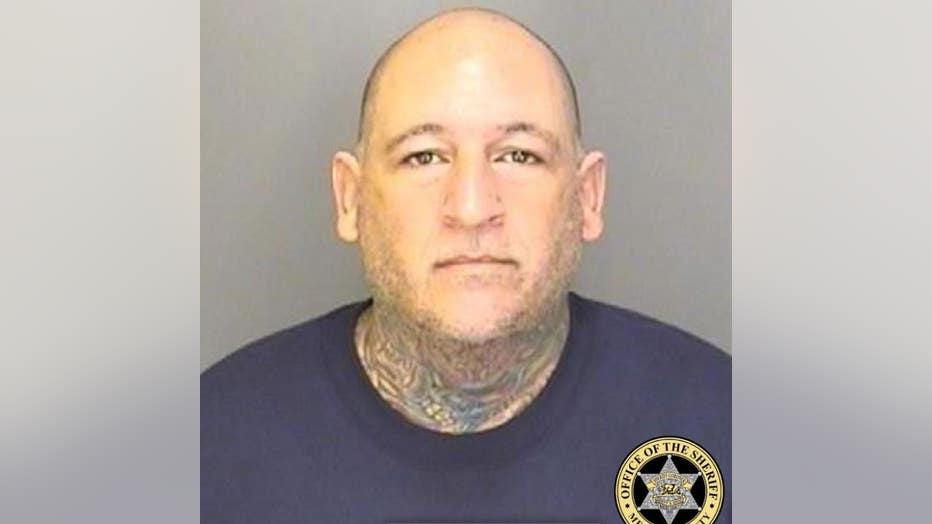 Jesus Manuel Salgado, a kidnapping and murder suspect was booked into jail by Merced County Sheriff's Office on Oct. 6, 2022.

A source close to the investigation told KTVU that the two brothers were killed with a machete. The source said Kaur was then shot as she held her baby girl in her arms. The baby was then left to die.

Sheriff's officials said they believed the family was killed before their relatives reported them missing Monday.

The video showed the suspect first walking by the property before talking to one of the men. Later, it shows him leading the men, who had their hands zip-tied behind their backs, into the back seat of Amandeep Singh’s pickup truck. The suspect then went back to the trailer that served as the business office and led Jasleen Kaur, who was carrying her baby in her arms, out and into the truck before the suspect then drove away.

Surveillance video taken at a vehicle storage business in Merced shows a man in a hoodie and a medical mask walking two brothers out of a portable and then going back inside to get the mother and the baby. The family was found dead two days later.

Warnke said the kidnapper made no ransom demands but that he believed it was a financially motivated crime.

Authorities said Salgado, already a convicted robber, tried to kill himself a day after the kidnappings. He was in critical condition when taken into custody, but has been talking to police, Warnke said.

Salgado was booked into Merced County Jail Thursday evening, sheriffs' department officials said. He was arrested for four counts of murder and four counts of kidnapping. Investigators and detectives from assisting agencies are looking into leads of any additional people who may have been involved in this crime, officials said.

Family members said nothing was stolen from the trucking company but that their relatives were all wearing jewelry. Warnke had said that after the kidnappings, an ATM card belonging to one of the victims was used in Atwater. Public records show the family owns Unison Trucking Inc. and family members said they had recently opened an office for it in a parking lot the Singh brothers also operated.

Family members on Wednesday asked anyone who owns a convenience store or gas station in the area to check their surveillance cameras for images of the suspect or those missing. They said they were worried the baby wasn’t being fed because the family didn’t have any baby food with them at the time of the kidnapping.

An 8-month-old girl, her parents and uncle were abducted at gunpoint, Merced County sheriff's officials said.

Relatives of Salgado contacted authorities and told them he had admitted to them, he was involved with the kidnapping, Warnke told KFSN-TV on Tuesday. Salgado tried to take his own life before police arrived at a home in nearby Atwater. Salgado was hospitalized following the suicide attempt.