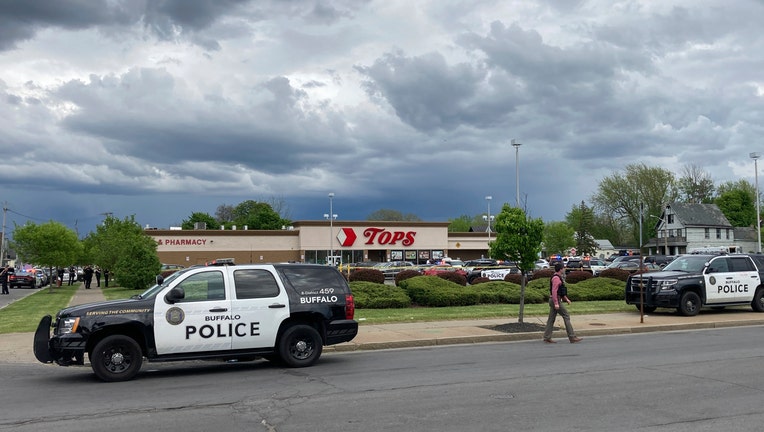 BUFFALO, N.Y. - A gunman in military-style clothing opened fire with a rifle at a supermarket in Buffalo, New York, in what authorities called a "hate crime and racially motived violent extremism," killing 10 people and wounding three others before being taken in custody Saturday afternoon, law enforcement officials said.

The gunman was identified as Payton Gendron, 18, of Conklin, a community about 200 miles (320 kilometers) southeast of Buffalo in New York state, two law enforcement officials told the AP. The officials were not permitted to speak publicly on the matter and did so on the condition of anonymity.

Gendron was questioned by the FBI one of the officials said.

Wearing a hospital gown, Gendron was arraigned in court Saturday evening on first-degree murder charges and ordered detained without bail. Another court hearing is scheduled for next week.

A total of 13 people were shot at the Tops Friendly Market. The survivors' conditions weren't immediately available.

At a news conference following the shooting, Buffalo Mayor Byron Brown said the suspect traveled hours to the area to carry out the mass shooting.

"This is the worst nightmare that any community can face, and we are hurting and we are seething right now," Mayor Brown said at the news conference. "The depth of pain that families are feeling and that all of us are feeling right now cannot even be explained."

Erie County Sheriff John Garcia added, "This was pure evil. It was straight up racially motivated hate crime from somebody outside of our community, outside of the City of Good neighbors ... coming into our community and trying to inflict that evil upon us."

A US attorney at the conference said the FBI is investigating the shooting as both a hate crime and racially motivated violent extremism.

"He exited his vehicle. He was very heavily armed. He had tactical gear. He had a tactical helmet on. He had a camera that he was livestreaming what he was doing," city Police Commissioner Joseph Gramaglia said at a news conference afterward.

Investigators said the gunman, who is white, had a camera affixed to his helmet. Investigators are looking into whether he had posted a manifesto online, police officials said. Officials said they have evidence of racial animosity from the suspect in their possession.

Gramaglia said the gunman initially shot four people outside the store, three fatally. Of the 13 people shot, 11 were described as African American, two victims were white.

The video showed the gunman pulling up to the front of the store with a rifle on the front seat and then pointing the rifle at people in the parking lot as he exited the vehicle and opening fire, a police official said.

It also shows the suspect walking into the supermarket and shooting several other victims inside, the official said.

The supermarket is in a predominately Black neighborhood, about 3 miles (5 kilometers) north of downtown Buffalo. The surrounding area is primarily residential, with a Family Dollar store and fire station near the store.

Witnesses reported the gunman was wearing military-style clothing and body armor, one of the officials said.

Officials at the news conference said a recently-retired Buffalo police officer was working as a security guard at the store. He fired multiple shots at the suspected gunman and struck him, but because he was wearing tactical gear, including a bullet-proof vest he survived, Gramaglia added. The commissioner said the suspect shot and killed the security guard and then surrendered to police shortly after. 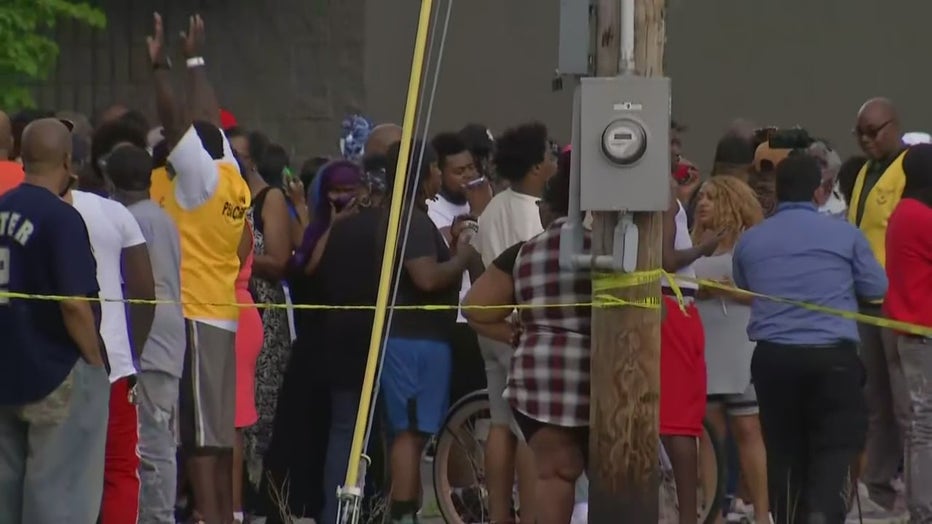 Braedyn Kephart and Shane Hill, both 20, pulled into the parking lot just as the shooter was exiting. They described him as a white male in his late teens or early twenties sporting full camo, a black helmet and what appeared to be a rifle.

"He was standing there with the gun to his chin. We were like what the heck is going on? Why does this kid have a gun to his face?" Kephart said. He dropped to his knees. "He ripped off his helmet, dropped his gun, and was tackled by the police."

Gramaglia said Buffalo police entered the store and confronted the gunman in the vestibule.

"At that point the suspect put the gun to his own neck. Buffalo police personnel -- two patrol officers -- talked the suspect into dropping the gun. He dropped the gun, took off some of his tactical gear, surrendered at that point. And he was led outside, put in a police car," he said.

Police closed off the block, lined by spectators, and yellow police taped surrounded the full parking lot. Mayor Brown quickly arrived to the scene before he addressed media.

At the White House, Press Secretary Karine Jean-Pierre said President Joe Biden is receiving regular updates on the shooting and its aftermath.

"The president has been briefed by his Homeland Security advisor on the horrific shooting in Buffalo, N.Y., this afternoon. He will continue to receive updates throughout the evening and tomorrow as further information develops," she said, adding the president and first lady were praying for the victims and their loved ones.

He later issued a statement that confirmed the DOJ would investigate this incident as a hate crime and an act of racially-motivated violent extremism.

"Tonight, the country mourns the victims of a senseless, horrific shooting in Buffalo, New York. The FBI and ATF are working closely with the Buffalo Police Department and federal, state, and local law enforcement partners," Garland's statement read. "The Justice Department is committed to conducting a thorough and expeditious investigation into this shooting and to seeking justice for these innocent victims."

Gov. Kathy Hochul tweeted that she was "closely monitoring the shooting at a grocery store in Buffalo," her hometown. She said state officials have offered help to local authorities. 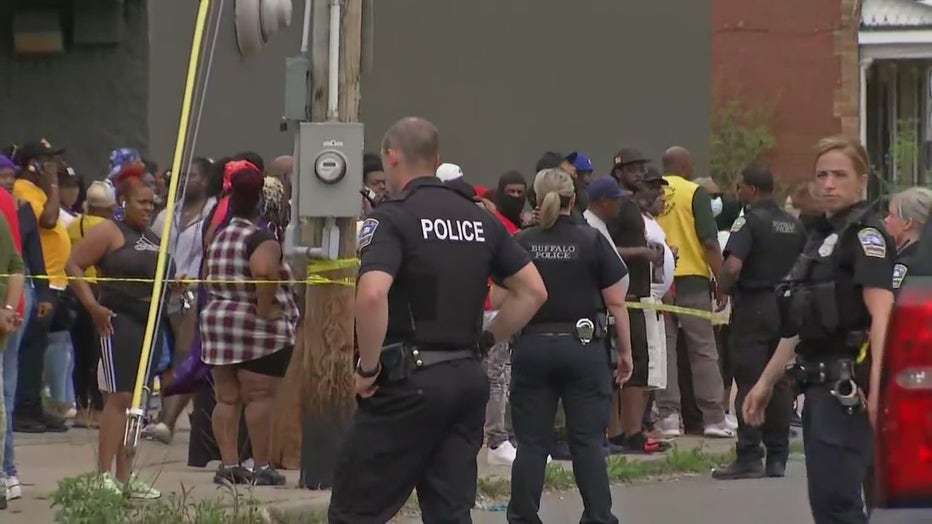 The Erie County Sheriff's Office said on social media that it ordered all available personnel to assist Buffalo police.

Tops Friendly Markets released a statement saying, "We are shocked and deeply saddened by this senseless act of violence and our thoughts and prayers are with the victims and their families."

More than two hours after the shooting, Erica Pugh-Mathews was waiting outside the store, behind the police tape.

"We would like to know the status of my aunt, my mother's sister. She was in there with her fiancé, they separated and went to different aisles," she said. "A bullet barely missed him. He was able to hide in a freezer but he was not able to get to my aunt and does not know where she is. We just would like word either way if she's OK."

Elsewhere, NAACP President Derrick Johnson issued a statement in which he called the shooting "absolutely devastating."

"Our hearts are with the community and all who have been impacted by this terrible tragedy. Hate and racism have no place in America. We are shattered, extremely angered and praying for the victims' families and loved ones," he added.

Separately, the Rev. Al Sharpton called on the White House to convene a meeting with Black, Jewish and Asian "to underscore the Federal government (is) escalating its efforts against hate crimes." In a tweet, Sharpton said that "leaders of all these communities should stand together on this!"

The shooting came little more than a year after a March 2021 attack at a King Soopers grocery in Boulder, Colorado, that killed 10 people. Investigators have not released any information about why they believe the man charged in that attack targeted the supermarket.

KTVU contributed to this report.