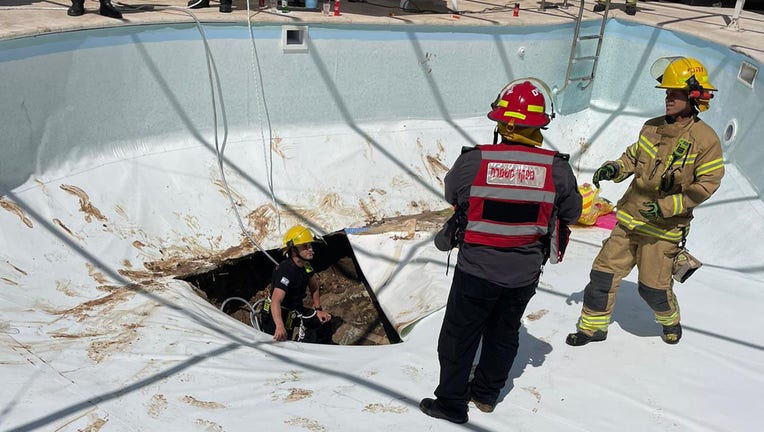 The sinkhole in the swimming pool is pictured on July 21, 2022, in Karmei Yosef, Israel. (Credit: Israel Fire and Rescue Services)

A man in Israel was found dead this week after a sinkhole opened up at the bottom of a swimming pool, dragging him down with the receding water, authorities said.

The incident was reported Thursday at a home in the town of Karmi Yosef in central Israel. It happened during a pool party being held for employees of a private company, according to the Times of Israel.

A second person was also dragged into the sinkhole, but managed to climb their way out and suffered some minor injuries, Israel’s Fire and Rescue Authority said.

Search teams spent four hours in a "complex rescue operation" searching for the man, according to the news outlet. GoPro cameras were strapped to the helmets of the rescue team as they were lowered deep underground, the Times reported.

Authorities said fears of a secondary collapse made the rescue more complicated. As a result, the team built a support structure to prevent the swimming pool’s surface from further collapsing during the search for the man’s body — which was later located.

Video shared online appears to show when the swimming pool first collapsed. Several people can be seen in the pool as the sinkhole appears, sending bystanders fleeing out of the pool and pool floats barreling toward the center. 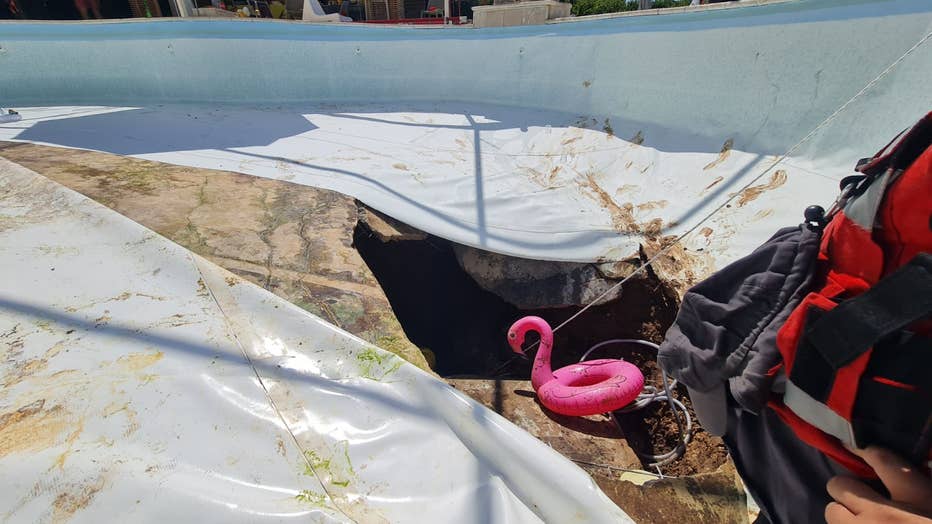 The sinkhole in the swimming pool is pictured on July 21, 2022, in Karmei Yosef, Israel. (Credit: Israel Fire and Rescue Services)

One of the people in attendance told a local television news station that there had been roughly 50 people at the party.

"The water level suddenly started receding and a hole opened up, creating a vortex that swept two people inside," the person said, according to the Times of Israel.

Aviv Bublil, a lifeguard who worked at the pool party, told the Israeli news site Ynet that it happened around 2:00 p.m. local time and she screamed for the people to exit the pool, but they stayed.

Bublil added that the swimmers may have thought it was a game, perhaps not realizing they were in danger.

"Seconds later the ground just dropped, something that looked like a giant sinkhole," Bublil told Ynet. "I saw two people ... two people were missing. One who we could not locate, and one could be seen among the rubbles from above. My first instinct was to try and get inside ... but there was no option to go inside. So they called the rescue services."

Local authorities said they were investigating the death and whether the pool was operating with the proper licensing.

What causes a sinkhole?

A sinkhole is a "depression" in the ground that has no natural external surface drainage, according to the U.S. Geological Survey. This means that when it rains, all of the water stays inside the sinkhole and typically drains into the area below the earth's surface.

They are most common in areas where the types of rock below the land surface can naturally be dissolved by groundwater circulating through them. This includes soluble rocks like salt beds and domes, limestone, gypsum, and other carbonate rock, the USGS says.

When water from rainfall moves down through the soil, these rocks begin to dissolve — creating an underground space.

"Sinkholes are dramatic because the land usually stays intact for a period of time until the underground spaces just get too big. If there is not enough support for the land above the spaces, then a sudden collapse of the land surface can occur," the USGS states online.

A large sinkhole that appeared on farmland in the Mexican state of Puebla on May 29 continues to grow. Credit - Jose Castanares / Agencia EsImagen.mx via Storyful

In the U.S., there is no database that tracks how many sinkholes collapse each year. Many go unreported because they occur in rural areas and aren’t discovered, according to the scientific agency.

Over the last 15 years, it’s estimated that sinkholes have caused at least $300 million per year in damage, although the USGS states that the real cost is likely much higher.

Last week, parts of New York City turned into rivers and waterfalls after heavy rain — resulting in a sinkhole that opened up in the Bronx and swallowed a van.

Another massive sinkhole was recently discovered in China with ancient trees over 130 feet in length growing at the bottom, according to reports.

In 2013, a sinkhole opened up underneath a Florida home, killing the man sleeping inside.