Taka's journey from burn victim to everyone’s favorite four-legged superhero is nothing short of extraordinary.

Badly burned in a house fire, Taka showed up at the Augusta, Georgia, veterinary clinic where Lesley works screaming and "still smoking," by far the worst burn case Lesley had ever seen in her career.

"He was in excruciating pain," Lesley recalled in an interview with FOX TV Stations. "After a couple of days is when we realized how bad it really was."

The team called on a specialist at the University of Georgia for advanced care, but "within 48 hours we were picking him up because all they wanted to do was euthanize him," Lesley said.

That was three years ago.

Today, Taka is a certified therapy dog with fans near and far. His journey from burn victim to everyone’s "favorite four-legged superhero" is nothing short of extraordinary. 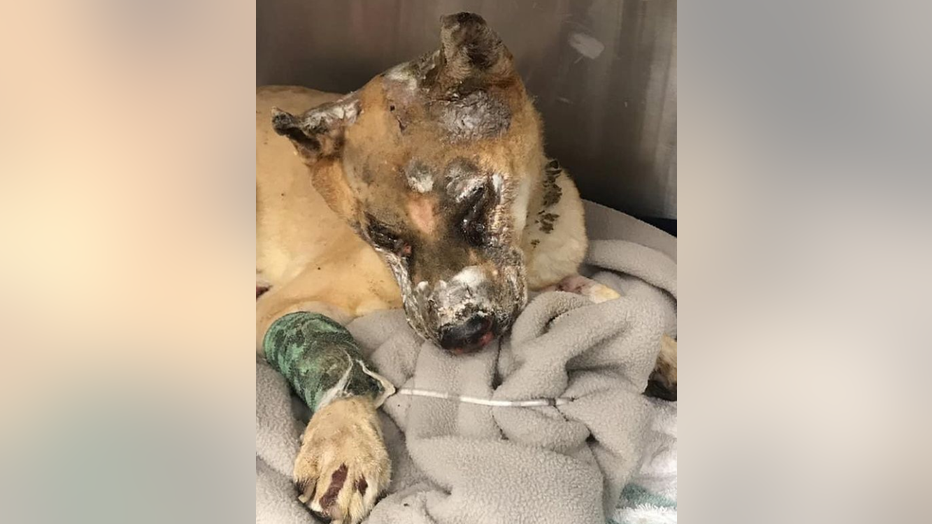 When Lesley picked up Taka from the University of Georgia, she knew there was still a good chance he would have to be euthanized.

"That wasn’t off the table if that’s what needed to be done ... we were aware of the severity of his injuries," she said. "But when you sat there and just stared into his eyes, he was a fighter. I mean, this dog wanted to live so badly. And until that fire went out in his eyes, I was not going to give up on him."

Taka’s owners surrendered him after the fire due to the extent of his injuries. Lesley kept Taka at her home for a few days until things got "pretty bad."

From there, she took him to Columbia, South Carolina, to see another specialist. And so began Taka’s long road to recovery.

RELATED: Grieving dog owner gets surprise when trying to return unused pet food: ‘It was so touching’

Doctors in South Carolina ended up keeping Taka for more than a month. Lesley would drive 75 miles each way to see him on weekends until he was well enough to leave.

Taka returned to Lesley’s vet clinic, where employees dressed Taka’s wounds twice a day. But there were a couple of areas, one on his back and one on his head, that wouldn’t heal. 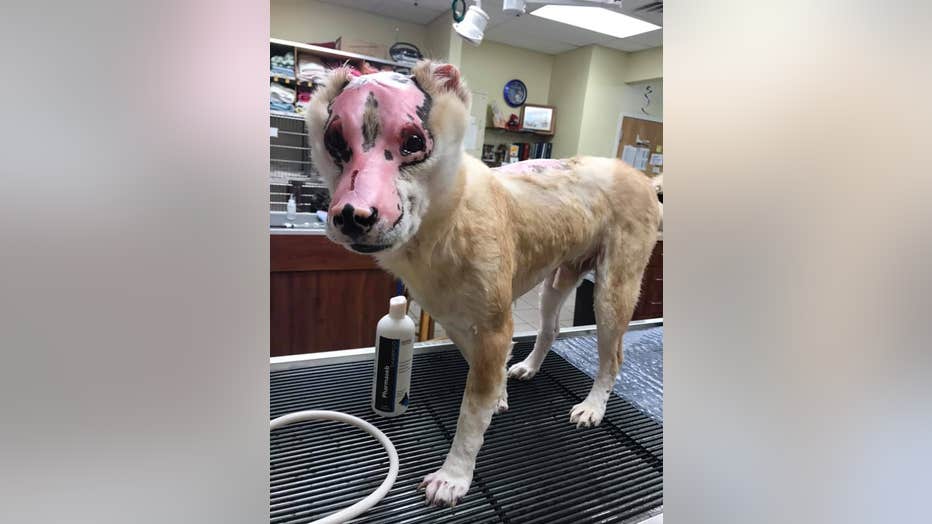 Then, a team at JMS Burn Center at Doctors Hospital of Augusta contacted Lesley: They wanted to help.

"They said, ‘We can do skin grafts on him. We’ve never done one on an animal before, but we are willing to try,’" Lesley recalled.

Not long after, a team of 17 people from the burn center arrived at the vet’s office and got to work. In addition to the problem areas on his head and back, Taka’s eyes had peeled back as they healed, which made him unable to blink.

He had to have reconstructive surgery for his eyelids, hence the "bushy eyebrows," but other than diminished eyesight from the fire, Taka has no issues. 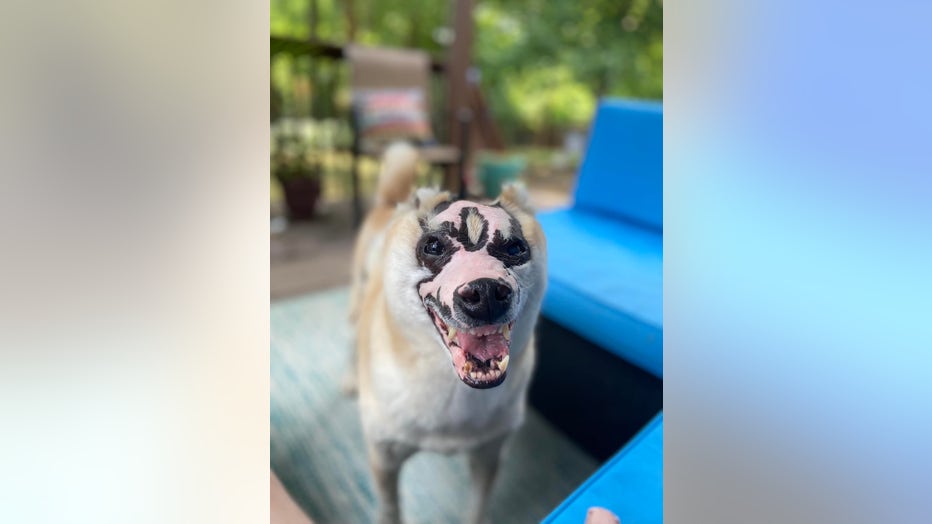 The JMS Burn Center that helped treat Taka had asked in the past about him visiting the hospital, but he had to be a certified therapy dog first. Lesley hadn’t given it much thought until Taka started formal training — then she realized how smart he is.

"There were a lot of things we had to work on. He has to be able to sit outside of a room and stay until I tell him it’s OK to come in. He has to know if gurneys are coming down and step to the side," Lesley explained. "Those were difficult for him because of his vision. He really has no depth perception. But we worked on it, and he did great."

Once Taka passed his therapy dog test, it didn’t take long for him to reach superhero status. The burn center called Lesley and asked if Taka could be featured in a coloring book for the Burn and Reconstructive Centers of America Foundation. 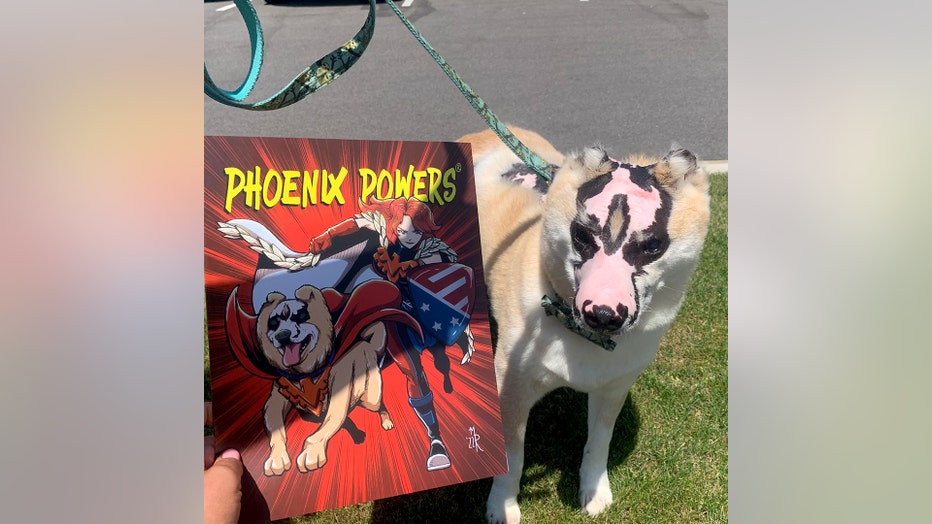 About six months later, Taka the superdog was on the cover of "Phoenix Powers," the story of a superhero and her canine sidekick who go from house to house and teach fire safety to children and families.

"The kids love him," Lesley said. "It brightens their day to see something they can kind of relate to, and see how well he’s done."

Thousands of people have followed Taka’s story on Facebook and Instagram; he’s even had fans from out-of-state show up to meet him. Lesley takes Taka to work with her every day. 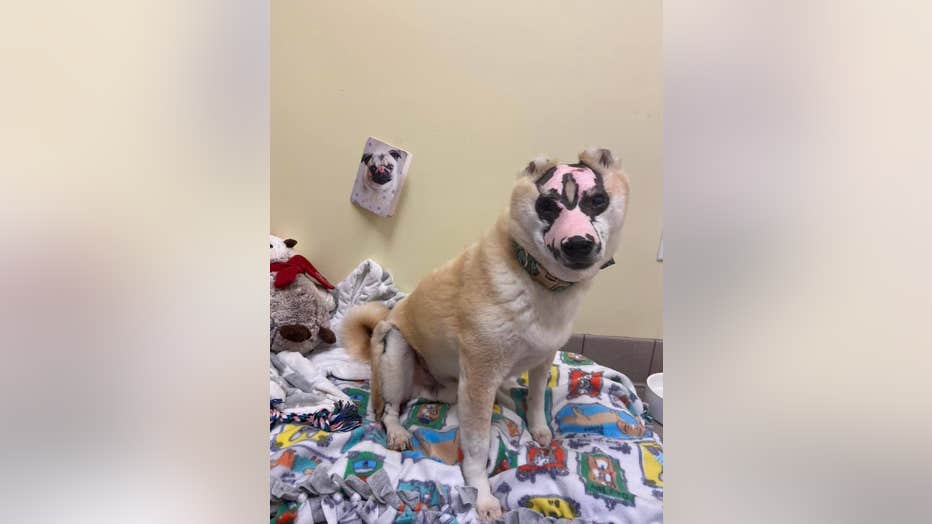 "He’s a little bit of a ham," Lesley said. "He loves the attention."

RELATED: Scientists explain how some dogs can remember their favorite toys

Taka doesn’t visit hospital rooms at the burn center anymore because there were some rooms that made him uncomfortable, and his happiness comes first, Lesley said. This summer, he’s been invited to two camps for burn survivors, where he’ll bask in even more attention and have "everybody poring all over him."

"It’s turned into a great thing I was not expecting," Lesley said. "He’s just Taka, and they love him."