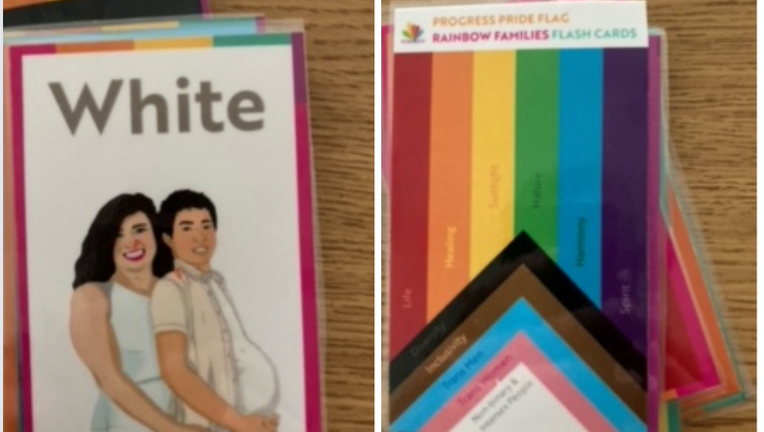 NEW YORK - A teacher in North Carolina used flashcards with LGBTQIA+ messages to teach her preschool class the colors of the rainbow, according to NC House of Representatives Speaker Tim Moore.

The legislator announced on his website that fellow lawmaker Rep. Erin Paré (R-Wake) had received an email from a concerned constituent last week alerting her to the use of the flashcards at Ballentine Elementary School in Fuquay-Varina, Wake County. Pare shared a photo of the cards which Moore posted to his site.

One of the cards depicted a woman hugging a pregnant man from behind.

The cards were not part of the approved curriculum.

"The district is concerned to learn of the inappropriate instructional resource found in a preschool classroom," district officials said in a statement Friday to The News& Observer. "In order to help fulfill the educational goals and objectives of the school system, we strive to provide high quality instructional materials that will enrich and support the curriculum and enhance student learning."

"I am grateful that a concerned constituent reached out and that this issue is being addressed in a swift and professional manner by Ballentine Elementary School," said Pare.

RELATED: Laverne Cox honored by Mattel with her own Barbie doll

The flash cards were reportedly made by a company called ByUs Box that sells "age-appropriate education to guide families in becoming actively anti-racist and inclusive."

"Schools should only be using age-appropriate materials, and these flashcards clearly do not meet that standard for a pre-school classroom. I hope schools across Wake County and the State of North Carolina will follow the example of Ballentine and respond swiftly when a parent expresses concern and ensure that materials like this are not being used to teach young students," said Pare.

According to Moore, a poll released last week, showed 57% of North Carolina voters supported the idea of passing legislation that would  "make parents the primary decision-makers regarding their child’s health and medical decisions and provide parents with opt-out options regarding controversial surveys or age-inappropriate classroom materials."

"I can think of a hundred other ways to teach colors to pre-school children," wrote Superintendent Catherine Truitt on Twitter. "Classroom materials need be age appropriate, and this certainly doesn’t meet the mark."

Senate Republicans in North Carolina were moving forward with legislation that would bar sexual orientation and gender identity lessons in K-3 classrooms. The "Parents Bill of Rights," could be voted on as early as Tuesday, according to various published reports.