A 14-year-old girl admits to setting the devastating fire in a Peachtree City Walmart last week. Officers believe she may have started the fire on a whim.

PEACHTREE CITY, Ga. - Peachtree City police have made an arrest in the four-alarm fire that caused massive damage to a local Walmart.

FOX 5 has confirmed that a 14-year-old girl has been arrested in connection with the fire. Investigators have not released the suspect's name.

Investigators tell FOX 5's Doug Evans that they are nowhere close to determining a motive for the alleged arson, which started in the paper products aisle of the store.

The fire broke out shortly before 7:20 p.m. on Wednesday, Aug. 24 at the Walmart located on 2717 Georgia Highway 54. Another alert was given to firefighters when the sprinklers went off in an attempt to begin to suppress the blaze. 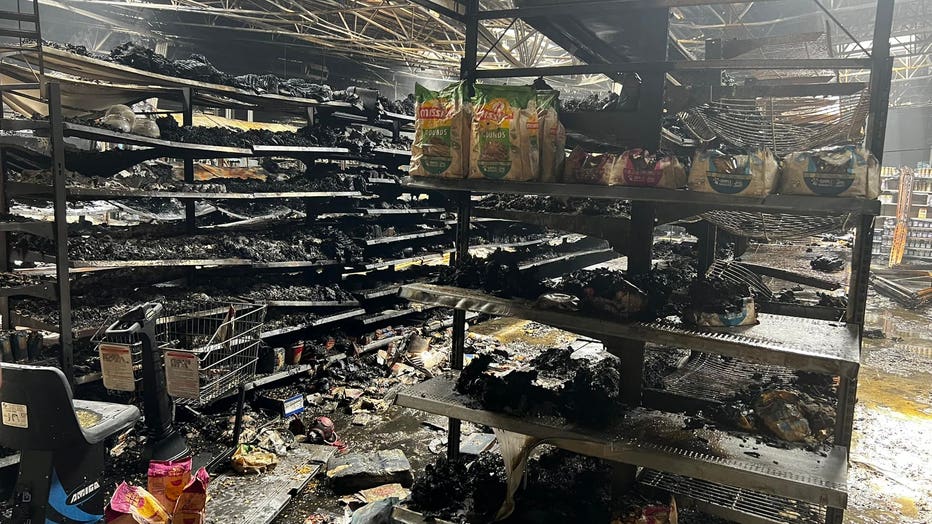 "A building like this has a large fire load, fire load meaning the materials stored inside the building," Peachtree City Fire Department Assistant Chief Wil Harbin.

Peachtree City police officers were the first at the scene. Body cam video released on Thursday shows those officers running through the store to make sure everyone was evacuated.

Body cam video released a day after a fire gutted a portion of the Peachtree City Walmart shows officer frantic running through the store just minutes after being called to the scene to make sure everyone was out. Investigators now believe that fire was intentionally set and are asking anyone in the store at the time to contact them.

"Anybody else in here? Everybody out!" one officer could be heard yelling.

Three of those officers had to be taken to the hospital after being overcome by smoke.

Firefighters with Peachtree City, Coweta County, Fayetteville, and Fayette County fire departments arrived soon after to find a rack of merchandise on a back row of the store ablaze. The flames at that point had been licking at the roof for a few minutes and had begun to make it unstable.

Firefighters responded to a fire at the Walmart in Peachtree City on August 24, 2022. (Doug Evans / FOX 5)

Departments battled the fire throughout the night until it was extinguished around 4 a.m. Thursday.

Thankfully, no one was seriously injured.

Peachtree City fire investigators will try to determine the cause of a fire that broke out inside the Walmart, ultimately sparking a multi-alarm response from several agencies.

The store did suffer extensive damage to the interior and roof.  There is no current timeline on when the store will be reopened.

Anyone with information, video, or images related to the cause of the fire is asked to contact Sgt. Brad Milstein at bmilstein@peachtree-city.org. You can also submit an anonymous tip over the phone at 770-487-6010 or online.